Overview of the EUR/USD pair. August 13. The Fed is racing at full speed to end the QE program. 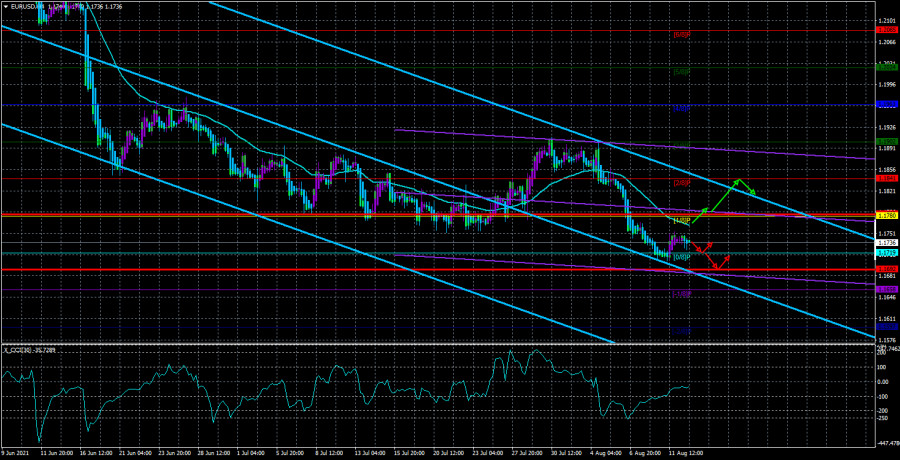 On Thursday, August 12, the EUR/USD currency pair moved as if it were the Christmas holidays. However, the foreign exchange market is open for some reason. The pair's movements remain extremely weak. For example, the volatility before the opening of the US session was 14 points. Earlier, we said that "the pair is standing still" figuratively, and now everything is literally so.

Moreover, if you look at the pair's movement on a 24-hour timeframe, you will get the impression that the volatility is quite normal. However, this is a deception of vision. It is only necessary to pay attention to the chart's scale or the volatility indicators for each day (a corresponding illustration below). It immediately becomes clear that there is no question of any trend movement now. The pair is declining, but it is doing so slowly that transactions need to be opened within a "week" period to earn something. Of the last ten trading days, five ended with a volatility of fewer than 50 points. In some trading sessions, the pair does not move at all. Over the past 30 days, the average volatility has already decreased to 56 points, although its normal value is more than 65-70. As for the fundamental and macroeconomic background, it is very difficult to say whether traders pay at least some attention to it. No, important macroeconomic reports are mostly regularly processed. However, it should be understood that there are 1-2 such reports within a week. And the rest of the time - the pair stands still.

Given that the US currency is still gradually getting more expensive, it can be assumed that the downward correction round within the global upward trend is still not completed and is very much delayed in time. However, at the same time, the price does not continue to decline. The level of 17 was worked out only with a stretch, and the price did not try to leave below it. Recall that we have repeatedly called the level of 1.1700 - the target for the current decline of the pair, after which a new upward trend should begin. Thus, this forecast is not canceled yet, but it is not implemented either.

Meanwhile, the fundamental background is becoming more favorable for the US currency. The main thing is whether the dollar will be able to extract any dividends from this? Recall that for the first time, the idea of possible curtailment of the QE program at the Fed was voiced at the meeting before last, when Jerome Powell mentioned this at a press conference. However, in the next few weeks and even months, Powell himself never confirmed that the regulator had already begun discussions about ending the QE program. From time to time, someone from the monetary committee raised this issue, but without due zeal and pressure. The markets understood from all this that the Fed seems to be preparing to start discussing this issue, but it is unknown when this will happen. However, this week, four members of the Fed's board have already spoken out in favor of the fact that inflation has already accelerated sufficiently. Thus, the regulator should start a discussion about ending incentives in the near future. This idea was voiced by Raphael Bostic, Thomas Barkin, Charles Evans, Robert Kaplan, and Esther George. The Federal Reserve Bank of Kansas City president, Esther George, said that the Fed has already made sufficient serious progress in accelerating the economy and restoring the labor market, so the QE economic stimulus program should already be completed. "The recovery process is continuing, and it should be followed by a transition from emergency measures to more neutral ones," George said. The same opinion was voiced by the head of the Federal Reserve Bank of Dallas, Robert Kaplan. He said that the Fed should begin to wind down the quantitative stimulus program in October of this year. However, naturally, we are talking only about reducing the volume of the QE program and not about its completion. Thus, the Fed may move to curtail asset repurchases from the open market this fall, but what does this mean for the US dollar?

From our point of view, for the next year, this means little for the dollar. In itself, the fact of curtailing QE is all a positive factor for the US currency. However, we are not talking about the completion of the program but only about reducing its volume. The Fed may reduce the program for a year or two. It will be a very smooth and careful completion of the stimuli, ready at any moment (if necessary) to increase in size again. Thus, the money supply in the US will continue to increase at a very high pace after the fall of this year, even if the Fed decides to reduce QE. The US dollar has already risen in price by 550 points in the last 2.5 months. After such a long descending segment, an ascending one is already necessary. The bears have been showing their extreme weakness for a long time and are pushing the pair down with great difficulty. Technical factors remain on the side of the European currency. Thus, we still expect the end of the current downward trend and the beginning of the formation of a new one, within which the upward movement should resume with a minimum target near the 22nd level. We believe that absolutely nothing has changed globally for the pair. The fundamental global factor also indicates the infusion of hundreds of billions of dollars into the US economy. The global technical factor suggests the continuation of a long-term upward trend. 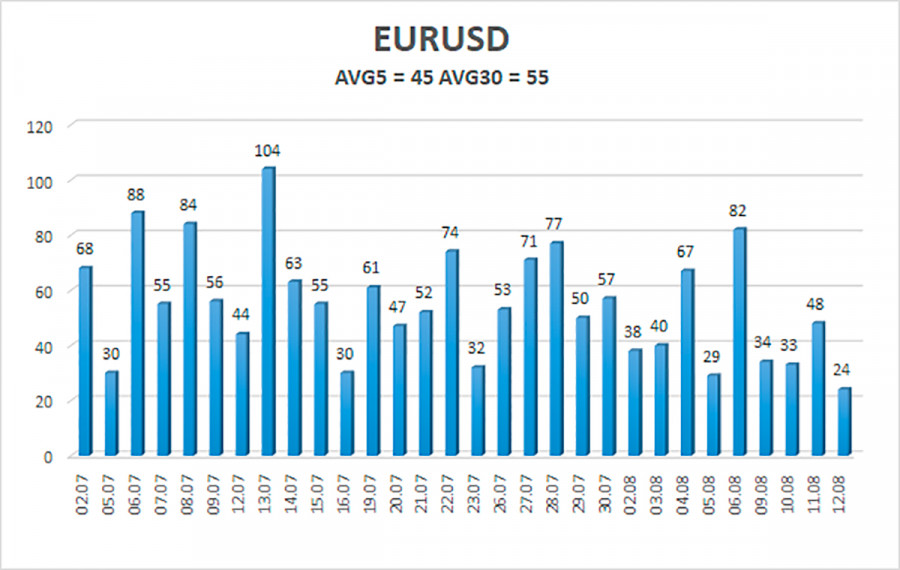 The volatility of the euro/dollar currency pair as of August 13 is 45 points and is characterized as "low." Thus, we expect the pair to move today between the levels of 1.1692 and 1.1782. The reversal of the Heiken Ashi indicator downwards signals the resumption of the downward movement.

The EUR/USD pair has started a round of corrective movement, which has not yet been completed. Thus, today we should consider new short positions with targets of 1.1692 and 1.1658 in the case of a downward reversal of the Heiken Ashi indicator. Purchases of the pair will be possible if the pair is fixed above the moving average line with a target of 1.1841 before the Heiken Ashi indicator turns down.

Interesting? Write a comment below.
 Overview of the EUR/USD pair. August 13. The Fed is racing at full speed to end the QE program.
Forward 
Backward 