Overview of the EUR/USD pair. August 19. Afghanistan, Jackson Hole, and the Fed meeting in September. 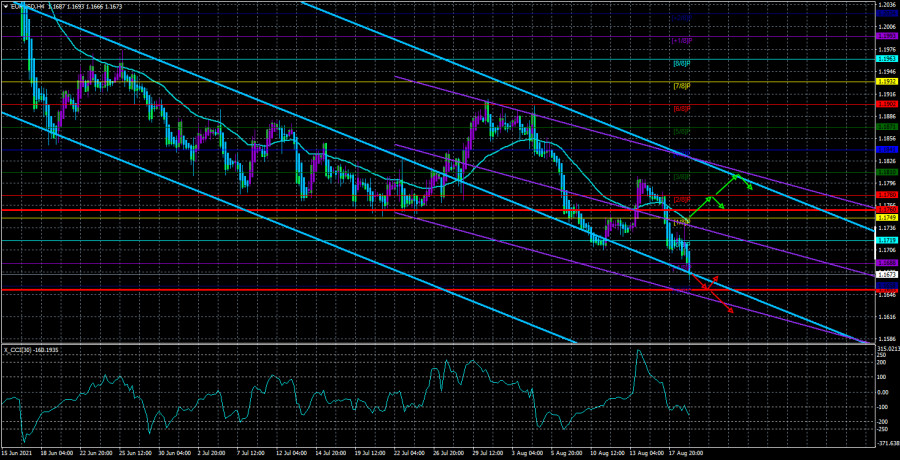 The EUR/USD currency pair moved very calmly again on Wednesday. In principle, few people now expect the pair to trade actively for two whole days in a row. And since the movement was quite active on Tuesday, everything spoke in favor of the fact that the pair would again stand in one place on Wednesday. As we expected a day earlier, even the report on European inflation in no way helped the markets to trade more volatile. As for the number one topic for the whole world (Afghanistan), market participants showed on Wednesday that they might no longer be interested in this factor. However, let's look at all the questions in order. First, "technique." The most important thing that should be noted now is the decline in the pair's quotes below the level of 1.1704, which is the local minimum of August 11 and the minimum of the last global round of correction, which ended on March 31. Thus, the bears have shown that they have specific forces for further going down. However, the probability of a final rebound from the 17th level was very high. However, the markets continue to buy the US dollar, albeit rather slowly. The fall in the pair's quotes on Tuesday was somewhat accidental since all the macroeconomic statistics of that day were not entirely in favor of the US currency. However, the markets panicked a little that day because of the events in Kabul and Afghanistan in general. Thus, the US currency rose, as they say, out of the blue. Recall that the markets are frankly afraid of various kinds of geopolitical conflicts or tensions in various dangerous regions. Thus, the US currency has the property of growing during such events as now in Afghanistan. The problem is that it is impossible to predict these events. As well as at what point the markets will decide to work out this or that event.

It should be noted that we still expect the resumption of the global upward trend and believe that the second round of the corrective movement (on the 24-hour timeframe) has a real chance to end in the near future. However, so far, the bulls do not have enough strength to start moving the pair north. Therefore, technical analysis speaks in favor of maintaining the downward movement. Therefore, we need to continue to consider trading on a decline.

As already mentioned, the events in Afghanistan now have a specific impact on the foreign exchange market. However, from our point of view, this impact can be extremely short-lived. It should be understood that the growth of the dollar by 2-3 cents against the euro on one event alone is quite a lot. For example, over the past three months, the US currency has grown by 550 points. Therefore, it may well be the markets' reaction on Tuesday to the events in Kabul and the change of power in Afghanistan, thanks to which the Taliban group became the head of state. At least, there were no signs of a new strengthening of the US currency on Wednesday.

Separately, it should be noted that the markets are completely focused on the Fed's monetary policy and the upcoming speeches of Jerome Powell. On the same Tuesday, late in the evening, Powell spoke with representatives of the education sector. However, almost none of the issues of interest to the market were fully touched upon there. Thus, now the markets are waiting for an economic symposium in Jackson Hole, where Powell will also speak, and then the September meeting of the Fed, during which the Fed may announce the beginning of the curtailment of the quantitative stimulus program. The latest macroeconomic reports (on retail sales and consumer confidence) turned out to be quite weak, and Jerome Powell has repeatedly stated that the American economy is not yet ready for the end of the stimulus.

Moreover, now there is an increase in cases of "coronavirus" in the United States, which can have a very negative impact on the pace of recovery of the American economy. But in any case, the market is waiting for information about this. Only Powell's "hawkish" rhetoric and the Fed's readiness to start curtailing the QE program as soon as possible can help the dollar to go below the 17th level. However, we are not sure about this particular scenario. 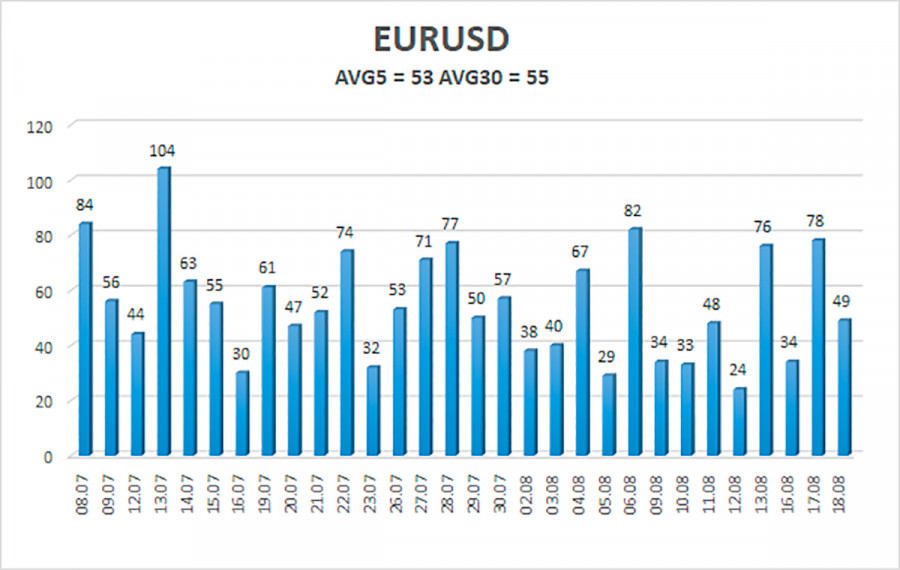 The volatility of the euro/dollar currency pair as of August 19 is 53 points and is characterized as "average." Thus, we expect the pair to move today between the levels of 1.1653 and 1.1760. A reversal of the Heiken Ashi indicator upwards will signal a new round of upward correction.

The EUR/USD pair has started a new round of downward movement. Thus, today, you should stay in short positions with targets of 1.1655 and 1.1600 until the Heiken Ashi indicator turns up. Purchases of the pair will be possible if the pair is fixed above the moving average line with targets of 1.1780 and 1.1810 before the Heiken Ashi indicator turns down.