Overview of the EUR/USD pair. August 2. Preview of the week. The US dollar is waiting and hoping to see strong reports from 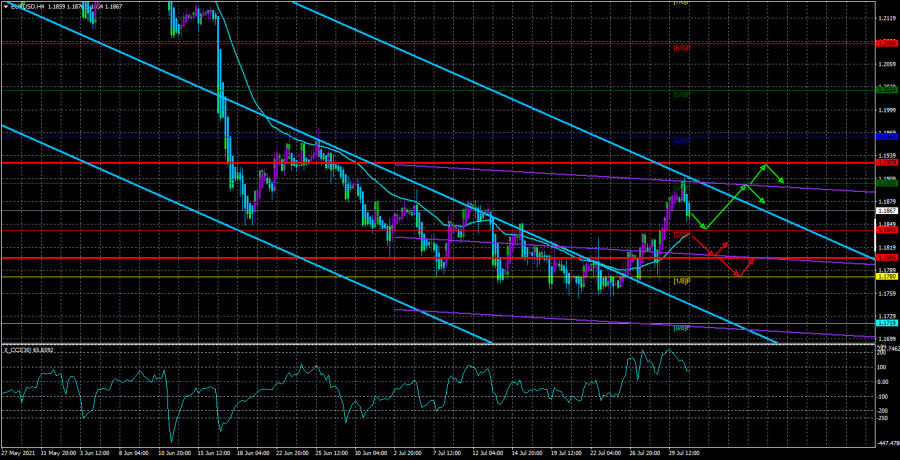 The EUR/USD currency pair began a round of downward correction, which cannot be said to be brewing, but did not come as a big surprise. Recall that the euro/dollar pair has been trading mainly without a clear direction of movement and with low volatility in the last few weeks. Thus, after several days of growth, traders caught themselves and immediately began to fix profits on long positions. Recall that we expect the continuation of the upward movement and the resumption of the global upward trend. However, the European currency did not want to overcome the level of 1.1760 at first, and now it can't start a hike to the north. For example, the pound has grown by 400 points for almost two weeks, and only after that, it began to adjust. However, the euro rose by 150 points and also began to adjust. It should also be said separately about the macroeconomic statistics of last week. We have already talked about the Fed meeting, which caused a very modest reaction of the markets. But the statistics published on Thursday and Friday in the United States and the European Union were completely ignored by traders. Recall that on Thursday, the US published a report on GDP for the second quarter, which turned out to be significantly lower than forecasts. The euro continued to rise in price slowly. On Friday, the European Union published data on unemployment, inflation, and GDP, which became better than forecasts. However, it did not cause any strengthening of the European currency. Thus, we continue to draw traders' attention to the fact that macroeconomic statistics continue to have a very indirect impact on the foreign exchange market. Since the European currency has been declining more recently than it has become more expensive, it is still impossible to conclude with confidence that the fundamental global factor in the form of an infusion of trillions of dollars from the Fed into the US economy continues to work. Nevertheless, we believe that this is the case, which means that the US currency will continue to depreciate.

There will again be plenty of important and interesting information of a macroeconomic nature in the new trading week. Of course, most of this data can be easily and ignored by the markets, and there is nothing to be done about it. However, it is not recommended to ignore these reports. In the European Union, an index of business activity in the manufacturing sector, a similar index for the service sector, and a report on retail trade will be published within a week. We believe that none of these reports will cause a strong market reaction or any reaction at all. Here you should make one remark. We call the "market reaction to a report or event" the immediate start of price movement in the appropriate direction. If the report is released and the movement continues in the same direction and with the same force as before, it is impossible to interpret it as a market reaction unambiguously. Thus, there may be a reaction of traders to all the European data in the form of a movement of a couple of points by 10-15. And who is interested in a 10-point movement?

There will certainly be more different statistics in the States this week. The ISM business activity index will be published on Monday. On Wednesday, changes in the number of employees in the private sector ADP and business activity index in the service sector ISM. On Friday, Nonfarm Payrolls, the unemployment rate, and the change in average wages. Although all these reports are more or less important, we believe that a reaction may follow to data from ADP and Nonfarm Payrolls in the current conditions. Recall that at the last meeting of the Fed, Jerome Powell again made it clear that the completion of the quantitative stimulus program and the increase in rates are entirely dependent on the recovery of the labor market in the United States. Therefore, there is no doubt that the following dependence can be made: the recovery of the labor market to pre-crisis values is equal to the curtailment of the QE program and the increase in rates. Therefore, in the coming months and until the end of the year, the reports on the labor market and the labor force will be of the highest importance for the markets. According to experts' forecasts, the number of new employees in the private sector will be 700-715 thousand in July, and the number of Nonfarm will be 900 thousand. These are very high forecasts. Recall that according to the Fed, at this time, the number of workers in the United States is 7 million lower than before the pandemic. Our calculations suggest that the labor market can fully recover in 14-15 months. However, if Nonfarm grows by a million a month, then the Fed will curtail the quantitative stimulus program by the end of this year. Thus, a lot for the US dollar will now depend on the data on the labor market. Strong data may return demand for the US currency or provide it with strong support. Weak data on the labor market can only put even more pressure on the position of the US currency and increase the negative effect on the currency from the Fed's actions.

From a technical point of view, the price is now located above the moving average line, so the trend is currently upward. Thus, a rebound of the price from the moving average can provoke a resumption of the upward movement. We do not yet see any serious reasons to expect a resumption of the dollar's growth (that is, the fall of the euro/dollar pair). Thus, we do not consider this option seriously. However, it should be remembered that this is a foreign exchange market, which has a huge number of participants. And it is the behavior of these participants that forms the course of the pair. Accordingly, it should always be remembered that it is impossible to predict the direction of movement with a probability of 100%. Therefore, we consider long positions as long as the price is located above the moving average. 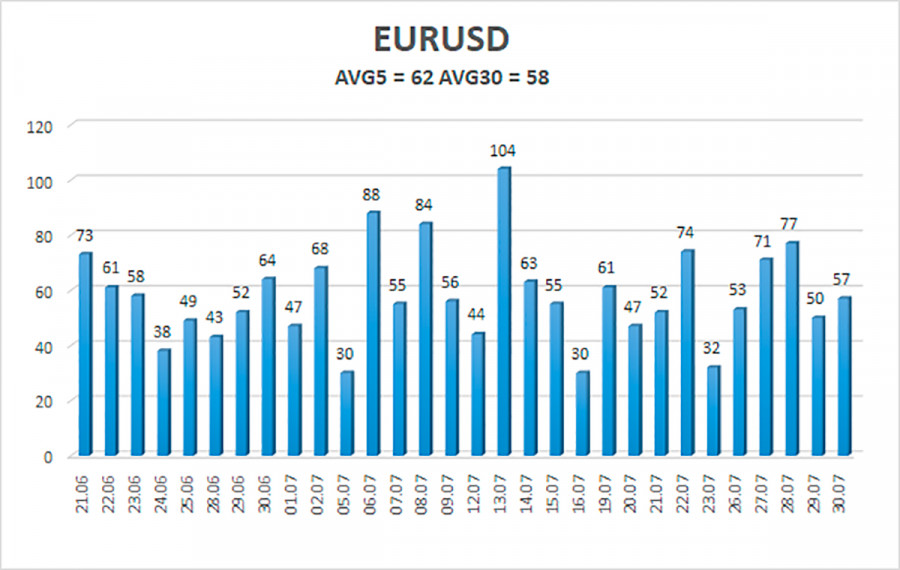 The volatility of the euro/dollar currency pair as of August 2 is 62 points and is characterized as "average." Thus, we expect the pair to move today between the levels of 1.1805 and 1.1929. A reversal of the Heiken Ashi indicator to the top will signal the resumption of the upward movement.

The EUR/USD pair has started a round of downward correction. Thus, today we should consider options for opening new long positions with targets of 1.1902 and 1.1929 after the Heiken Ashi indicator turns upwards or in the case of a price rebound from the moving average. Sales of the pair will be possible not before the price is fixed back below the moving average line with targets of 1.1805 and 1.1780.

Interesting? Write a comment below.
 Overview of the EUR/USD pair. August 2. Preview of the week. The US dollar is waiting and hoping to see strong reports from
Forward 
Backward 