Overview of the EUR/USD pair. August 20. The Fed is the hope and support for the US currency. 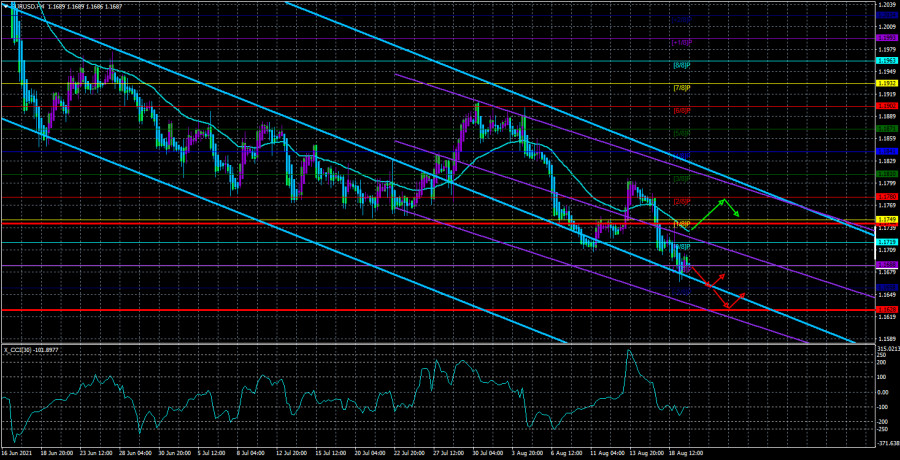 The EUR/USD currency pair continued its downward movement on Thursday. The main thing is that the strengthening of the US currency continues. And we need to understand the reasons for this growth and determine the prospects of the currency pair for the next few days and weeks. Let's start with "technology." Since the price is located below the moving average line, and both linear regression channels are directed down, the direction of the trend does not raise any questions. Therefore, traders should still trade more actively on the downside, and long positions can be considered when at least one of the linear regression channels turns up. It should also be noted that the volatility of the euro/dollar pair remains very weak, about 50 points a day. Therefore, the strengthening of the dollar cannot be called strong either. Instead, the pair's quotes continue to "slide" down, but one way or another – this is the growth of the US dollar. We have been waiting for a long time for the pair to start forming a new upward trend. Several global fundamental factors speak in favor of this at once. However, recently, several factors have also appeared that speak in favor of continuing the growth of the US dollar. These factors appeared literally in the last few weeks. Recall that it all started with the Fed meeting the day before last, at which, for the first and last time, Jerome Powell spoke about the possible curtailment of the QE program. For the next two months, Powell did not say a word about this program and its possible curtailment.

However, then this was enough for the markets to make the dollar rise by 250 points. And then, another kind of news began to arrive, hinting that the American regulator could start curtailing the QE program as early as 2021. Macroeconomic statistics supported it. Recall that the consumer price index has risen to 13-year highs in recent months, and Non-Farms account for almost 1 million new jobs outside the agricultural sector for two consecutive months. Well, last week, several representatives of the Fed's monetary committee announced their readiness to vote "for" curtailing the stimulus program at the September meeting. Thus, all this significantly improves the prospects of the US currency. However, it does not cancel the original plan, according to which the US dollar can start a new long-term decline at any time.

We want to focus readers' attention on the fact that the Fed will not curtail the QE program in one day. Therefore, at this time, the situation is simply escalating before the September meeting of the Fed. And when the regulator announces the possible or exact timing of the completion of the incentive program, this will mean a gradual reduction in the volume of this program. In other words, the injections into the American economy will not stop overnight. But now, they are about $ 120 billion a month, and they will be 100 or 80 billion over a certain period. Then they can be reduced a little more. In general, freshly printed money will still flow into the American economy, inflating the money supply. Therefore, the dollar still has an excellent chance of starting a new fall within the global downward trend (ascending - for the euro/dollar pair). What is the basis for the growth of the US currency now? Only on the market's expectations that the Fed will begin to curtail QE in the near future, which means tightening monetary policy and gives hope for a faster increase in the key rate. However, these are all expectations, not specifics. Therefore, we still do not believe too much in the dollar's prospects and still expect it to fall.

I want to touch on the topic of Afghanistan separately. At this time, the US currency may also become more expensive due to the difficult situation in Kabul. As we have already said, the markets do not like various military conflicts, military coups, a change of power in the country, and any geopolitical tensions. The US currency often grows at such moments, as the demand for it as a safe-haven currency increases. 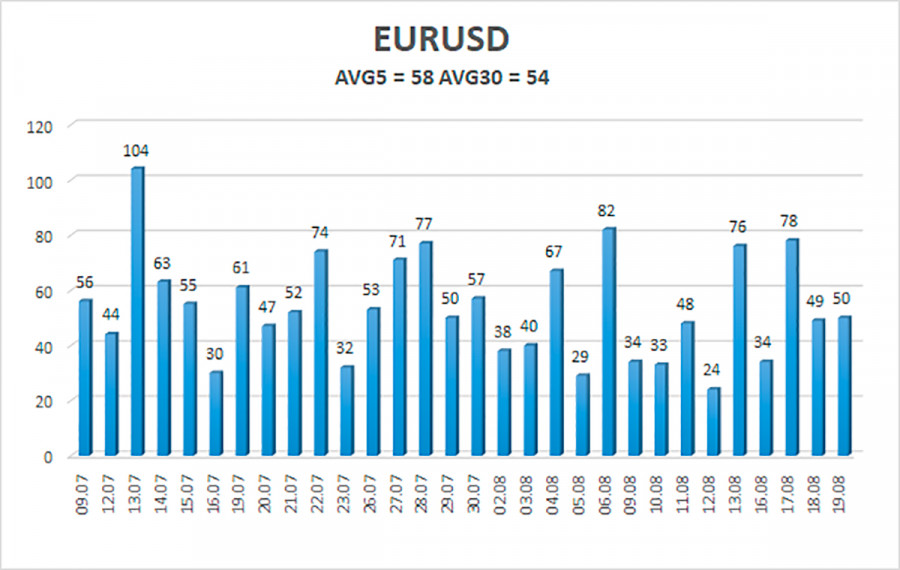 The volatility of the euro/dollar currency pair as of August 20 is 58 points and is characterized as "average." Thus, we expect the pair to move today between the levels of 1.1628 and 1.1744. The upward reversal of the Heiken Ashi indicator signals a round of upward correction.

The EUR/USD pair has started a new round of downward movement. Thus, today, you should stay in short positions with targets of 1.1658 and 1.1628 until the Heiken Ashi indicator turns up. Purchases of the pair will be possible if the pair is fixed above the moving average line with targets of 1.1780 and 1.1810, and they should be kept open until the Heiken Ashi indicator turns down.

Interesting? Write a comment below.
 Overview of the EUR/USD pair. August 20. The Fed is the hope and support for the US currency.
Forward 
Backward 