Overview of the EUR/USD pair. August 24. A symposium in Jackson Hole may decide the fate of the pair in the coming weeks. 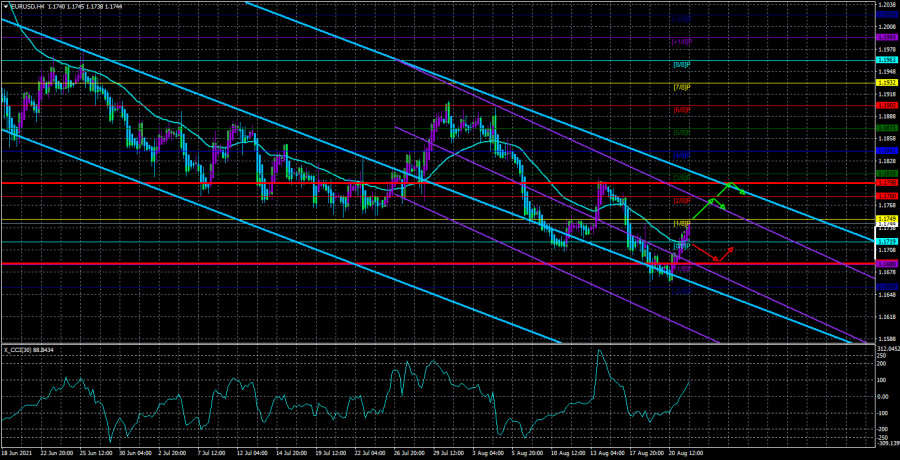 The EUR/USD currency pair was trading very calmly again on Monday. Although the volatility remains extremely weak, all the pair's movements are very conditional at this time. We mean the correction, which formally began on Friday. However, is it possible to consider removing quotes from the lows by 30-40 points as a correction? Thus, the upward movement continues for the time being, so there are certain chances of completing the downward trend on the 4-hour timeframe again. Therefore, at this time, overcoming the moving average does not mean anything. Let's recall the current disposition for the euro/dollar pair. The fundamental global factor in the injection of hundreds of billions of dollars into the American economy by the Fed remains unchanged. The US dollar is still in the risk zone. The global technical factor tells us that the upward trend on the 24-hour timeframe is not completed. Therefore, at this time, we have been observing a correction for six months. Thus, the upward trend should resume because the bears also failed to start during these six months. And only a local fundamental factor speaks in favor of possible further growth of the US currency. The fact is that in recent weeks, the dollar has received support as a safe-haven currency against the backdrop of the tense situation in Afghanistan. It received support against the background of a high probability of curtailing the Fed's quantitative stimulus program in the near future. However, the dollar cannot grow forever on these two factors, and it has not shown strong growth over the past six months. Thus, we still believe that the upward trend should resume. Moreover, the price has gone slightly below the level that we called the target for the second round of the global downward correction – 1.1700.

Now let's see what the macroeconomic and fundamental background will be this week. The main thing that should be understood now is whether the European currency will receive support so that our expectations come true? Several reports have already been published in the European Union and the United States on Monday. In particular, the indices of business activity in the services and manufacturing sectors. However, in Europe, they remained almost unchanged in August compared to July and remained at high values. Therefore, the markets did not react to this data in any way. About the same thing happened in the United States. And in principle, these reports are far from the most important, and their reactions could be expected if the actual value did not correspond very much to the forecast. Nothing is interesting in the calendar of macroeconomic events on Tuesday. ECB Vice-President Luis de Guindos will deliver a speech in the EU on Wednesday. However, it has been a long time since he has pleased the markets with really important information. In the United States, a report on orders for long-term goods will be published on this day. Previously, this was a very important report, since this category of goods is very expensive. However, in the last year, traders rarely react to it. On Thursday, the ECB will publish a report on monetary policy from its last meeting, and the US will release a report on GDP for the second quarter in the second assessment. Recall that the first estimate was very disappointing since, with a forecast of +8.5% q/q, the actual value was only 6.5%. However, even then, traders did not react to this report in any way. Most likely, it will also be with the second assessment. The report on applications for unemployment benefits is even less likely to provoke a reaction.

On Friday, the EU news calendar is empty. In the US, data on personal income and expenses of Americans, as well as the consumer sentiment index from the University of Michigan, will be published. The day's main event will be the speech of the head of the Federal Reserve, Jerome Powell. It is the performance of Jerome Powell at Jackson Hole, which everyone has been talking about for several weeks. Unfortunately, the probability that Powell will start voicing the Fed's plans to wind down the QE program at an event of a more scientific nature is extremely low. We believe that the maximum that should be expected from the Fed chairman is hints and half-hints about possible actions of the regulator in the near future. However, these hints may well be enough for the dollar to start getting more expensive again. As a result, it turns out that there will be practically no important events for the dollar and the euro during the entire trading week. And only on Friday, the currency pair will have a fairly high chance of showing a strong movement. Thus, the European currency may try to grow until Friday. If the bulls do not cope with this task (correction), then it will not make sense to talk about forming a new upward trend now. Thus, buyers have four trading days when they will practically not be disturbed by macroeconomic statistics or the fundamental background. The primary task is to overcome the moving. The second task is to fix it above this line and hold it in these positions. The dollar has been growing for two months, so the chances of strengthening the European currency are growing. 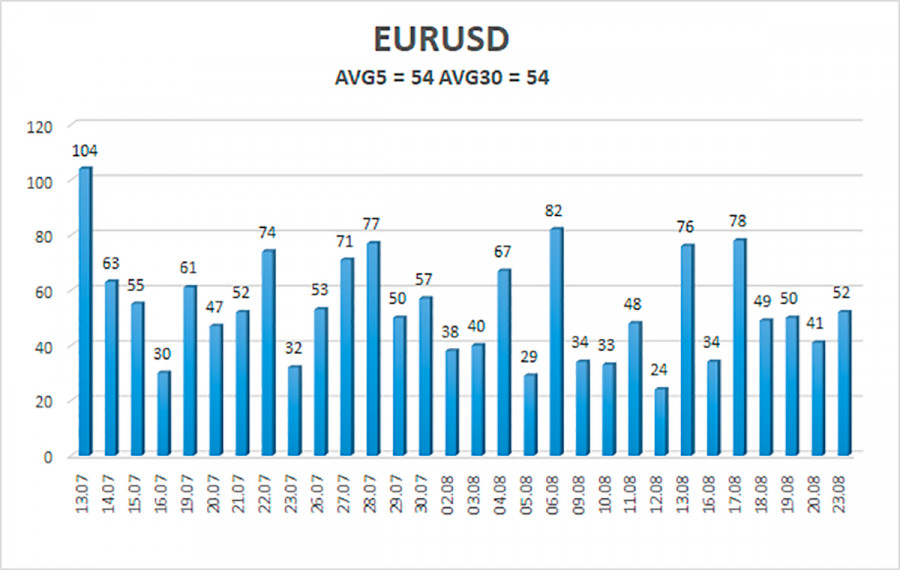 The volatility of the euro/dollar currency pair as of August 24 is 54 points and is characterized as "average." Thus, we expect the pair to move today between the levels of 1.1690 and 1.1798. A reversal of the Heiken Ashi indicator downwards signals a round of downward correction.

The EUR/USD pair has started an upward movement. Thus, today, you should stay in long positions with targets of 1.1780 and 1.1798 until the Heiken Ashi indicator turns down. Sales of the pair will be possible if the pair is fixed back below the moving average line with targets of 1.1688 and 1.1658, and they should be kept open until the Heiken Ashi indicator turns up.

Interesting? Write a comment below.
 Overview of the EUR/USD pair. August 24. A symposium in Jackson Hole may decide the fate of the pair in the coming weeks.
Forward 
Backward 