Overview of the EUR/USD pair. August 25. The Fed was afraid of the "coronavirus" and changed its mind about curtailing QE. 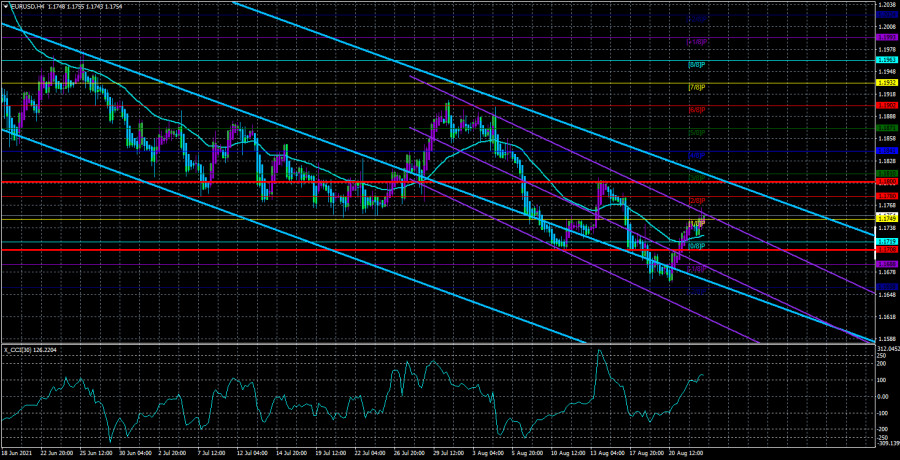 The EUR/USD currency pair continued to trade very calmly on Tuesday. The volatility again left much to be desired. However, the pair remained above the moving average line, so now the formally upward trend remains relevant. "Formally" - because both linear regression channels are still directed down, and the price is only slightly above the moving average. In addition, over the past few months, the pair has repeatedly overcome the moving average. However, at the same time, it could not continue to move up. Thus, although the local fundamental background seems to have begun to change in favor of the European currency, we are still not sure that the pair's quotes will continue to grow. The fact is that now the euro/dollar is at a fork point. The pair reached the level of 1.1700, which we called the target for the second round of the corrective movement against the global upward trend. Thus, it would be very logical if a new upward trend started from the current positions.

At the same time, the correction has been too long, and the markets seem to believe that the Fed will be ready to declare its readiness to curtail the quantitative stimulus program in September. Or they thought it until the moment when the president of the Federal Reserve Bank of Dallas, Robert Kaplan, said that he was ready to reconsider his attitude to the QE program in the near future. Kaplan is considered one of the most powerful "hawks" in the monetary committee and was the first to talk about curtailing QE. However, in recent weeks, an increase in cases of infection with the "coronavirus" has continued in the States. As it turned out on Monday, business activity in the services and manufacturing sectors continues to decline. The only thing that saves these indicators now is the fact that they initially climbed very high. Thus, they can fall to the level of 50.0 for a very long time. Recall that it is the value of business activity less than 50 that can be considered negative. Thus, it is still impossible to say that the new wave of pandemics harms the American economy. However, it is still a risk. It is still a threat. If the number of cases of diseases continues to grow, then even if the majority of patients are treated at home, this will still affect business activity, the economic activity of the population, and the most sensitive sectors of the economy, such as tourism, transportation, and the service sector. People will be afraid of getting sick again, so they prefer to stay at home and not go out once again. Of course, now that there are a sufficient number of vaccines and vaccination continues in full swing, much fewer Americans are afraid of COVID and prefer isolation to an active lifestyle. However, in any case, a new "wave" may slow down the economic recovery. Thus, the words of Robert Kaplan that if the "coronavirus" continues to spread across the United States of America at the same or faster pace, then it may be necessary to abandon the curtailment of the QE program in the near future, brought down the arrogance of dollar buyers.

In principle, nothing is surprising in this statement. We believe that the recent strengthening of the US currency was provoked solely by the traders' belief in the tightening of the Fed's monetary policy. However, we have already noted that the labor market is still very far from its pre-pandemic levels, and inflation has stopped accelerating in recent months. Thus, at the moment, the Fed has no good reasons for immediately curtailing the QE program. Of course, the Federal Reserve may begin to reduce it at the end of 2021 or the beginning of 2022. And for this not to come as a surprise to the markets, it is advisable to announce your plans in advance. However, how much can the US currency strengthen on rumors and expectations of tightening alone? Please note that almost the entire last round of the dollar's growth (300-400 points) was provoked by conversations and rumors that the Fed may curtail QE. Thus, at this time, we believe that the dollar has exhausted its growth potential. Of course, the markets may think otherwise, so the decline in the euro/dollar pair quotes may resume. However, if we carefully consider all the factors, then at this time, a new hike to the north is more likely. And in any case, as long as the price is above the moving average line, you should trade for an increase. 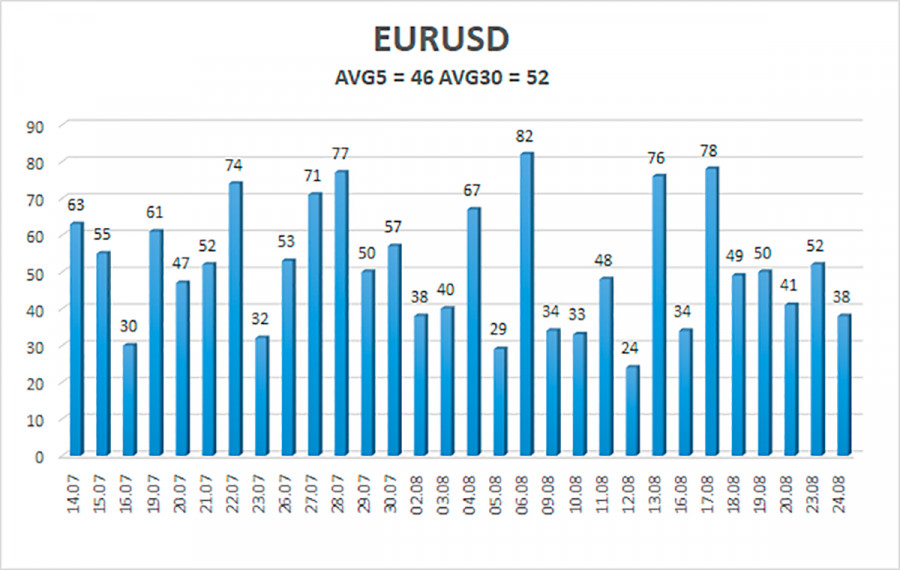 The volatility of the euro/dollar currency pair as of August 25 is 46 points and is characterized as "average." Thus, we expect the pair to move today between the levels of 1.1708 and 1.1800. A reversal of the Heiken Ashi indicator downwards signals a round of downward correction.

The EUR/USD pair continues its upward movement. Thus, today, you should stay in long positions with targets of 1.1780 and 1.1800 until the Heiken Ashi indicator turns down. Sales of the pair will be possible if the pair is fixed back below the moving average line with the targets of 1.1708 and 1.1688, and they should be kept open until the Heiken Ashi indicator turns up.

Interesting? Write a comment below.
 Overview of the EUR/USD pair. August 25. The Fed was afraid of the "coronavirus" and changed its mind about curtailing QE.
Forward 
Backward 