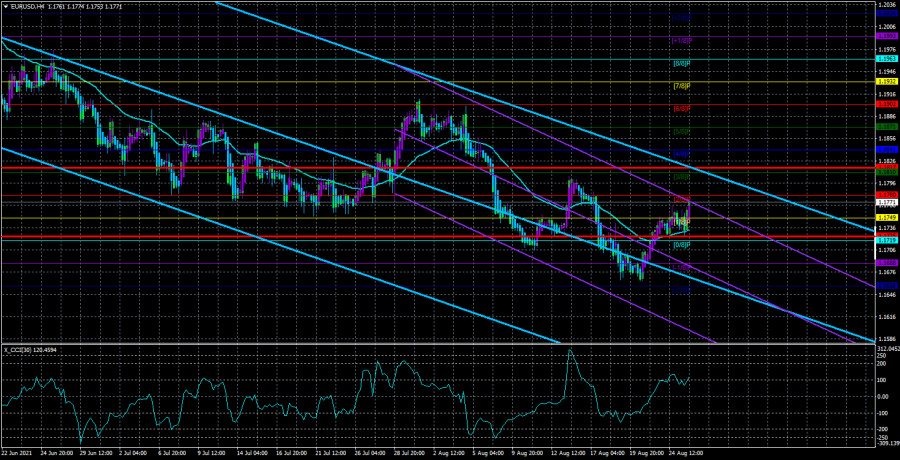 The EUR/USD currency pair continued to trade very sluggishly on Wednesday. If earlier we said that every three out of five days pass with minimal volatility, it is already every four days out of five. Yesterday, the pair again stood in one place for most of the day, not even trying to move more or less actively. The price continues to be located near the moving average line. However, the recent consolidation of quotes above it did not give any advantage to the European currency. It seems that the markets are still not set up for selling the dollar and buying its competitors. Therefore, once again, it should be stated: an attempt to start an upward trend looks unconvincing. However, there have been a huge number of such attempts recently. The price was fixed above the moving average line, but the bulls could not continue moving up each time. So this is just another failed attempt. Of course, it is still too early to put an end to the euro. Recall that this Friday, Jerome Powell will perform in Jackson Hole. Therefore, it is impossible to predict what will happen on Friday and what its results will be. Recall that the markets have been waiting for several weeks for specifics from Powell. Or a clear refusal to curtail the QE program in the near future. Or the announcement of clear deadlines when the program will begin to be curtailed. So far, Powell has not provided either, but several representatives of the Fed's monetary committee have already stated that they support the idea of reducing the stimulus program in September. However, a little later, it turned out that this is a wonderful illustration of the situation "with a pitchfork written on the water." Since one of the largest "hawks" of the Fed, Robert Kaplan, unexpectedly said that he was ready to abandon his previous opinion regarding the curtailment of the QE program in September, as the number of people with the "coronavirus" in the States is growing. And it does not matter at all why the number of cases is increasing. The main thing is that the country is facing another "wave" of the pandemic. Therefore, the American economy may begin to slow down in the near future. Or it already started. We also remember that the latest GDP report disappointed traders, as the actual value for the second quarter was 2% lower than the forecast. Thus, it is better to wait for Friday and already clearly understand which direction the Fed will look until September 22 (when the next meeting will take place) and then draw conclusions. It seems that most market participants take just such a position, so we can only wait.

As for Powell's speech on Friday, the head of the Fed can either give the market what he is waiting for or ignore the market's desire to know everything about the QE program and the Fed's plans. If Powell says that the program will begin to be curtailed in the fall of 2021, this may cause new powerful purchases of the US currency. If Powell ignores this topic, then there will be no reaction to his speech at all, and the pair will remain in the same weakly volatile movement until the markets clearly understand what kind of monetary policy the Fed is waiting for them in the near future. We believe that Powell will not touch on this topic on Friday or touch on it in passing without saying anything important. To wait for the reports on Non-farms and inflation, which will be released in early and mid-September.

By and large, there are no more important topics for the dollar right now. We remind you that fundamental global factors remain not in favor of the US currency, as the money supply in the US continues to inflate, and inflation remains at an extremely high value. A record for the last 12-13 years. In technical terms, on a 24-hour timeframe, the entire current downward movement is nothing more than a round of correction against a global upward trend. Yes, that's right. The movement that has been going on for several months is only 500-600 points down after 1,800 points up. And the same situation is observed for the pound/dollar pair. The correction is even weaker relative to the entire upward trend. Therefore, the reasons for a new fall in the US currency remain very strong, but at the same time, the markets are not ready for new purchases of the euro/dollar pair. 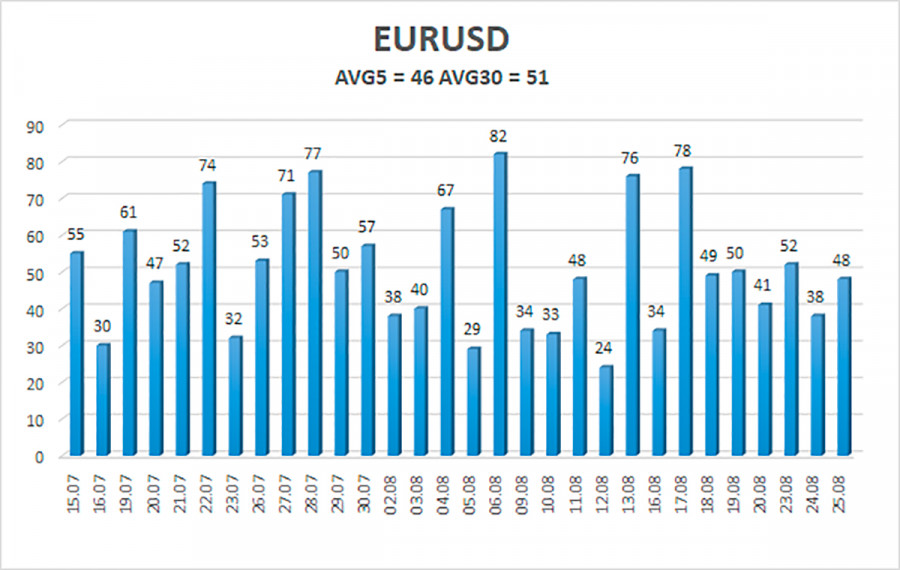 The volatility of the euro/dollar currency pair as of August 26 is 46 points and is characterized as "average." Thus, we expect the pair to move today between the levels of 1.1725 and 1.1817. A reversal of the Heiken Ashi indicator downwards signals a round of downward correction.

The EUR/USD pair continues its weak upward movement. Thus, today, you should stay in long positions with targets of 1.1810 and 1.1817 until the Heiken Ashi indicator turns down. Sales of the pair will be possible if the pair is fixed back below the moving average line with targets of 1.1688 and 1.1658, and they should be kept open until the Heiken Ashi indicator turns up.