Overview of the EUR/USD pair. August 3. A calm start to a potentially very important trading week. 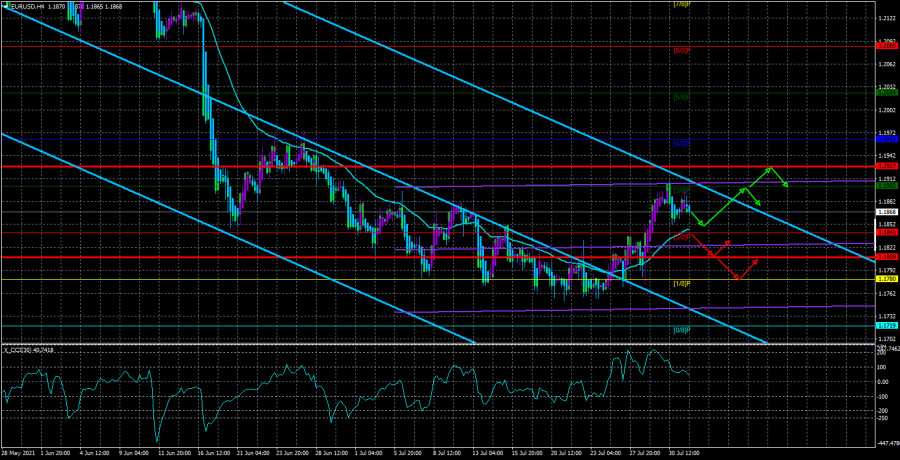 The EUR/USD currency pair did not show anything special on Monday. The volatility during the day again left much to be desired. It is not surprising since the pair has been moving exactly like this in the last few months. It spends three days out of 5 with a volatility of 40-50 points and 1 or 2 days with slightly higher volatility. As a result, during the daily part of each day, the price passes about 40 points, which is extremely difficult to consider as a trend. As a result, there is a situation in which there seems to be a trend movement. There is a trend. However, the movements are so weak that it is extremely difficult to make money on them. If we talk about intraday trading, it is not every day that you can work out the pair's movements at all. If the price crosses an important level, it can go in the right direction for a maximum of 20-30 points, which is usually not enough to count on Taking Profit or working out the next level. If we talk about the 4-hour timeframe, you will need to keep any trade open for at least a few days to make a profit. At this time, the price is located above the moving average line. Thus, a new upward trend has formed. Recall that we have long been expecting the resumption of the upward trend, which has been going on for 1.5 years in total. We still see the "Fed problem" for the dollar as the reason. We believe that the Fed's actions lead to the depreciation of the US currency, both through inflation and through the inflating of the money supply and an increase in supply on the foreign exchange market. In addition, we recall that the global downward trend, which lasted 8-9 years until 2017, is presumably completed for the euro/dollar pair. Therefore, in the long term, traders can still count on the growth of the euro and the fall of the dollar.

What is the significance of the fundamental background for the pair now? It is quite an important question, given that the Fed and the ECB meetings are already behind us, and the pair still does not show any ardent desire to trade more actively. What are the topics that you should pay attention to now? The first thing that comes to mind is "coronavirus." However, the "coronavirus" is a very ambiguous topic, especially now, when vaccination is in full swing in the world when there are already several vaccines, and new ones are constantly being developed, as well as old ones are being improved. It is very difficult to understand whether the markets generally take into account the "coronavirus" factor or not? A couple of weeks ago, the pound clearly showed that the markets can still work out the topic of a pandemic. Recall that the pound fell sharply for several days by 300 points and grew even faster and stronger.

Moreover, these movements perfectly correlated with the growth and decline in the number of cases of coronavirus diseases in the UK. At this time, both in the United States and in the European Union, there are also signs of the beginning of the fourth "wave." At the same time, great fears arise precisely for America and its economy. The problem is that the latest macroeconomic news from overseas has been seriously disappointing. Recall that the Fed is doing everything in its power to continue stimulating the economy so that it recovers as quickly as possible. In particular, the Fed needs maximum employment. To achieve this goal, the Federal Reserve is even ready to sacrifice inflation, which has already jumped to 5.4%. However, at the same time, the indicators of Nonfarm Payrolls and GDP do not always please traders and investors. No later than last week, a report on US GDP for the second quarter was released, which showed an increase of only 6.5% with a forecast of + 8.5%. Over the past six months, the Nonfarm Payrolls report has turned out to be worse than forecasts at least three times. Inflation rose to 5.4% y/y, and the national debt rose to $ 30 trillion. Already this fall, a technical default may be declared in the States. And in recent weeks, at the same time, an increase in the number of cases of the "delta strain" COVID-2019 has begun. In particular, on July 30, almost 200 thousand people fell ill in the United States. Doctors have already dubbed the new wave as the "pandemic of the unvaccinated" because most patients did not receive full vaccination. Thus, business and economic activity in the United States may begin to decline in the coming months. It may start to slow down the recovery. These are all potentially new problems for the American economy and the dollar. We had already paid attention several times to the fact that the dollar did not rise very much, even at a time when major players were actively selling the European currency (according to COT reports). In total, there are already a decent number of factors that speak in favor of continuing the growth of the euro and the fall of the dollar:

From our point of view, all these factors work in favor of the upward movement of the euro/dollar pair, and we continue to expect the pair's quotes to return to the highs of the year near the level of 1.2260 and three-year highs near the level of 1.2350. The lower channel of the linear regression has already begun to turn upward, so the chances of completing the downward trend on the 4-hour timeframe are growing. 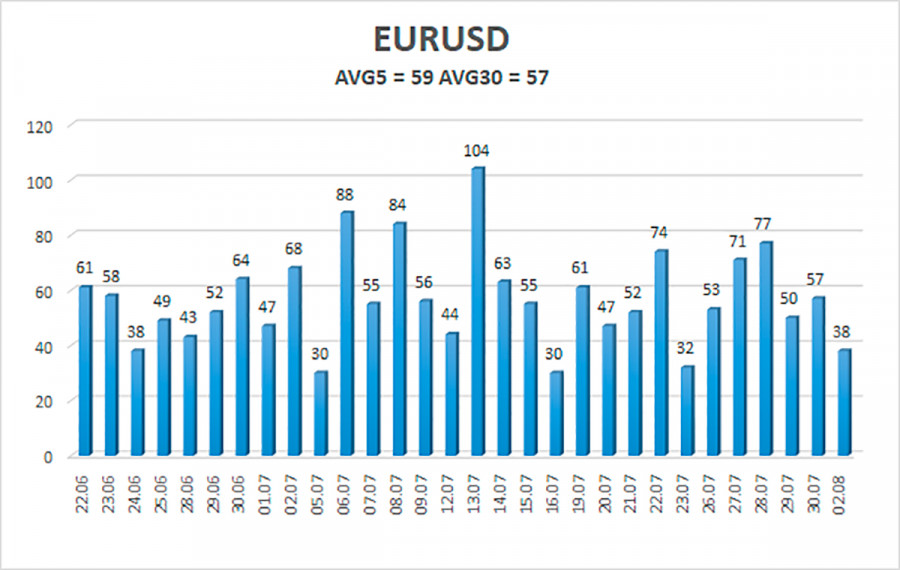 The volatility of the euro/dollar currency pair as of August 3 is 59 points and is characterized as "average." Thus, we expect the pair to move today between the levels of 1.1809 and 1.1927. A reversal of the Heiken Ashi indicator to the top will signal the resumption of the upward movement.

The EUR/USD pair has started a round of downward correction. Thus, today we should consider options for opening new long positions with targets of 1.1902 and 1.1927 after the Heiken Ashi indicator turns up or in the case of a price rebound from the moving average. Sales of the pair will be possible not before the price is fixed back below the moving average line with targets of 1.1809 and 1.1780.