Overview of the EUR/USD pair. August 5. James Bullard: it's time to end the anti-crisis policy and curtail QE! 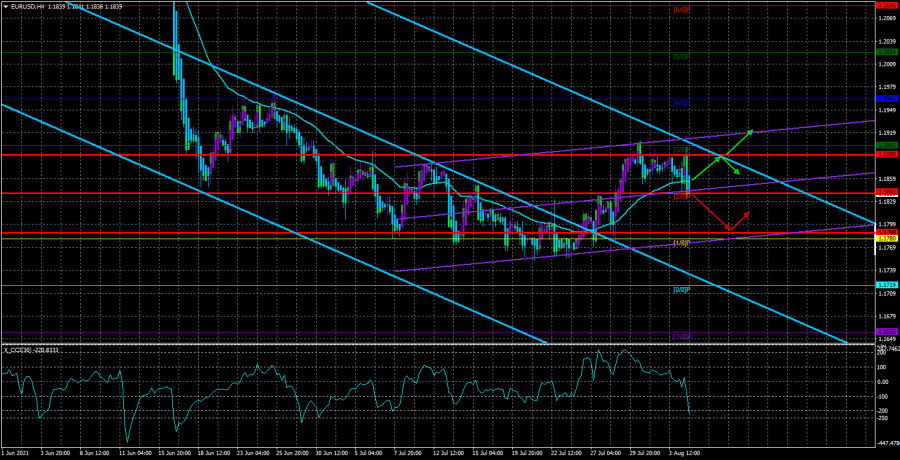 The EUR/USD currency pair continued its weak corrective movement on Wednesday and eventually worked out the moving average line. The volatility was still relatively weak, so the nature of the pair's movement did not change at all. It has been preserved as such for a fairly long period. Recall that we draw traders' attention to the low volatility of the euro/dollar pair and the nearly absent trend movement almost every day. At the same time, it should be clearly understood what a trend is and the absence of a trend. A trend is not necessarily a movement in which the pair is constantly moving in one direction. Such trends are often drawn in textbooks, but in practice, they are very rare. Usually, a trend is a long movement within the current timeframe in the same direction with corrections and pullbacks. Let's say in the case of the euro/dollar pair. It can be a movement of 100 points up, then 50-60 points of correction, and so on. In principle, the pair is quite often traded in this way. But now, when the volatility per day is 40-50 points, it becomes extremely difficult to trade this instrument.

For example, catching a price reversal or a signal on the lower timeframes becomes extremely difficult because even a movement of 100 points can take a whole week. It turns out that intraday trading on the euro/dollar pair is impractical at this time. Recall that this was not always the case. A few months ago, the average volatility of the pair was at least 60 points per day, and signals were formed regularly. Naturally, for a 4-hour timeframe, the stronger the movement, the better. Therefore, in principle, it doesn't even matter which TF you are analyzing at this time. A weak movement complicates the trading process in almost any case, only if you are not working for the long term. Thus, the main conclusion is that the movements are now extremely weak, so it is difficult and problematic to work them out on almost any TF.

Let's go further. Globally, all technical and fundamental factors remain unchanged. Thus, we continue to adhere to our forecasts in global terms, which we announced at the beginning of the year. Namely, the resumption of the global upward trend and the renewal of three-year highs. However, due to the same weak movement, this scenario is also delayed in its implementation. There is absolutely nothing to highlight from the pressing topics in the European Union right now. Therefore, all attention is now focused on the States - the number one supplier of important information. However, unfortunately, the markets do not always work out even this important information.

Therefore, we can only draw the attention of traders to this news and topics, but at the same time, it should be recognized that they have practically no effect on the US currency at this time. For example, what impact does the topic of a possible technical default of the United States have on the dollar exchange rate since the government debt limit was reached? Nothing. What was the market's reaction when it became known that the Democrats and Republicans agreed on an "infrastructure" package worth $ 1 trillion? None at all. Even the Fed's meeting last week did not cause almost any reaction from traders. And this is why we deliberately overlook such important reports as GDP in the US and the EU, which were also ignored. It seems that now 90% of all political, macroeconomic, and fundamental information is ignored by the markets. The same situation was observed in 2020 when it was impossible to penetrate traders with anything. The dollar just got cheaper, and that's it.

One of the Fed members, James Bullard, gave a big interview the other day. From his point of view, the economic regime in the United States is changing, and the central bank will have to adapt to all the changes and shocks that still await the economy in the future. Bullard has repeatedly criticized the Fed's actions for their excessive "softness," but at the moment, he sees excessive volatility in the economy and believes that it needs to be contained. Bullard has repeatedly stated in recent years that the US economy has been mired in low inflation and low growth rates in the last ten years. It is not surprising: after the 2008 crisis, many countries of the world could not achieve the necessary inflation and the necessary rates of economic growth. But now, Bullard noted increased inflation, rising wages, rising production, and a faster recovery than expected. According to Bullard, the Fed can beat itself on the issue of inflation. At the moment, Jerome Powell expects that inflation will begin to slow down by itself, which will allow maintaining a soft monetary policy. However, there will be very serious consequences after any crisis, whatever stimulating measures the government and the central bank would not take. "In the coming quarters, the recovery of the Eurozone economy may be faster than the US," Bullard believes. In light of these factors, the Fed's monetary policy should be more flexible, not more lenient. According to the Fed member, the Fed should already begin to wind down the QE program to fully complete it by the beginning of next year and start preparing for a key rate increase. "After the Fed failed to achieve 2% inflation for ten years, it decided to allow it to grow above 2% to compensate for periods of low price pressure, but at the same time, it risks running into "much more" than it wanted," Bullard believes. Many American economists at the same time point to the "overheating" of the American economy and believe that after the Fed begins to cool the economy, there will be a recession. In other words, when the Fed starts raising rates, it may be a shock to the US economy. In general, most likely, James Bullard is right that monetary policy should be flexible and respond as accurately and quickly as possible to any changes in the economy. 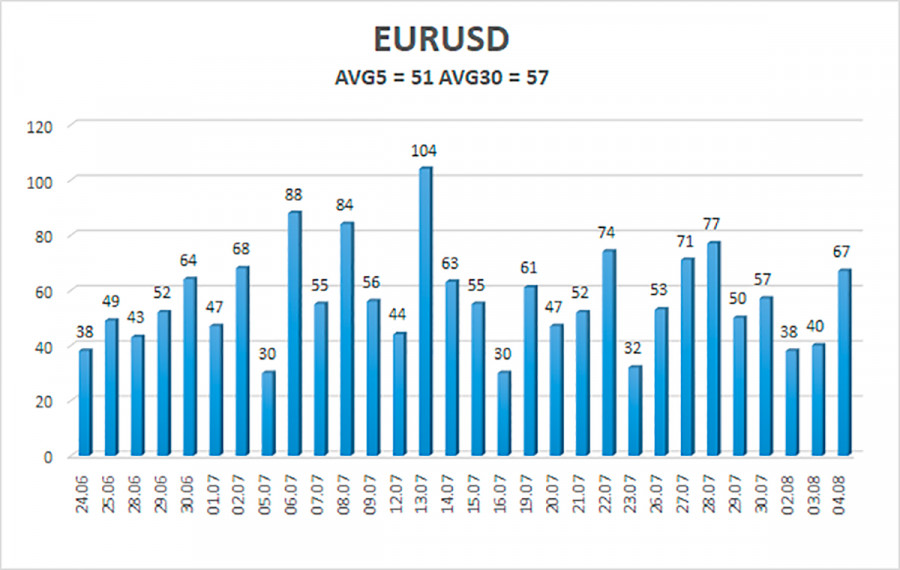 The volatility of the euro/dollar currency pair as of August 5 is 51 points and is characterized as "average." Thus, we expect the pair to move today between the levels of 1.1788 and 1.1890. A reversal of the Heiken Ashi indicator upwards will signal a possible resumption of the upward movement.