Overview of the EUR/USD pair. August 9. Nonfarm Payrolls provide unexpected support to the US dollar. 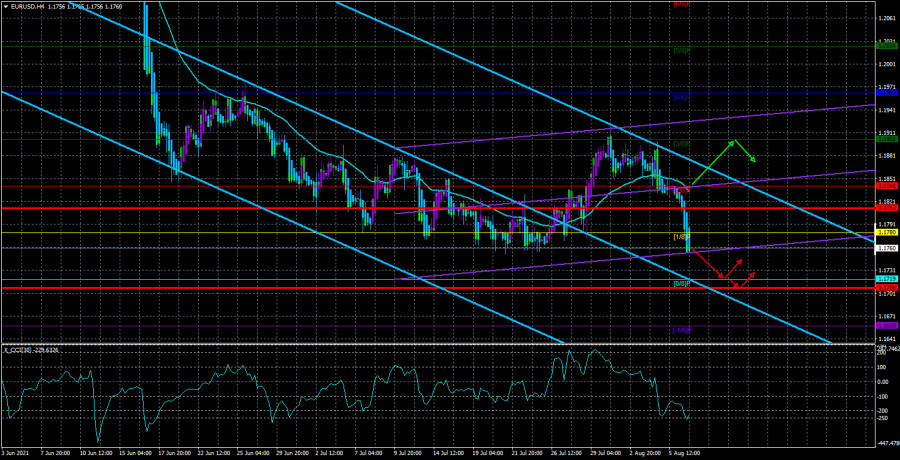 The EUR/USD currency pair fell by 80 points on Friday, and this is a really powerful movement since most of the last days ended with a volatility of 40-50 points. Therefore, we can only be happy for the euro/dollar pair and the traders who worked on it on Friday. But at the same time, it should also be noted that Friday's movement significantly disrupted the current technical picture. It should be noted right away that the forecast for the Nonfarm Payrolls report was about 900 thousand new jobs in July. It was extremely difficult to exceed such a high value, and there were few chances that the number of Nonfarm would be even more significant in reality. Especially after the disastrous ADP report in the same week.

Nevertheless, the number of Nonfarm turned out to be more than 900 thousand in July, so the US currency received strong market support on Friday. The pair's quotes fell to the previous local maximum, although if not for the Nonfarm report, they would most likely have continued to move up. Nevertheless, on Friday, an alternative version of the development of events became more active. Recall that we said earlier that the euro/dollar pair might decline to the level of 1.1700, where the previous round of the global downward correction ended. Thus, it is possible that now the second round of the corrective movement against the global upward trend will resume, and the quotes will still fall to the level of 1.1700, from where we will again expect a resumption of the global upward trend. From our point of view, the global fundamental and technical factors have not changed at all in recent weeks and even months. Therefore, it is still very difficult to expect further strengthening of the US currency. Consequently, we are waiting for the growth of both major currency pairs because there are still upward trends on 24-hour timeframes, and the Fed continues to pour hundreds of billions of dollars into the US economy, provoking an increase in the money supply and inflation.

Now let's look at the macroeconomic statistics in the United States, which was published on Friday, and what it means. It should be clarified that not only the Nonfarm report showed a better value than the forecast. The unemployment rate fell immediately by 0.5% in July from 5.9% to 5.4%, which is also an excellent value. Therefore, these two reports could provoke a fall of the pair and strengthen the US dollar. However, in general, these two reports seem to complement each other. It would be strange to see 1 million jobs created and at the same time an increase in unemployment. Therefore, in principle, both reports reflect the same thing.

The main thing is that the US labor market is recovering and has added almost 2 million jobs outside the agricultural sector in the last two months. Recall that earlier, when calculating the approximate timing of the completion of the Fed's quantitative stimulus program, we relied on the value of +0.5 million Nonfarm per month. With this figure, it would be possible to count on a full recovery of the labor market in 14-15 months. However, if Nonfarm adds a million each month, this period will be reduced to 6-7 months. Consequently, the Fed may seriously think about ending QE in three or four months or even begin to wind it down.

Consequently, the Fed may begin to tighten monetary policy, providing serious support for the US currency in the long term. This moment can become a turning point for the euro/dollar and pound/dollar pairs, as well as for their upward trends. Suppose in a few months the Fed stops pouring hundreds of billions of dollars into the American economy. In that case, the growth of inflation will stop, the growth of the money supply will stop, the economy will be close to full recovery, and then it will be possible to start raising the key rate. Thus, such a set of factors will already be in the hands of the US currency. Of course, it is still far from that Nonfarm will grow by a million every month. And, most likely, they will not. Therefore, it is still too early to open champagne on this occasion and buy US dollars with all the money. Nevertheless, such a scenario is possible, and it should be taken into account. However, for the time being, we are still inclined to the fact that the US dollar will resume its depreciation against European currencies.

Now let's briefly go through the new week. There will be much fewer macroeconomic publications and fundamental events on it. There will be only one really important report for two in the United States and the European Union. It is the US inflation report for July. According to experts' forecasts, the consumer price index in July may remain in the range of 5.3-5.4% y/y. It is difficult to say whether the US dollar will receive support at this value. From our point of view, it is unlikely. However, it should be understood that inflation is the most ambiguous macroeconomic report. For example, if inflation is below 2% and is growing, this is considered a good phenomenon because the Fed sets itself to raise inflation. If the Fed's target level has long been left behind, and inflation can continue to accelerate, setting 25-year anti-records, then this is probably already a negative phenomenon. Thus, we believe that the US dollar will not show growth at almost any value of the consumer price index for July. Moreover, the Fed has made it clear to the markets that it will not stop the growth of inflation with the help of monetary instruments, focusing its full attention on the labor market. All other week publications are considered secondary, so they are unlikely to cause some reaction from the markets. 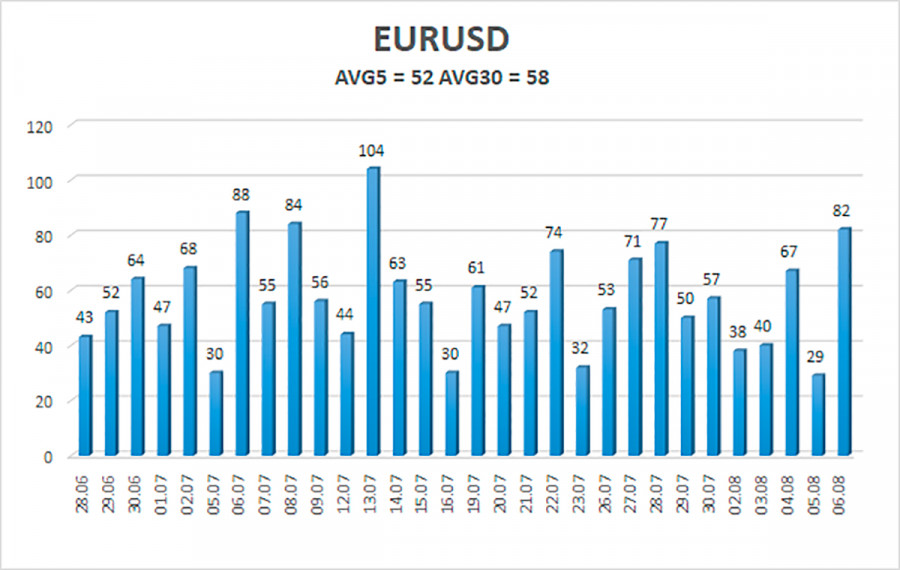 The volatility of the euro/dollar currency pair as of August 9 is 52 points and is characterized as "average." Thus, we expect the pair to move today between the levels of 1.1708 and 1.1812. A reversal of the Heiken Ashi indicator to the top will signal a round of upward correction.

The EUR USD pair unexpectedly started a strong downward movement. Thus, today you should stay in short positions with targets of 1.1719 and 1.1708 until the Heiken Ashi indicator turns up. Purchases of the pair will be possible if the pair is fixed above the moving average line with targets of 1.1902 and 1.1963 before the Heiken Ashi indicator turns down.