Overview of the EUR/USD pair on August 6. 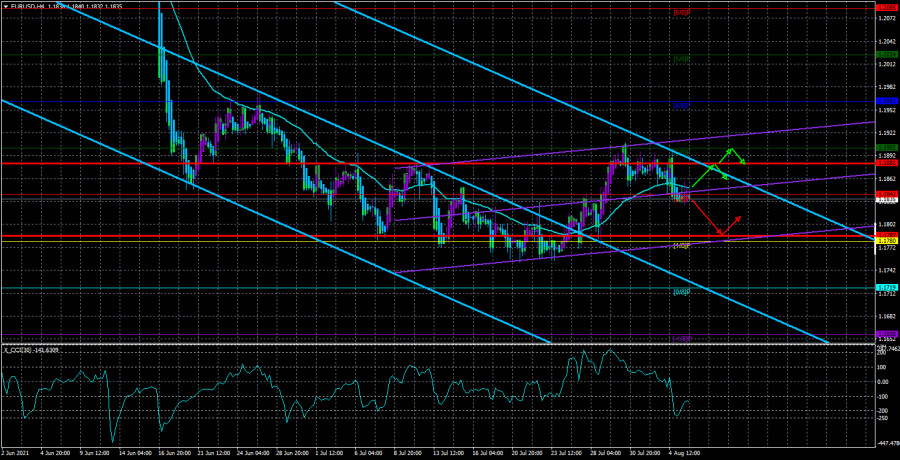 The EUR/USD currency pair on Thursday could not quickly recover from the fall on Wednesday, which was triggered by a strong ISM business activity index. Thus, the pair's quotes were fixed below the moving average line, so the trend again changed to a downward one. However, at the same time, we are forced to talk again about the fact that the movements remain quite weak and passing in a very narrow range. By and large, most of the trading days of the last 30 ended with a volatility of fewer than 60 points. And trading in the last month and a half takes place between the Murray level "3/8" - 1.1902 and 1.1760. The most interesting thing is that even though the pair has been sitting for a month and a half in a 140-point side channel, the movement cannot be called a classic flat. In the first half of this period, the price tried to continue the downward trend and steadily declined to the level of 1.1760. Therefore, I tried to overcome it for about two weeks. Then it bounced up to the level of 1.1902. Thus, by and large, in the last month and a half, we have witnessed a systematic decline, and therefore about the same increase in the euro/dollar pair. But what can we do if, over the past month and a half, the total volatility was 140 points? From the minimum to the maximum of the one-and-a-half-month period, the pair passed only 140 points. That's all you need to know about volatility right now. That is why the trading has been very sluggish in recent months. It is especially noticeable on the most junior timeframes, although standing in one place is visible on the older ones. Thus, the pair's relatively active movements on Wednesday were even somewhat unexpected. Mainly because the markets reacted to almost all the reports and events of this day. They had nothing to react to yesterday, so Thursday's volatility was the notorious "less than 40 points".

Meanwhile, there was a kind of panic or emotional explosion among traders and analysts yesterday. The fact is that Fed member Richard Clarida said that in 2023 the Fed might raise the key rate, and at the end of 2021 - announce the curtailment of the quantitative stimulus program. We have regularly mentioned in our articles that most of the monetary committee members of the US regulator agree that the rate will be raised in 2023, and several times. Thus, what Richard Clarida said cannot even be called news. The same applies to his words regarding the quantitative easing program. The Fed will start talking about its possible completion by the end of the year is now evident to everyone. The labor market in the United States is only recovering, and it is still very far from pre-crisis levels. According to Jerome Powell, the current number of workers in the United States is 7 million less than the pre-pandemic values. Thus, it is easy to calculate that with an increase of 0.5 million employees per month, it will take 14 months to return to pre-crisis levels. We focus on the Nonfarm Payrolls indicator and note that not every month its value is 0.5 million or more. Thus, it may take even more than 14 months for a full recovery. And all this time, the economy will need to be stimulated. Then what kind of curtailment of the QE program can we talk about now? Objectively speaking, it will be too early to talk about its completion even at the end of this year. However, by that time, it will still be possible to draw intermediate conclusions about the overall recovery of the labor market. These results will give grounds to argue about the end of QE. Or, by that time, inflation in the United States will rise to completely indecent values, so the Fed will have no other choice but to tighten monetary policy to contain the price increase somehow.

Recall that the inflation rate is already at its highest in 13 years. If it reaches 5.6%, it will be a 25-year record. Thus, in almost any case, it makes no sense to talk about curtailing the QE program earlier than the end of this year. And the whole statement of Richard Clarida is not news for the foreign exchange market. We assume that the foreign exchange market could react with purchases of the US currency this week. The fact is that the ISM index and Richard Clarida's speech coincided on Wednesday, so it is impossible to say with absolute probability what exactly caused the dollar to strengthen by 50 points within one hour. It is quite possible that both of these events affected the demand for the US currency. However, from our point of view, Clarida's words are not new, and in any case, the dollar's growth was only 50 points, and it was not continued on Thursday.

As a result, we can say the following: the technical picture of the pair does not change at all. The macroeconomic background from time to time has a local impact on the pair's movement, but it is extremely weak. Thus, the pair spends most of the time in a very narrow side channel. We believe that the fall of the US currency will resume in the long term, and the pair will return sooner or later to its three-year highs, but so far, the markets refuse to trade the pair actively. 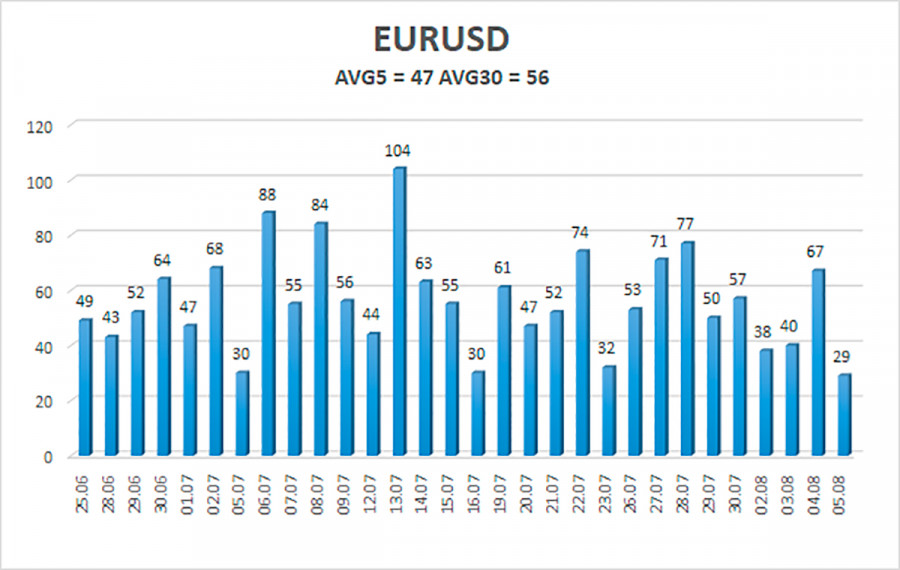 The volatility of the euro/dollar currency pair as of August 6 is 47 points and is characterized as "average." Thus, we expect the pair to move today between the levels of 1.1787 and 1.1881. A reversal of the Heiken Ashi indicator upwards will signal a possible resumption of the upward movement.

The EUR/USD pair has started a new round of downward correction. Thus, today we should consider opening new long positions with targets of 1.1881 and 1.1916 if the price is fixed back above the moving average. Sales of the pair are possible now, as the pair is fixed below the moving average line with targets of 1.1787 and 1.1780, but low volatility should be considered.