Overview of the EUR/USD pair. September 1. The announcement of the beginning of the curtailment of the QE program has already 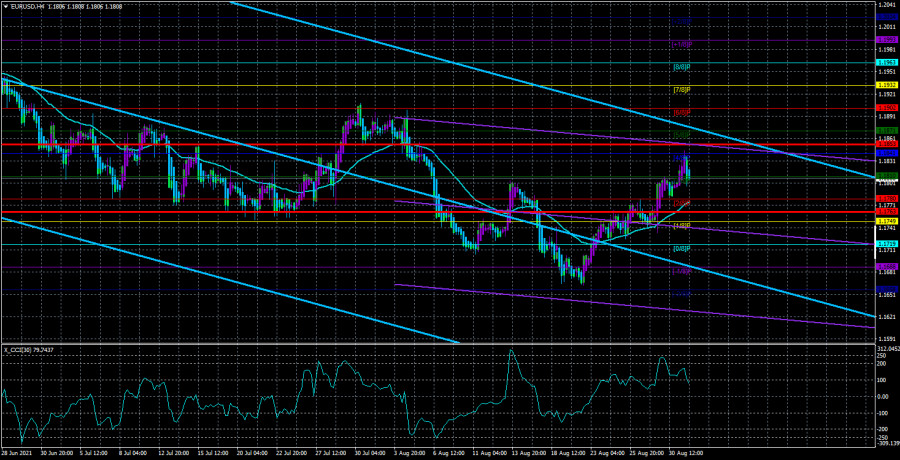 The EUR/USD currency pair was trading very calmly again, but at least with a movement, and did not stand in one place all day, as on Monday. A specific role in the strengthening of the European currency on August 31 was played by the report on European inflation for August, which recorded an acceleration from 2.2% y/y immediately to 3.0% yo/y. Thus, the European currency received market support, although inflation is a negative factor for the currency. However, much more complex mechanisms are already working here. For example, inflation growth in the United States increases the likelihood of tightening monetary policy, which is already a positive factor for the currency. In addition, the markets may try to work ahead of the curve, which violates the reflection of certain factors on the charts. However, we will analyze this point a little later. So far, it should be said that the technical picture has not changed at all during Tuesday. The euro/dollar pair is still above the moving average line, and both linear regression channels are directed down. Thus, at the moment, we are witnessing how the downward trend is changing to an upward trend. At the same time, we remind you that we have long predicted an upward reversal and the beginning of a new upward trend on the 4-hour chart, which will become part of the global upward trend on the 24-hour chart. At the moment, everything is going according to plan, and we expect the quotes to grow at least to the level of 1.4240. It should also be noted that all the fundamental factors remain the same and unchanged. The Fed continues to pour hundreds of billions of dollars into its economy, so the US dollar remains at risk in almost any case. We also pay attention to the COT reports, which indicated a strong reduction in the net position of non-commercial traders in the last two months, which usually means the end of the trend. However, the euro currency only corrected down by 500-600 points against the global upward trend. Therefore, an upward movement still has much more chances.

Now let's look at such a concept as "playing ahead of the curve" and try to understand whether it has a place to be at this time. The essence of this factor is simple. When an event is frankly brewing (as the Fed's announcement of the curtailment of the QE program is now), the markets can work it out ahead of time. The Fed has not curtailed anything yet. Monetary policy remains the same, but the dollar is getting more expensive, as the markets expect the regulator to start curtailing QE in the near future. As a result, the pair has already risen quite seriously on these expectations alone, which have not even been confirmed by anything yet. Recall that the whole story with the curtailment of QE began a couple of months ago at the Fed meeting before last when it was Jerome Powell who said for the first time that the regulator "may start discussing the curtailment of QE in the near future." Then the pair fell by 250 points. And in the next few months, it continued to tend to fall (that is, to the growth of the US dollar). Although during these two months, the Fed representatives only continued to expect that a tightening of monetary policy could be announced in the near future, and no "hawkish" decisions were made and were not announced. Thus, the fall of the euro/dollar pair to the 17th level may be a market reaction to the yet-to-be-announced reduction in QE. Therefore, when the Fed finally matures and announces the beginning of a reduction in monetary injections into the economy, the US dollar may no longer receive any market support since it has already used it earlier. It is only a guess. But we continue to draw traders' attention to the fact that the QE program has not yet been completed, and it will not end in one day. Most likely, the whole process will take at least a year and maybe more time. The volume of monetary injections into the US economy will decrease gradually, which will continue in any case. Thus, the US currency still has an excellent chance of resuming the decline.

In the near future, we expect growth to the level of 1.1900, which is the previous local maximum. We draw your attention once again to the weak volatility of the euro/dollar pair. 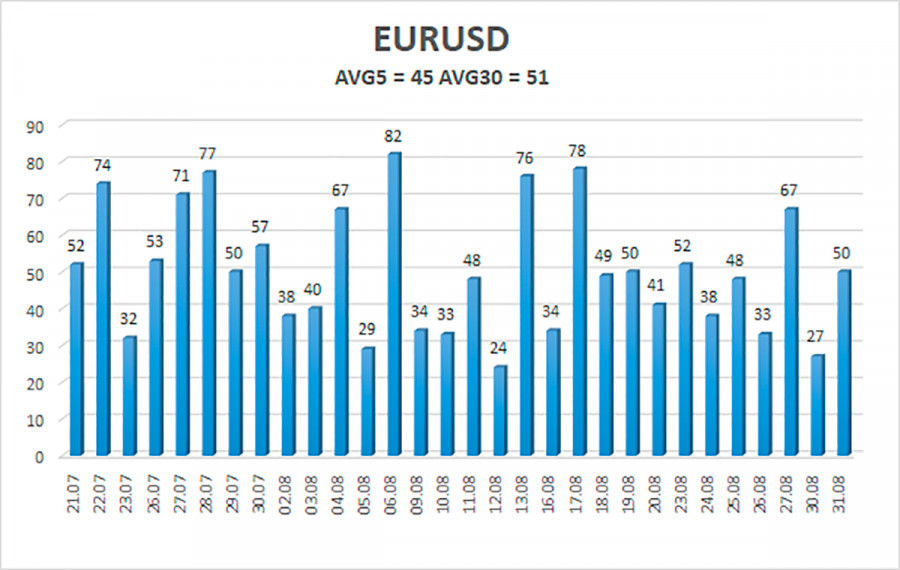 The volatility of the euro/dollar currency pair as of September 1 is 45 points and is characterized as "low." Thus, we expect the pair to move today between the levels of 1.1763 and 1.1853. The upward reversal of the Heiken Ashi indicator signals the resumption of the upward movement.

The EUR/USD pair continues its weak upward movement. Thus, today you should stay in long positions (or open new ones) with targets of 1.1841 and 1.1853 after the Heiken Ashi indicator turns up. Sales of the pair will be possible if the pair is fixed back below the moving average line with targets of 1.1749 and 1.1719, and they should be kept open until the Heiken Ashi indicator turns up.

Interesting? Write a comment below.
 Overview of the EUR/USD pair. September 1. The announcement of the beginning of the curtailment of the QE program has already
Forward 
Backward 