Overview of the GBP/USD pair. August 13. British scientists: collective immunity against the "coronavirus" is a myth. 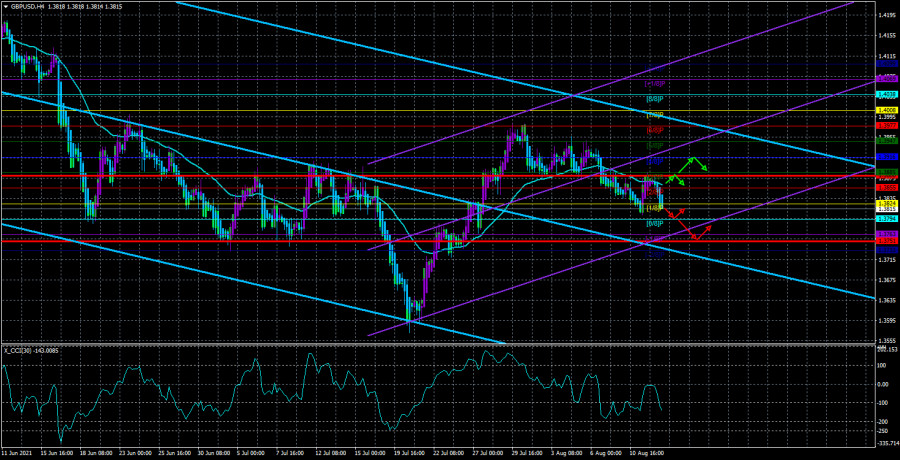 The British pound has been moving somewhat erratically all this week. Although in general, over the four trading days, the pound/dollar pair first showed a decrease of 65 points and then an increase of 75 points. It has traveled a minimal distance, and its volatility also leaves much to be desired. Thus, the pound is also standing in one place at this time. However, we have already explained the difference between the euro/dollar and pound/dollar pairs. If we assume that they have been moving under the influence of the same factors in the last year and a half (and this is true, since the trends almost completely coincide), then at this time, the factors influencing the exchange rate formation of both are the same. However, the pound fell to the minimum of the first round (the level of 1.3669) and even slightly lower. After that, it has already built a round of upward movement, against which it is now being corrected. The euro has only recently crawled to its previous low with great difficulty and is just thinking about what to do next. Therefore, there is either an uncorrelation of the two main currency pairs or an advance of the schedule of one of them. We are inclined to the second option. Therefore, we are waiting for the euro/dollar pair to turn up in the near future and come out of the "coma." But the pound/dollar pair at this time will have to wait for the euro/dollar pair for some time. The fundamental background for the pound/dollar pair has not changed at all recently. Thus, there is no reason to assume that the pound is moving differently from the euro/dollar pair now due to some quite precise reasons. By and large, nothing interesting is happening in the UK right now. There is no news on the topic of Brexit. Recently, the Bank of England held a meeting, which also did not give enough information to the markets.

Meanwhile, the fourth "wave" of the "coronavirus" in the UK continues. A couple of weeks ago, the number of daily recorded cases of the disease in the UK halved against the peak values. Thus, many thought that the wave was ending. However, as practice shows, 25-30 thousand new cases of infection with the virus continue to be recorded daily in the UK. And this is although 75% of the adult population of the UK has already received both vaccinations. Many experts already have questions. If people continue to get infected and end up in hospitals with such a high level of vaccination of the population, then maybe the existing vaccines are not so effective? Various studies and trials show that each of the most well-known vaccines today (Pfizer, Moderna, Johnson & Johnson) has an effect of more than 80%. However, the fact remains that the current levels of morbidity in the UK are comparable and even exceed the peak levels of the second "wave," which was observed last autumn. Just think about it: now, when 75% of UK residents have been fully vaccinated, more people are infected than last autumn, when there were no vaccines yet. Such information raises several new questions. Already, scientists are called upon to answer, how long will each vaccine last? How often will I need to get new vaccinations? Do I need a third vaccination for people with weakened immunity? Will humanity succeed in achieving collective immunity? And, unfortunately, the answers to some of these questions are already very frustrating. First, according to the assurance of the chief epidemiologist of the United States, Anthony Fauci, people with weakened immunity need a third ("booster") vaccination. Recently, it was reported that all existing vaccines begin to weaken about a year after their introduction. And just yesterday, the director of the Oxford Group for the development of the AstraZeneca vaccine, Professor Andrew Pollard, said that the current delta strain makes it impossible to achieve collective immunity against the coronavirus.

The professor said that the existing vaccines against the "coronavirus" did not stop its spread. For several weeks in a row, new "outbreaks" and "waves" of the epidemic have been observed in several countries worldwide. At the same time, we are talking about underdeveloped or developing countries that are experiencing a shortage of vaccines and countries such as the United States or the United Kingdom. Thus, Sir Andrew Pollard concludes that it is impossible to achieve collective immunity under the current circumstances. "The problem with the COVID virus is that it is not measles. If 95% of people are vaccinated against measles, the virus cannot spread. The delta strain continues to infect even those people who have already been vaccinated," Pollard said. The professor also noted that vaccines are necessary and effective in any case since, in some cases, they prevent complications caused by the virus and reduce the mortality rate. In general, the news for the whole world is not the most optimistic. The economic recovery continues, but no one knows what other strains humanity will face and what consequences they will entail.

The pound/dollar pair, meanwhile, is located below the moving average line. Thus, the downward trend is now maintained. And we have already talked about weak volatility, so there is nothing to add here. While the price is below the moving average, short positions should be considered. However, we remind you that the fundamental background remains in favor of the British currency, and we expect the resumption of the upward trend. 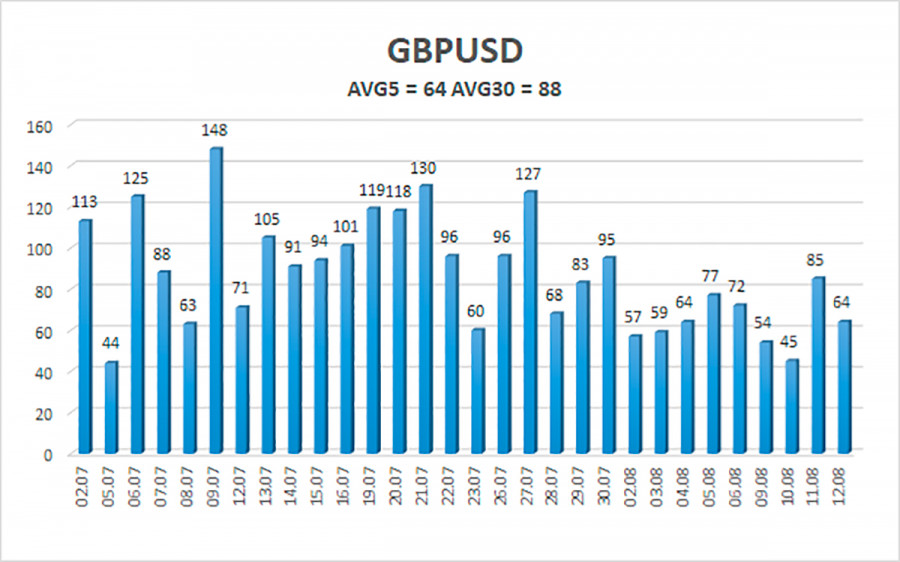 The average volatility of the GBP/USD pair is currently 64 points per day. For the pound/dollar pair, this value is "average." On Friday, August 13, we expect movement inside the channel, limited by the levels of 1.3751 and 1.3880. A reversal of the Heiken Ashi indicator upwards will signal a new round of upward correction.

The GBP/USD pair continues to be located below the moving average on the 4-hour timeframe. Thus, today, it is necessary to remain in the pair's sales with the targets of 1.3794 and 1.3751 until the Heiken Ashi indicator turns upwards. Buy orders should be considered if the price is fixed back above the moving average line with targets of 1.3885 and 1.3916, and keep them open until the Heiken Ashi turns down.

Interesting? Write a comment below.
 Overview of the GBP/USD pair. August 13. British scientists: collective immunity against the "coronavirus" is a myth.
Forward 
Backward 