Overview of the GBP/USD pair. August 19. Everyone has forgotten about the UK and its global problems. What can we expect 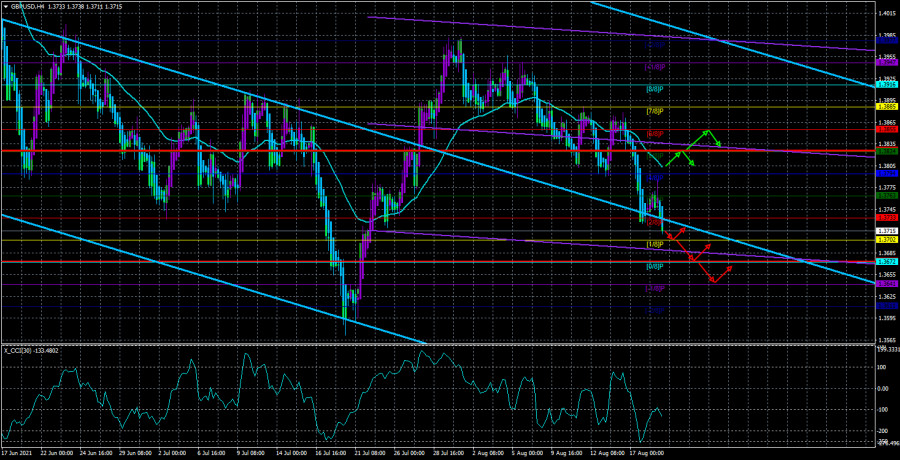 On Wednesday, the British pound paired with the US dollar also began a round of upward correction against the current downward trend. Recall that the price continues to be located below the moving average line, although it has attempted to gain a foothold above it twice recently. But the bears kept the initiative in their hands every time, so the pound continued to decline. However, the overall technical picture on the 4-hour timeframe and the global technical picture on the 24-hour timeframe indicate that the pound should resume moving north. Recall that a whole bunch of various fundamental and technical factors speak in favor of this scenario. Starting from the fact that the pair has twice adjusted to the area of the 36th level against the global upward trend, ending with the fact that the Fed continues to pump the American economy with hundreds of billions of dollars, which provokes an increase in inflation and the depreciation of the US currency, respectively.

It should be noted that the correction against the global upward trend has been going on for six months. Of course, the trend itself has lasted for more than a year and a half. However, the correction this time has dragged on. At the same time, it is impossible to interpret the entire movement after February 24 in any other way than a correction. It simply does not pull on a full-fledged downward trend. Thus, we continue to wait for the markets to turn against the US currency again, and the euro and the pound will begin to show growth again.

In previous articles, we have already said that only a sharp increase in the "hawkish" mood of the Fed and the early completion of the quantitative stimulus program can save the US currency from a new fall. Theoretically, both the first and the second can happen in the near future. However, in any case, the QE program will be fully completed no earlier than in a year or even much later. After all, the Fed will wind it down gradually, and not in one day or week. Thus, in any case, the American economy will be pumped up by hundreds of billions of dollars by the end of 2021. At the same time, there is almost a complete news calm in the UK. The UK Parliament has gone on vacation, so almost no information has been received from the government and personally from Boris Johnson recently. The latest reports from the Prime Minister concerned that 75% of the country's population has already been fully vaccinated. The problem of Afghanistan is very serious for the whole world, and Johnson suggests that the G-7 countries hold an emergency meeting to discuss it. That's all.

It is unclear what relations the EU and Britain will be in the coming years. Even after the completion of Brexit, they cannot agree on the terms, particularly on the "Northern Ireland protocol." It is unclear what future awaits Scotland with the United Kingdom, which wants to hold an independence referendum and secede from England by 2023. It is unclear when a new conflict will break out between unionists and supporters of separation from Great Britain on the island of Ireland. It is unclear how the border between Ireland and the rest of the UK will function. In general, many "incomprehensible" things may create many new problems for Britain in the future. We also recall that the British economy is recovering quite slowly after the crisis. The Bank of England is also pouring large enough money into the economy to stimulate it. In addition, several state programs to combat unemployment and preserve jobs will cease to operate in September. Thus, it is possible that in the autumn, the unemployment rate will jump in the UK, which may cause a new round of slowing down the economic recovery. Also, the Bank of England is currently thinking about reducing its quantitative stimulus program. If it is completed in the coming months, it can provide strong support for the pound. However, the Fed may also announce the curtailment of QE in the coming months. Therefore, from our point of view, neither the pound nor the dollar has an unambiguous advantage now. But since the US currency has not started forming a new downward trend over the past six months, we continue to lean towards the option with new growth of the pound/dollar pair. 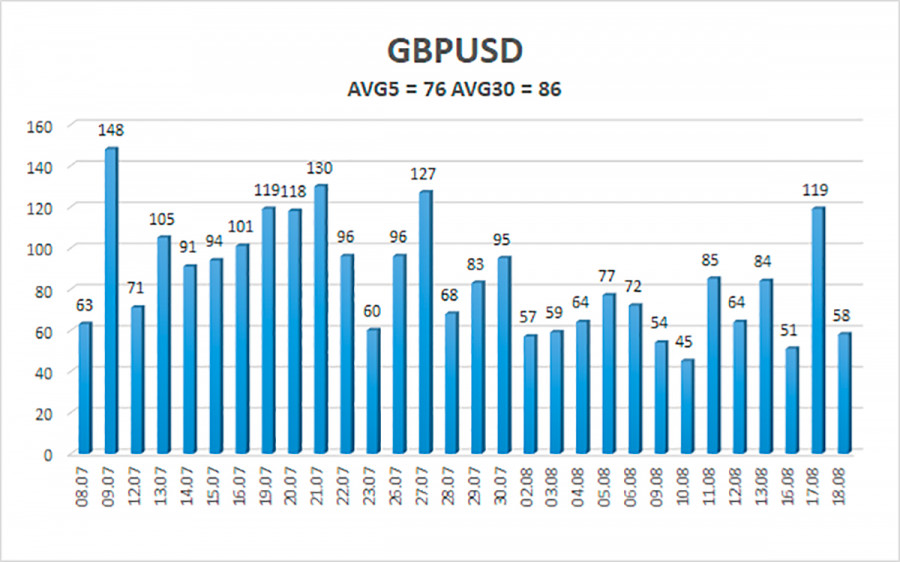 The average volatility of the GBP/USD pair is currently 76 points per day. For the pound/dollar pair, this value is "average." On Thursday, August 19, we expect movement inside the channel, limited by the levels of 1.3673 and 1.3825. A reversal of the Heiken Ashi indicator upwards will signal a new round of upward correction.

The GBP/USD pair continues to be located below the moving average on the 4-hour timeframe. Thus, today, it is necessary to remain in the pair's sales with the targets of 1.3702 and 1.3672 until the Heiken Ashi indicator turns upwards. Buy orders should be considered if the price is fixed back above the moving average line with targets of 1.3824 and 1.3855 and keep them open until the Heiken Ashi turns down.

Interesting? Write a comment below.
 Overview of the GBP/USD pair. August 19. Everyone has forgotten about the UK and its global problems. What can we expect
Forward 
Backward 