Overview of the GBP/USD pair. August 2. The Bank of England is unlikely to surprise traders with anything. All attention 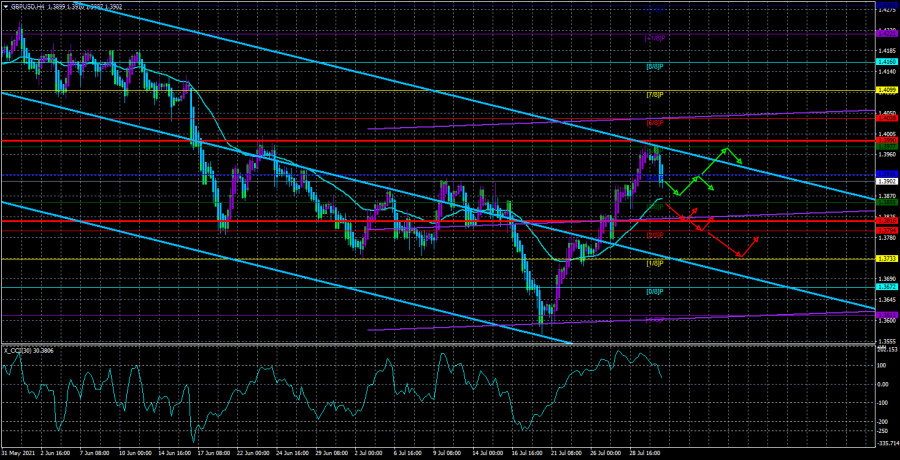 The British pound also began to adjust against the US currency on Friday, as did the euro. The only difference is that the pound went up about 400 points before adjusting, and the euro currency – 150. Thus, the British currency has strengthened very seriously in the last couple of weeks, and we can only try to figure out why this happened and what awaits the pair next. By and large, nothing unexpected happened. In recent months, we have repeatedly said that we expect a resumption of the global upward trend. Now, of course, it is still impossible to say with certainty that the upward trend has resumed.

Nevertheless, the chances of this are extremely high. Recall that the pair fell to the area of 1.3600-1.3666, which we have repeatedly called the target. As for the fundamental reasons, there were practically none. We mean that last week, and the week before that, there were not many macroeconomic and fundamental events that could provoke an almost recoilless growth of the pound by 400 points. However, this does not mean that there were no reasons for such an increase. As the latest COT reports showed, the big players did nothing but reduce long positions on the pound and increase short ones. However, the pound has been growing for two weeks, so now, new purchases of the British currency by major players would be more suitable. But their net position has fallen below zero, so their mood is already "bearish." The "bearish" mood of traders and the pound is growing. We have already talked about this discrepancy many times. From our point of view, this paradoxical situation is explained by the fact that hundreds of billions of dollars continue to pour into the American economy from the Fed, which continues to inflate the money supply and devalue the dollar. Therefore, this situation arises, in which the largest and most important market players sell the pound, and it becomes more expensive. From our point of view, the US currency is depreciating just faster than the pound, which is indirectly confirmed by the inflation data in the UK and the US.

This week, the most important data on the labor market will be published in the US, and a meeting of the Bank of England will be held in the UK. All these events are extremely important. Nothing supernatural can be expected from the Bank of England now. After the Fed made it clear that there is no question of any tightening of monetary policy now, it is unlikely that any traders will seriously expect that the Bank of England will talk about curtailing the QE program or raising rates. Although formally, it is the Bank of England that is a little closer to completing the stimulus program than the Fed since one of the nine members of the monetary committee has already voted for reducing the QE program for two meetings in a row. We will find out how it will be this time on Thursday. It is even the main intrigue of this meeting, which promises to be as passable as possible, like the last meeting of the Fed. So far, even the speech of the head of the Bank of England, Andrew Bailey, does not appear in the news calendars. Thus, everything can end with a regular report on monetary policy, and that's it. Since the regulator currently has no grounds for reducing the QE program, the pound is unlikely to wait for support from the BA. However, does he even need this support and the entire fundamental background? Over the past few weeks, the pound/dollar pair has been trading quite volatile, regularly showing trends although no reports and figures have been received from the UK. Thus, the pound can continue to trade quite actively without a BA meeting.

It should also be noted that the general fundamental background from the UK is now as simple as possible. If a couple of weeks ago there was threatening data on the "fourth wave" of the pandemic, now the epidemiological situation has improved. However, this is the UK, and there are by definition plenty of problems there now. We have already talked about the impending political crisis, as more criticism is pouring into Boris Johnson every day. London also conflicts with Brussels over the "Northern Ireland Protocol," regularly violating its provisions and demanding its complete revision. It is not the kind and scale of the problem to causes a decline in the British currency. Most likely, the pound will continue to react more to the actions of the Fed and the ratio of British and American inflation. Recall that in the United States, the consumer price index is at least twice as high as in Britain. By the way, several secondary reports, such as business activity indices, will also be published in the UK this week. However, there is little chance that the markets will notice them at all.

From a technical point of view, the pair is now being adjusted to move. A rebound from this moving average may trigger the resumption of the upward movement. The lower linear regression channel has already started to turn up, and the last downward trend on the 4-hour timeframe ended where we expected. Therefore, in global terms, no one prevents the pair from resuming the global upward trend now. 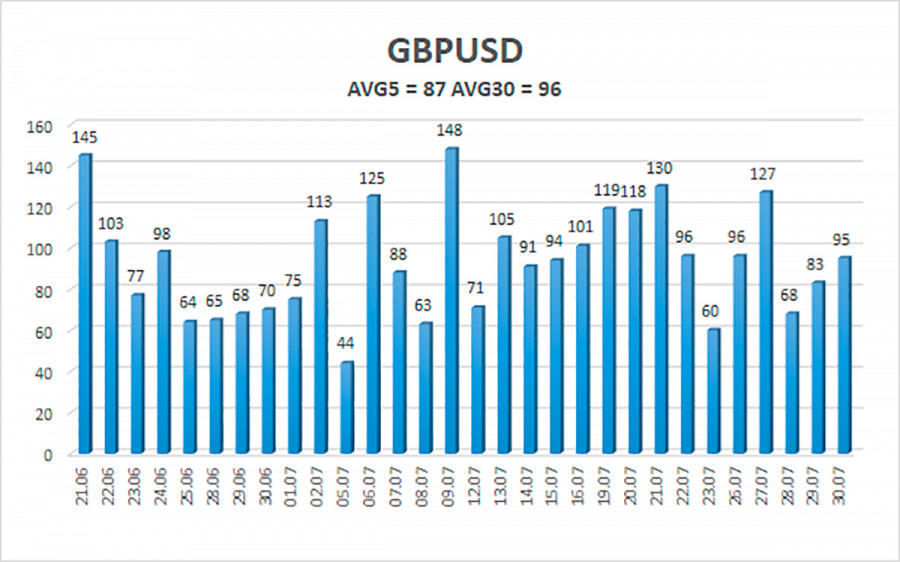 The average volatility of the GBP/USD pair is currently 87 points per day. For the pound/dollar pair, this value is "average." On Monday, August 2, we expect movement inside the channel, limited by the levels of 1.3816 and 1.3990. A reversal of the Heiken Ashi indicator back to the top will signal the resumption of the upward movement.

Interesting? Write a comment below.
 Overview of the GBP/USD pair. August 2. The Bank of England is unlikely to surprise traders with anything. All attention
Forward 
Backward 