Overview of the GBP/USD pair. August 20. Boris Johnson came under a barrage of criticism in Parliament over the withdrawal

The British pound, paired with the US dollar, continued to fall for most of the day on Thursday. While the European currency at least tried to adjust a little, the pound was falling. At the same time, it is quite difficult to say the true reasons for this fall in the British currency? Recall that the pound made an impressive leap up by 400 points in 7 working days three weeks ago. Then it seemed that the downward trend on the 4-hour timeframe was broken, as the bulls managed to go beyond the previous local highs. However, a rebound followed from the level of 1.3978, as on June 22, which provoked a new fall within the downward trend on the 4-hour timeframe, which is still interpreted as a global correction against the global upward trend on the 24-hour TF. It follows that until the update of its previous local minimum on July 20, the chances of ending the current downward trend are still preserved. However, they are melting just before our eyes, since out of 400 points gained three weeks ago, the pound has already lost 320. However, it took three times longer to do this, which still makes us think about what reasons the dollar's growth can be in general? Nothing else comes to mind, except the traders' belief that the Fed will become the first central bank out of the three central banks we are interested in, which will curtail the quantitative stimulus program and raise the rate. However, whatever the current fundamental background, it should be noted that both channels of linear regression are still directed downwards. The moving average line is directed downwards. Therefore, all trend indicators are now signaling a downward movement.

At this time, Boris Johnson, who followed the example of Joe Biden and ordered the withdrawal of British troops from Afghanistan, came under a barrage of criticism in the British Parliament. It turned out that quite a lot of veterans of the Afghan campaign gathered in the House of Commons, who called the current government's decision "shameful, cowardly and humiliating." During the last session of Parliament, Johnson was constantly interrupted and prevented from making a speech. When this or that veteran of Afghanistan spoke, there was dead silence in the hall. Former Prime Minister Theresa May said that Johnson's decision would have serious consequences. China and Russia will "conclude" because of the withdrawal of American and British troops from Afghanistan. According to May, Britain should not have followed the example of America and should have assembled a new alliance to protect Afghanistan from the Taliban. "What is the point of talking about NATO if we all depend on Washington's decisions?" asked Theresa May. However, according to Johnson himself, the UK has achieved its goal in Afghanistan, and without the support of American troops, it would not have been able to keep the country under its control. Johnson said that the country was cleared of militants of the Al-Qaeda terrorist group, and Afghans had the opportunity to receive a good education and protection of women's rights in the last 20 years. Johnson also said that his administration had approved a program for resettling refugees from Afghanistan. Over the next five years, Britain will accept about 20 thousand immigrants who want to escape the Sharia regime and are being persecuted by the Taliban.

It is not the first time Boris Johnson has come under criticism from the British Parliament and opposition forces. And the pound, meanwhile, continues to fall due to a new political crisis in Britain. At the same time, the pound itself is getting cheaper, and the US dollar is getting more expensive. We have already listed the reasons for strengthening the US currency in the article on the euro/dollar. Therefore, the general conclusions at the moment are as follows: (1) the downward trend continues; (2) the pound is getting cheaper, and the dollar is getting more expensive; (3) until the mark of 1.3570 is overcome, the chances of ending the downward trend remain, but they melt with each new advance of the pair down. Therefore, it is advisable to consider buying the pair not earlier than fixing the price above the moving average line and turning up at least one linear regression channel. 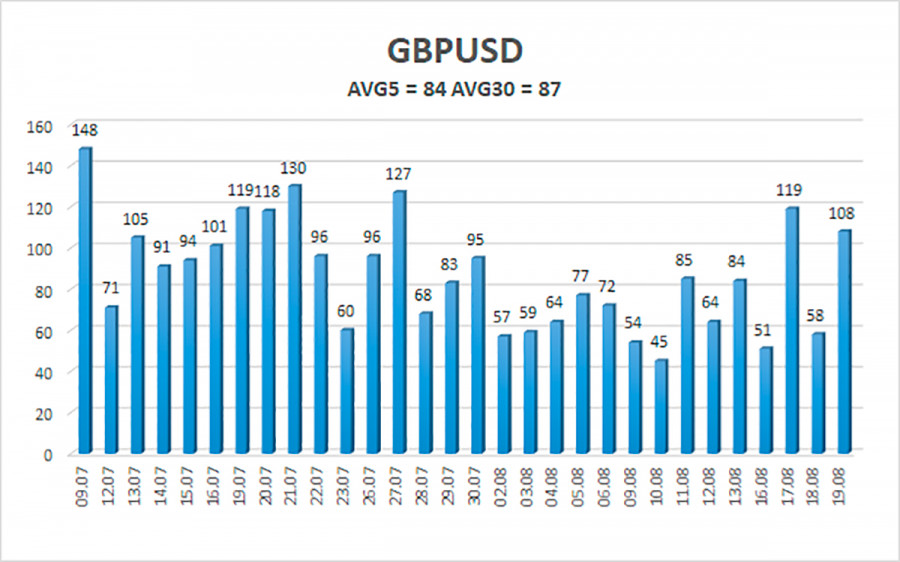 The average volatility of the GBP/USD pair is currently 76 points per day. For the pound/dollar pair, this value is "average." On Friday, August 20, we expect movement inside the channel, limited by the levels of 1.3565 and 1.3733. The upward reversal of the Heiken Ashi indicator signals a round of upward correction.

The GBP/USD pair on the 4-hour timeframe continues to be located below the moving average and the downward movement, which is increasing. Thus, today, it is necessary to remain in the pair's sales with the targets of 1.3611 and 1.3565 until the Heiken Ashi indicator turns upwards. Buy orders should be considered if the price is fixed back above the moving average line with targets of 1.3824 and 1.3855 and keep them open until the Heiken Ashi turns down.

Interesting? Write a comment below.
 Overview of the GBP/USD pair. August 20. Boris Johnson came under a barrage of criticism in Parliament over the withdrawal
Forward 
Backward 