Overview of the GBP/USD pair. August 24. The British pound is set for growth. Only the Jackson Hole symposium can prevent 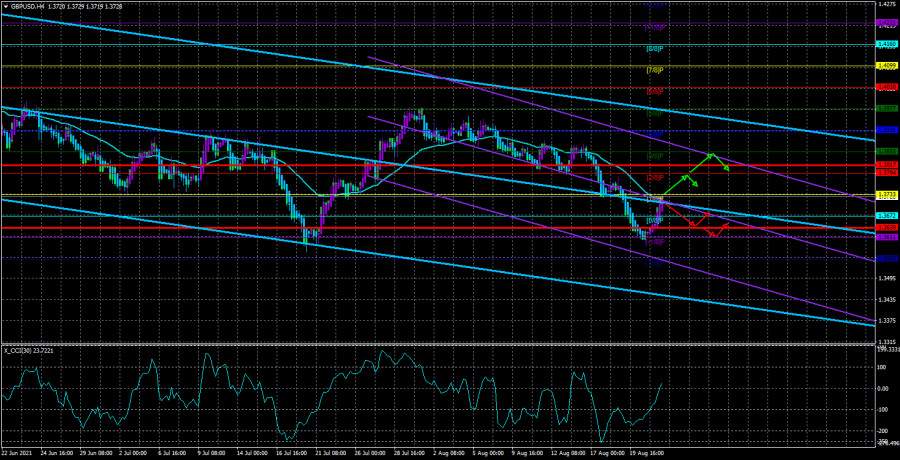 The British pound, paired with the US dollar, also continued the upward correction on Monday, which began on Friday. In previous articles, we have already noted that the fall of the British currency in the last week was much stronger than the euro's fall. And this is although no particularly important news was received from the UK. Hence the conclusion: the fall of the pound/dollar pair by more than 250 points last week is not quite fair. Moreover, we have repeatedly named the area of 1.3600-1.3666 as the target for a round of corrective movement against the global upward trend (on a 24-hour timeframe). In this area, the pair stopped for the second time in its fall over the past month. Thus, although we expect the correction to be completed by the current moment and the resumption of the global upward trend, it should be recognized that the technical picture of both currency pairs has not changed much. It has only lengthened. However, given that the correction for the pound will also last about six months, it is not at all critical that it will last one or two extra months. Thus, we still consider the option with the resumption of the upward trend as the main one. At this time, the task of the pound/dollar pair is the same as that of the euro/dollar pair: to gain a foothold above the moving average line and not fall below this line in the next couple of days. If the bulls cope with this task, then the chances of continuing to move north will become higher. It is also worth noting the fundamental background separately. It remains the same as it was before. Of the really important news recently, only the situation in Afghanistan can be singled out. However, this topic is no longer reflected on the charts of the foreign exchange market. Thus, everything remains the same. The Fed continues to pour hundreds of billions of dollars into the US economy, a global downward factor for the dollar. The markets expect that the Fed will reduce QE in the near future, and this factor may support the demand for the US currency for some time.

Now let's figure out what to expect from the current week regarding macroeconomic publications and fundamental events. In the fundamental review of the euro/dollar, we looked at the entire American news calendar, and there is essentially nothing to add to it. Only on Monday, data on business activity in the production and services sectors were published in the UK, and we can only note a decrease in the service sector in August from 59.6 to 55.5 points. There are no more events or publications planned for this week in the UK. In addition, there is now calm news in the UK as a whole. Only for a couple of days, the British political society became more active when the Taliban seized power in Afghanistan, and American and British troops began to evacuate. At this time, Boris Johnson spoke, who explained that the British troops "in principle achieved their goals in Afghanistan." At the same time, Boris Johnson's opponents also spoke out, so the prime minister came under another barrage of criticism for his decision on Afghanistan. But in general, the British Parliament is now on summer vacation, so nothing important in political terms is happening now either.

By and large, both in the United States and in Britain, everything now comes down to the pace of economic recovery, the rate of spread of the "coronavirus" and its new strains, as well as expectations for tightening monetary policy by central banks. Although the topic of "coronavirus" is not popular now, the number of cases of the disease continues to increase in the United States. Last week, more than 1 million new infections were recorded. In the UK, there are also problems with the epidemic. The fourth "wave" began about two months ago, and after a two-week decline, the incidence rates are now growing for the fourth week in a row. Last week, 226 thousand new cases of the disease were recorded. And this is although, in Britain, more than 75% of the adult population has already received both vaccinations. But, as we can see, the "coronavirus" continues to infect people, so specific fears for the economy will remain. Therefore, now we need to understand how much the British and American economies have slowed down and how this will affect the future decisions of the Bank of England and the Fed. According to the US GDP, we have already seen, if not a failure, then a weak value. The forecast was for the second quarter +8.5%, and the actual value was +6.5%. If the economies of both countries slow down, this will mean that quantitative stimulus programs will last longer than many people think now.

From a technical point of view, the pound is moving much more actively than the euro. However, over the past six months, the pair has not left the range of 1.3600-1.4200. Thus, in the long term, we have a flat. Since the price once again fell to the lower border of this side-channel last week, we should expect a new round of upward movement. In principle, most of the other factors also favor a new round of strengthening of the British currency. However, if the price manages to gain a firm foothold below the 36th level, it will mean that the bulls remain extremely weak, and the bears continue to rule the ball. In this case, we can expect a further decline in the pair's quotes. 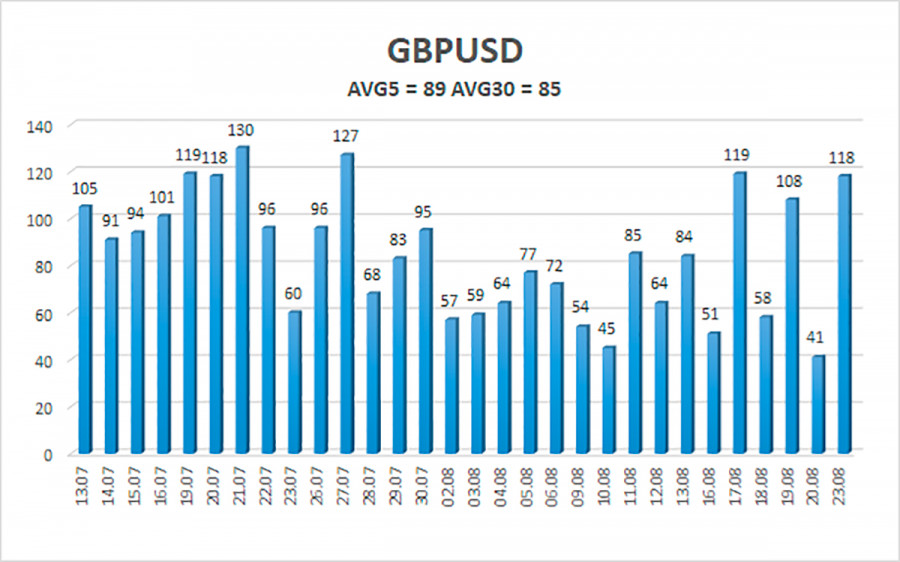 The average volatility of the GBP/USD pair is currently 89 points per day. For the pound/dollar pair, this value is "average." On Tuesday, August 24, we expect movement inside the channel, limited by the levels of 1.3639 and 1.3817. A reversal of the Heiken Ashi indicator downwards signals a possible resumption of the downward movement.

Interesting? Write a comment below.
 Overview of the GBP/USD pair. August 24. The British pound is set for growth. Only the Jackson Hole symposium can prevent
Forward 
Backward 