Overview of the GBP/USD pair. August 25. The dollar has retreated, but Jerome Powell can restore the market's faith in the 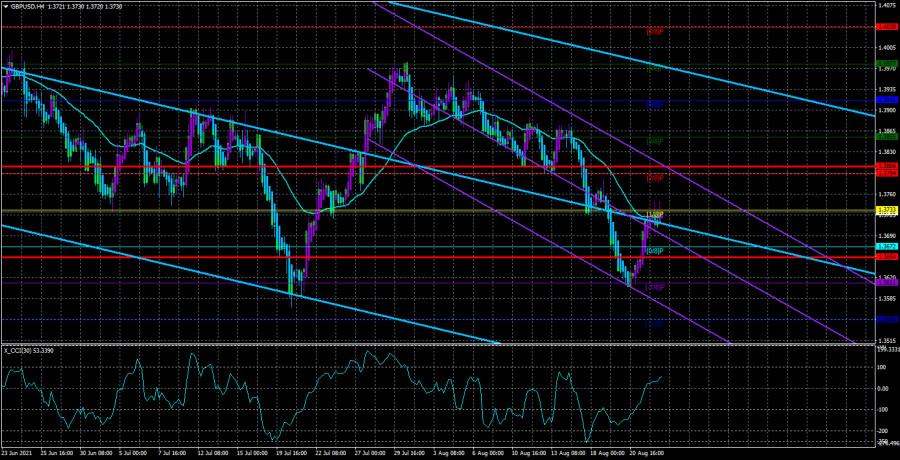 The British pound paired with the US dollar on Tuesday continued to adjust after the last round of downward movement on the 4-hour timeframe. Since no macroeconomic statistics and important fundamental events were planned for Tuesday, it is not surprising that the volatility on this day remained relatively low, and the upward movement stopped. However, so far, the pound is still in the correction stage against the last downward trend on the 4-hour timeframe. However, we remind you that the latest downward trend on the current TF is just a round of correction on the 24-hour against the global upward trend. The turn is far from the strongest, or rather very weak since it is even less than the lowest Fibonacci level of 23.6%. Roughly speaking, at the moment, since March 2020, the pound/dollar pair has managed to adjust by less than 23.6% of the entire upward trend. Thus, the strengthening of the US currency in recent months can be considered very weak.

Moreover, it is not yet possible to say that the bulls managed to seize the initiative with certainty. The price is very close to the moving average, and the markets seem to be completely confused. On the one hand, over the past few weeks, they have been actively forced to believe that the Fed is already preparing to announce the curtailment of the quantitative stimulus program. On the other hand, Robert Kaplan, the most powerful "hawk" in the Fed, suddenly declares that the regulator may postpone any tightening of monetary policy to a later date due to the spread of COVID and its new strains. Thus, perhaps the markets are now waiting for Jerome Powell's Friday speech during the Jackson Hole summit. Many market participants are waiting for Powell to make specific statements about the Fed's plans for the QE program? Or at least voicing particular deadlines for this program. In general, any detailed information so that the market finally understands which way the world's largest central bank is looking now? However, on Friday, Powell may disappoint and not tell the markets anything interesting. We believe that the Fed representatives want to wait for the next report on inflation and Nonfarm Payrolls, published on September 14 and 3, respectively. And the next Fed meeting is scheduled for September 22. Therefore, at this time, it makes no sense for Powell and his colleagues to force events at all. Moreover, the market does not react particularly strongly to the statements of, for example, Robert Kaplan.

As for the UK, there is absolutely nothing to note here right now. In Britain, parliamentarians are on vacation. And in addition, the calendar of macroeconomic events is empty this week. Thus, with all the desire, traders now have nothing to analyze. The British economy is now generally in the shadows.

On the one hand, it is being restored. On the other hand, state programs to support businesses and counteract unemployment will cease in September. Therefore, many experts predict a jump in unemployment already in September-October. It should also be noted that the "coronavirus" is spreading again in the UK. At this time, there is again a slight increase in disease cases, so the British economy, like the American one, is now also at risk. In general, now we really should only wait for the speech of Jerome Powell and the changes in fundamental global factors. Recall that the pound/dollar pair has been between 36 and 42 levels since January 20. We have a flat on the 24-hour timeframe. Thus, at this time, technical factors may have a more significant significance. For example, the price has worked out the lower border of the side channel twice in the last week, so it can now start a round of upward movement to the level of 1.4200. However, if Jerome Powell does not confirm the words of Robert Kaplan on Friday, then it will be quite possible to expect a resumption of the fall of both major currency pairs. Markets can now buy the dollar only if there is faith in the curtailment of the Fed's QE program in the near future. As for the Bank of England, few people now expect it to curtail quantitative stimulus. 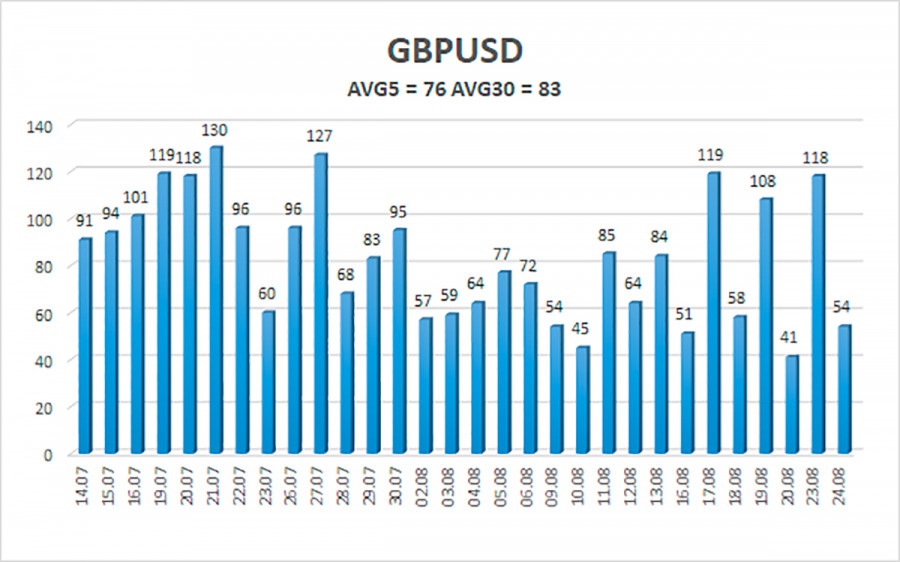 The average volatility of the GBP/USD pair is currently 76 points per day. For the pound/dollar pair, this value is "average." On Wednesday, August 25, we expect movement inside the channel, limited by the levels of 1.3654 and 1.3806. A reversal of the Heiken Ashi indicator downwards signals a possible resumption of the downward movement.

Interesting? Write a comment below.
 but Jerome Powell can restore the market's faith in the, Overview of the GBP/USD pair. August 25. The dollar has retreated
Forward 
Backward 