Overview of the GBP/USD pair. August 26. The consequences of Brexit: McDonald's has run out of milkshakes. 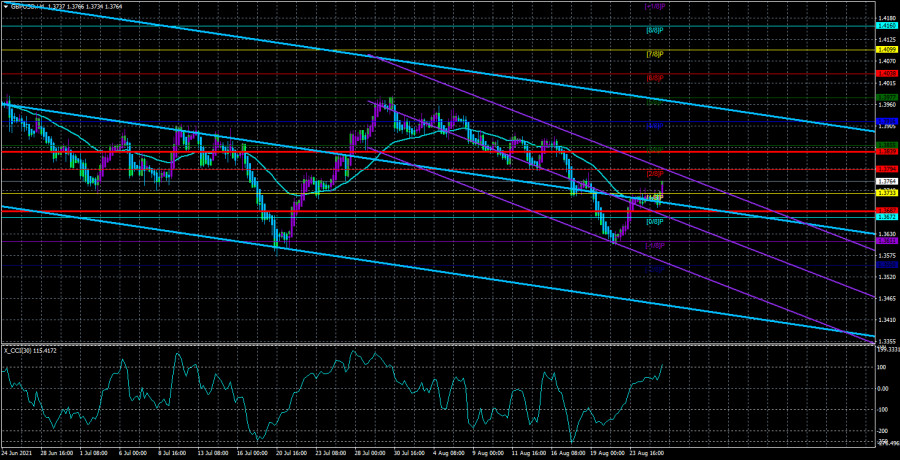 During Wednesday, the British pound paired with the US dollar overcame the Murray level "1/8" - 1.3733 and the moving average line. Therefore, the upward trend for the pound/dollar pair has changed, but so far, the whole movement still looks like a correction. However, it can be called strong only because the pair went up 150 points in a few days. The pound's volatility has also decreased very much in recent months, so now the movement by 150 points in three days is considered strong. Although previously 100-130 points per day – this was a normal result, which does not cause any surprise. But times are changing. In recent months, or even since the beginning of the year, both major currency pairs have been in very limited ranges, clearly visible when looking at the 24-hour timeframe. Since the price has already worked out at the 36th level twice, we assumed that a new round of upward movement would begin. However, the last few days show that the bulls are still weak, the markets are unwilling to buy the euro and the pound, and traders are waiting for Jerome Powell's speech this Friday. By the way, almost all of the really important fundamental background is now coming from overseas. In the UK, the "political vacation" continues, which was interrupted for several days only because of the situation in Afghanistan. Then, we recall, the dollar rose a little more, which again was logical since the markets do not like various geopolitical tensions, military conflicts, illegitimate change of power, and other events of an international scale. And the US dollar, which acts as a reserve currency, is in demand at such times. However, the markets have already calmed down about Afghanistan.

Moreover, nothing interesting is happening there, except that many Afghans do not want to live with the Taliban and, accordingly, are trying to leave the country by any means. Therefore, a mass evacuation has been going on for weeks, and British and American military forces have remained only at the Kabul airport. But they must leave this place of deployment before August 31. A virtual meeting of the leaders of the G-7 countries took place yesterday. The British presidency, represented by Boris Johnson, wanted to agree on the postponement of the deadline for the withdrawal of troops from the territory of Afghanistan, but the United States refused this proposal. After that, Boris Johnson said that the G-7 countries would send an official request to the Taliban movement with an appeal to ensure that all interested citizens can leave the country. At the same time, recognizing the Taliban as the legitimate government in the country was not put on the agenda.

Meanwhile, an event much more important than the change of power in Afghanistan has happened in Britain. Local McDonald's fast-food restaurants have run out of milk drinks. Representatives of the American company said that bottled water also ran out, and problems arose due to interruptions in the supply of certain types of goods, which, in turn, were caused by Brexit. Recall that earlier, we have repeatedly said that with the completion of Brexit, there was a shortage of truckers and truck drivers in the UK because most of the people of this profession came to the country to work from other EU and non-EU countries. With the completion of Brexit, the labor force can no longer get to the UK. Since the immigration rules have become more stringent, and the British, who have become accustomed over the past decades to having visitors working in various "black" jobs, are not eager to work as drivers. The Association of Road Transport of Great Britain estimated the shortage of drivers at 100 thousand. However, it should be noted that supply chain problems exist in the UK and around the world. And the coronavirus pandemic should be blamed for this, which is not going to slow down in some European countries and the United States.

As a result, the picture is now as follows: a new confident consolidation of the price below the moving average (or a rebound from the moving average) can provoke a resumption of the downward trend in the pound. However, we believe that there are extremely few fundamental and macroeconomic grounds for this now. However, both linear regression channels are still directed downwards, so all technical factors should be considered. It is necessary to work out any fundamental theory only if there are technical confirmations. 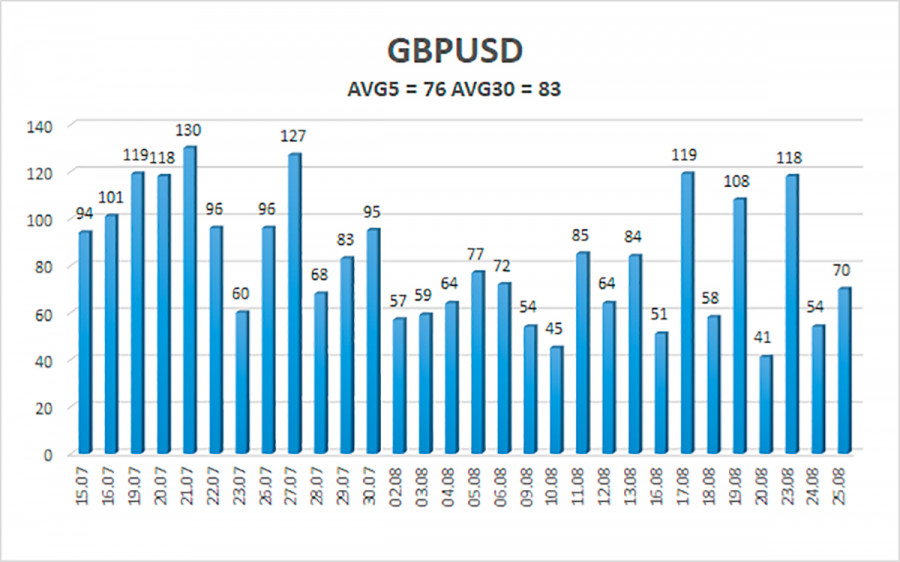 The average volatility of the GBP/USD pair is currently 76 points per day. For the pound/dollar pair, this value is "average." On Wednesday, August 25, we expect movement inside the channel, limited by the levels of 1.3654 and 1.3806. A reversal of the Heiken Ashi indicator downwards signals a possible resumption of the downward movement.

Interesting? Write a comment below.
 Overview of the GBP/USD pair. August 26. The consequences of Brexit: McDonald's has run out of milkshakes.
Forward 
Backward 