Overview of the GBP/USD pair. August 27. Great Britain, America, and the "coronavirus". 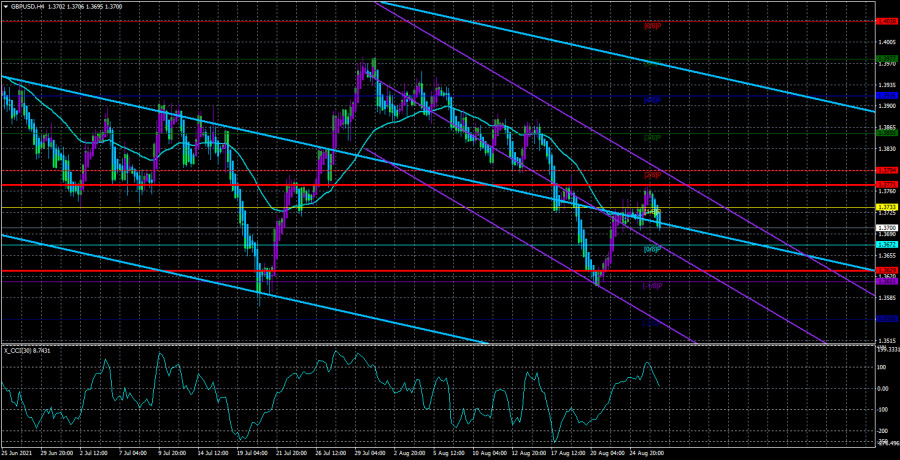 The British pound paired with the US dollar during Thursday made another attempt to start a new upward trend. In the illustration of the 4-hour timeframe, all the movements of the last weeks look very impressive. However, in reality, they are much weaker. If all the movements on the chart are weak, then the scale automatically increases, and they become visually stronger. But the volatility chart provided below does not know how to lie. And we can see that since about the end of July, the volatility of the pound/dollar pair has decreased very seriously. From a technical point of view, the picture is almost identical to the euro/dollar pair picture. The price has also worked out the target level (area) for a round of global correction several times (in our case, 1.3600-1.3666). It could not continue moving down after that and has been trying to start a new upward trend for several weeks. However, so far, nothing has come of this, which makes us think about alternative options. Although, from our point of view, the absolute majority of technical and fundamental factors signal in favor of the resumption of the euro and pound appreciation. However, at this time, the market and traders are in a very nervous state. After all, what is a decrease in volatility? It is a drop in the activity of the market. And why did the activity in the euro fall almost to zero, and in the pound - to very low values? Yes, because traders do not know what to do with both major pairs now. That is why the euro currency is practically immobilized, and the pound continues to be between the levels of 36 and 42 for more than six months. Of course, today's speech by Jerome Powell can have a very strong impact on the market, as well as on the US dollar. However, we believe that Powell's speech will be as bland as possible. In the UK this week, there were no important events and publications at all.

But, unfortunately, the topic of "coronavirus" is again taking first place in the world in terms of importance. The latest news on this topic suggests that humanity can be counted as a victory only in the confrontation with complications and hospitalizations caused by the "coronavirus." There are much fewer such cases with the invention of vaccines, and fully vaccinated people practically do not get to hospitals. However, at the same time, several reports from different sources have already said that the effectiveness of vaccines against the "delta strain" is frankly low. The effectiveness of immune protection after vaccination decreases over the next 6-12 months, and many citizens may need a third vaccination. At the same time, the number of disease cases has been growing for several weeks in a row in both the US and the UK. And this is although, in Britain, 80% of the population has already received both vaccinations, and in the States – the number of such citizens exceeds 50%. However, this does not prevent the "coronavirus" from continuing to infect people. For example, in the United States, an average of 150,000 people get sick per day. In the UK - an average of 33 thousand. At the same time, in the United Kingdom, the peak of the current "wave" fell in mid-July, and many believed that now the number of infections will only decrease. However, in reality, it has only been growing in the last few weeks. In several states of America, a high workload of the healthcare system is reported, as the number of infections and the number of hospitalizations is growing. In general, the whole world is on the verge of another round of confrontation with the pandemic.

Even because there are now many vaccines, it is impossible to predict how they will develop and in whose favor. Unfortunately, if the number of diseases continues to grow, it will almost inevitably mean that the economies of all world countries will slow down again. Even if we consider only the economies of the countries we are interested in (the EU, the USA, the UK), this is still a decrease in the pace of recovery. Even if there are no new quarantines and "lockdowns." And it isn't easy to guess what will happen in the foreign exchange market if COVID continues to advance. After all, the increase in cases of the disease is happening now. And with the arrival of a colder season, it is unlikely that the number of diseases will decrease. Thus, the dollar or the pound is unlikely to have an advantage now in the medium term. Although in the long term, everything speaks in favor of a new fall in the dollar. 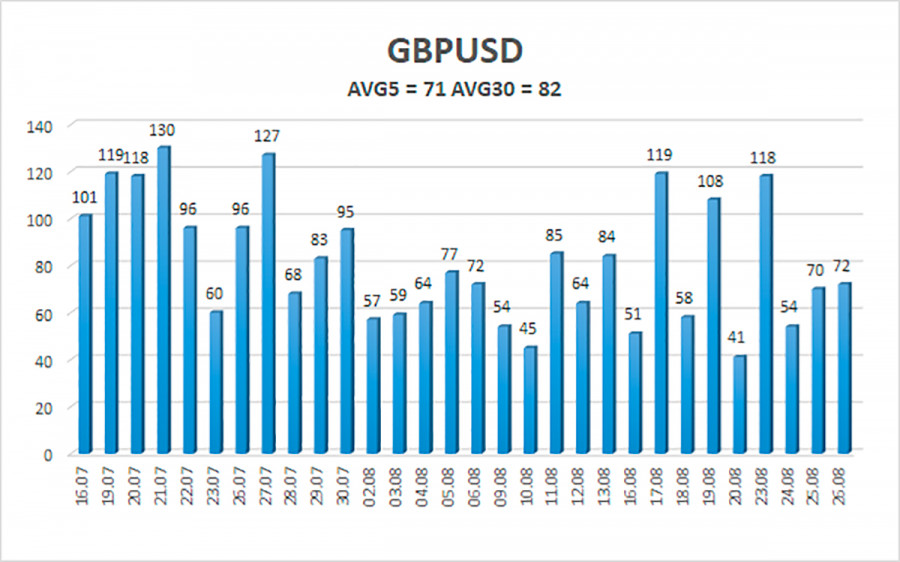 The average volatility of the GBP/USD pair is currently 71 points per day. For the pound/dollar pair, this value is "average." On Friday, August 27, we expect movement inside the channel, limited by the levels of 1.3629 and 1.3771. A reversal of the Heiken Ashi indicator upwards will signal a possible resumption of the upward movement.

The GBP/USD pair has been fixed below the moving average line on the 4-hour timeframe. Thus, today you should stay in sell orders with targets of 1.3672 and 1.3629 until the Heiken Ashi indicator turns up. Buy orders should be considered in the case of a reverse price consolidation above the moving average line with targets of 1.3771 and 1.3794 and keep them open until the Heiken Ashi turns down.