Overview of the GBP/USD pair. August 3. Britain is engaged in the deportation of Europeans. 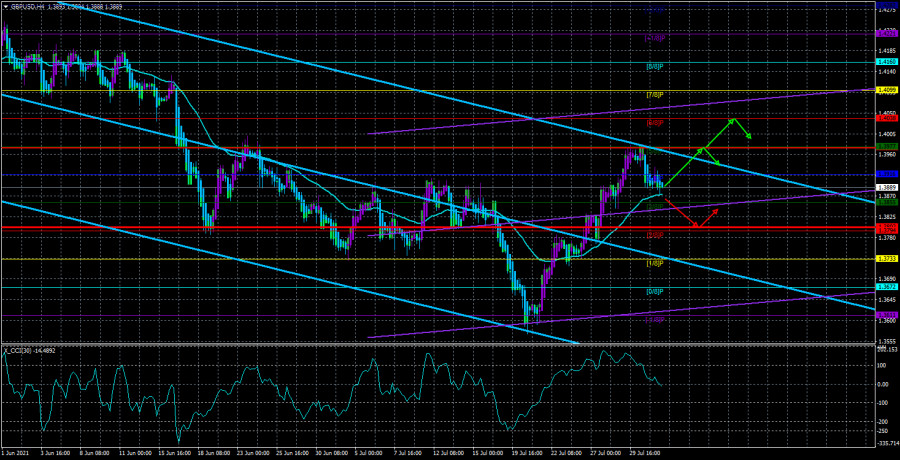 The British pound moved quite calmly on Monday. In the case of the European currency, we would say that everyone is already used to this, but this is not the case for the pound. The pound/dollar pair is trading quite actively and shows a trend movement. It does not stand still. Thus, it does not even really need a fundamental background or macroeconomic statistics right now. In the case of a background that does not have a pronounced negative or positive color and is not directly related to macroeconomics, there are always doubts: is it important for the markets or is it interesting as tabloid reading for investors and traders? Does criticizing Boris Johnson in the UK now somehow affect the exchange rate of the British currency? And if a political crisis begins? And if Boris Johnson is "asked" to leave? These questions cannot be answered unequivocally. We remind you that any currency is affected by several factors even in calm times, some of which can not even be tracked and analyzed. Thus, in principle, you can never say that any one factor or news is the only one that affects the pair's movement. It is impossible to conclude that the pound or dollar is growing or falling only because of the "coronavirus." It cannot be concluded that the US currency is declining due to the "dovish" policy of the Fed. It is always a set of factors, which is called the background. So this background in the UK is now very strong. Or at least interesting. The fact is that Brexit has formally ended, but it is still in operation. Or rather, its consequences. Recall that there were several conflict situations between London and Brussels in 2021. As soon as Brexit was completed, problems immediately began in the British-European relations that had just begun. At first, London accused the European Union of not treating all its partners equally fairly and creating additional pressure on British companies, completely restricting access to its market. Then there were many questions about the trade agreement with the EU, which turned out to be a trade agreement, although it would be better for the UK to have a "service sector agreement." Then London unilaterally violated the "Northern Ireland Protocol" several times. Now it has become known that several million citizens of the European Union can be deported from the UK, even if they applied for a residence permit before Brexit. In other words, those Europeans who have been living in Britain for a very long time and legally are being threatened with deportation. The legal charity organization BID has explained this situation. In their opinion, the UK violates the agreements with the EU, spelled out in the Brexit agreement, and tries to deport as many people from the country as possible. What is it? Revenge on the European Union for its intransigence on the issue of revising the" Northern Ireland Protocol," which Boris Johnson insists on? An eye for an eye?

In addition, the "Scottish issue" is still acute for the UK. After the victory in the parliamentary elections of Nicola Sturgeon's party, the head of Scotland was even more confident in the popular support and promised that the referendum would be held within the next 1.5-2 years. It should take place approximately before the end of 2023. Recently, this topic has subsided a little. However, a member of the British government, Michael Gove, recently said that the British authorities would not prevent a new referendum on independence in Scotland. However, Gove believes that this should be the initiative and will of the people and not the Scottish government. Gove explained that London really should give official permission to hold a referendum, but at the same time, Boris Johnson should not refuse Edinburgh if it is a firm decision of the Scottish people. The most interesting thing is that the latest opinion polls have shown that the number of Scots who support separation from the UK is decreasing. And now it is far from the fact that those who advocate separation from London and return to the European Union will win the referendum. Of course, if the referendum itself takes place at all. However, this is still a potential problem for the Kingdom.

Thus, if we count all the potential problems of Britain, then the pound should probably already rush down again. However, the matter is that the pound continues to remain inside the global upward trend. And we are only forced to repeat every day those factors that remain the strongest and capable of pushing the pound further up. It is a factor of the Fed's injection of trillions of dollars into the American economy. It is a factor in completing two turns of the corrective movement against the global trend in the area of 1.3600-1.3666. It is a factor in maintaining the global upward trend since corrections are not yet pulling for the title of "the beginning of a new trend." Hence the conclusion: we continue to expect the growth of the British currency. Last week, the Fed held a meeting, and this week the Bank of England will hold a meeting. We do not expect any supernatural information or important decisions from the Bank of England. Most likely, this will be the same maximum passing meeting as the Fed. Therefore, the market reaction may be local. In technical terms, the price now continues to remain above the moving average line. Thus, the upward movement can resume at any time. The lower linear regression channel has already turned up, which signals an upward trend in the short term. 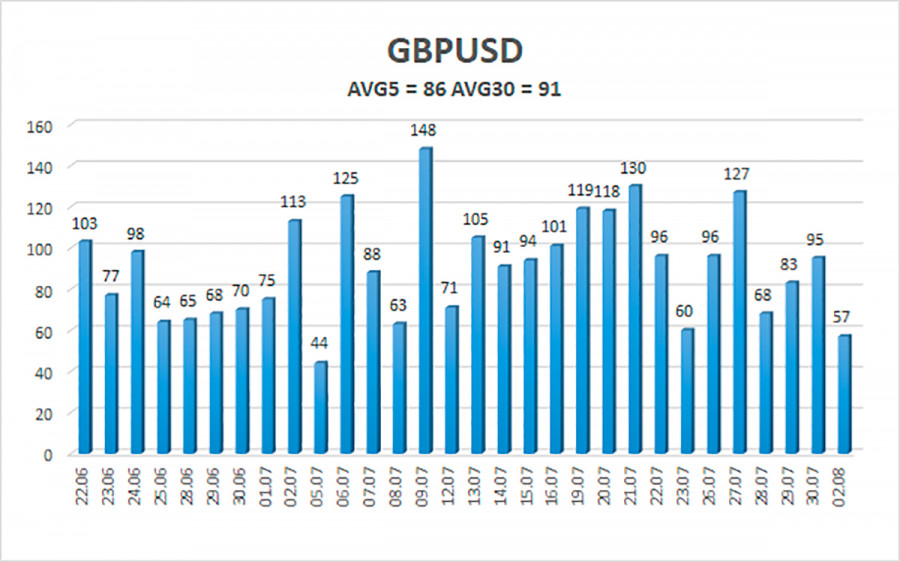 The average volatility of the GBP/USD pair is currently 86 points per day. For the pound/dollar pair, this value is "average." On Tuesday, August 3, we expect movement inside the channel, limited by the levels of 1.3802 and 1.3975. A reversal of the Heiken Ashi indicator back to the top will signal the resumption of the upward movement.

Interesting? Write a comment below.
 Overview of the GBP/USD pair. August 3. Britain is engaged in the deportation of Europeans.
Forward 
Backward 