Overview of the GBP/USD pair. August 4. The meeting of the Bank of England: the bank is different, and the market has the 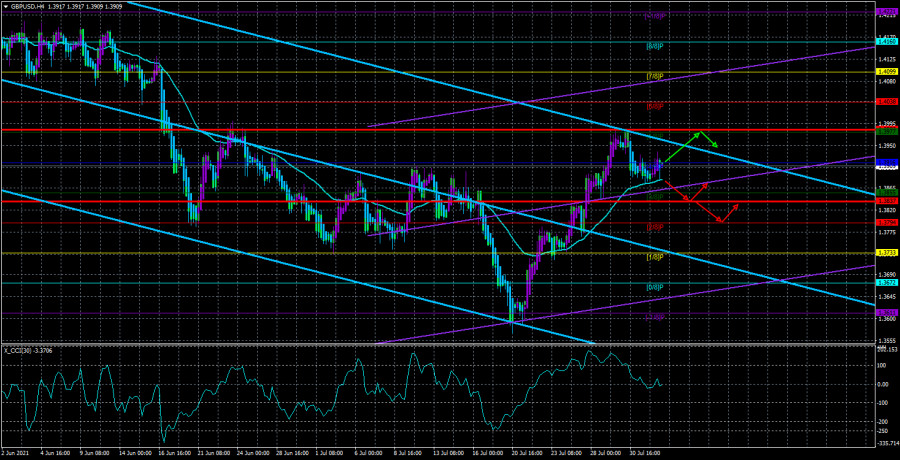 The British pound was also trading rather weakly on Tuesday. In general, recently, we have repeatedly emphasized that the euro/dollar pair is trading very poorly. However, it is somehow not customary to say anything like that about the pound/dollar pair. It should be remembered that the pound has always been more volatile than the euro. Therefore, the euro's volatility of 50 points corresponds to the pound's volatility of 80 points. However, this is when comparing these two currencies. Traders do not need such comparisons and coefficients because, for them, a point is a point. Therefore, it is considered that the pound/dollar is moving "well" since its average volatility per day continues to be at least 80 points, and the euro/dollar is bad. The pound/dollar pair is indeed moving quite actively, but in global terms, the movements of the two main pairs are extremely similar. In the article on EUR/USD, we have already drawn attention to the fact that the factors that affect both major pairs can only be American. And, from our point of view, the main factor that continues to have a strong impact on the US currency remains the factor of the Fed's injection of hundreds of billions of dollars into the US economy, which inflates the money supply, leading to the depreciation of the dollar and an increase in inflation. However, the States are still very lucky that inflation has increased so far to only 5.4%. However, this is considered a very high value, not seen in America for 13 years. If we calculate how much money has been poured into the American economy over the past year and a half, then inflation (if not for the status of the "number one currency in the world" for the dollar) would be much higher. Thus, we believe that the US currency will continue to depreciate in 2021, and the euro and the pound will continue to grow.

However, this week, the attention of traders will not be focused on this factor. Another central bank (the Bank of England) will summarize its meeting results on Thursday, announcing its results, and familiarize the markets with updated forecasts for the main macroeconomic indicators. Recently, there has been a fairly common opinion that the Bank of England and the Fed may become one of the first central banks in the world to start tightening their monetary policy. However, with its last meeting and numerous speeches by Jerome Powell, the Fed dispelled these myths. However, this cannot be said about the Bank of England yet. Although, if we consider the macroeconomic indicators of the UK and the US, it becomes clear that the chances of completing QE and raising the rate are much more significant in the US than in Britain. First, US GDP growth in the second quarter was 6.5% q/q, and the markets were upset about this, as they expected an increase of 8.5%. In the UK, GDP is expected to be +5.1% q/q in the second quarter.

Someone will say that the difference is not so big. That's just the first quarter of 2021. The British economy finished with -1.6% q/q, and the American economy - with the result of +6.4%. Second, British inflation painfully doubled to 2.5% by July, while American inflation accelerated to 5.4%. Thus, the Fed has much more reason to tighten monetary policy. However, the Fed does not want to take this step, stimulating the labor market to a full recovery. In the UK, the situation is slightly different. If the labor market in the United States collapsed with the beginning of the crisis, the unemployment rate began to decrease. In Britain, thanks to government programs, mass layoffs were avoided. However, this September, most state programs supporting business will end, so experts predict a wave of layoffs and an increase in unemployment to 5.4% (in the States now 5.9%). Thus, the Bank of England has no special reason to even talk about curtailing the quantitative stimulus program with the current economic recovery pace and the current value of inflation.

Nevertheless, the markets will be waiting for information about when the QE program will be curtailed. After all, one member of the monetary committee of the Bank of England (chief economist Andy Haldane) voted "against" maintaining the QE program in current volumes at the last two meetings. However, Haldane has already left the monetary committee, so the most "hawkish" member of the BA will no longer participate in the vote. According to rumors, two more monetary committee members may vote at the August meeting in favor of reducing the quantitative easing program. However, these are only rumors, and it is still a maximum of two votes out of nine.

Thus, as a summary, we can say that the Bank of England can present certain surprises. Two or more members of the monetary committee may vote for the reduction of the QE program. These may be comments from BA members about the timing of the QE program curtailment. These may be increased forecasts for GDP and inflation for 2021-2022. Any such surprise can cause the growth of the British currency today, which has felt just fine without such help in recent weeks. However, additional support for the pound will only accelerate the execution of our forecast, which assumes the return of the pair's quotes to the level of 1.4240 and the resumption of the global upward trend. In any other case, the British currency may fall under the market sell-off. However, it is unlikely that its decline will be long and strong. From a technical point of view, the bears failed to return the pair below the moving average line, so the path to the north is still open. 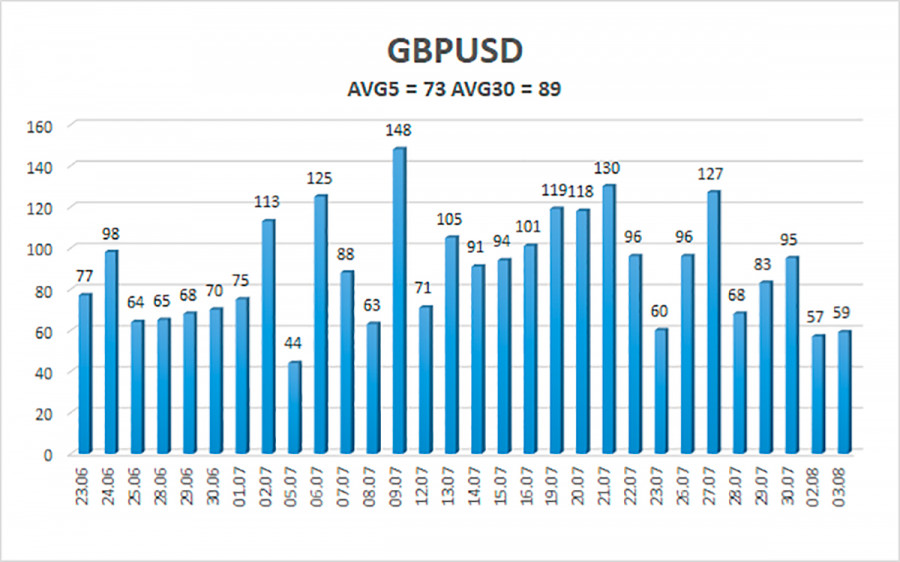 The average volatility of the GBP/USD pair is currently 73 points per day. For the pound/dollar pair, this value is "average." On Wednesday, August 4, we expect movement inside the channel, limited by the levels of 1.3837 and 1.3982. A reversal of the Heiken Ashi indicator back down will signal a new round of corrective movement.

The GBP/USD pair continues to be located above the moving average on the 4-hour timeframe. Thus, it would be best if you stayed in the pair's purchases with the targets of 1.3977 and 1.4038 until the Heiken Ashi indicator turns down. Sell orders should be considered if the price is fixed below the moving average with targets of 1.3837 and 1.3794, and keep them open until the Heiken Ashi turns up.

Interesting? Write a comment below.
 and the market has the, Overview of the GBP/USD pair. August 4. The meeting of the Bank of England: the bank is different
Forward 
Backward 