Overview of the GBP/USD pair. August 5. The US labor market is extremely weak! 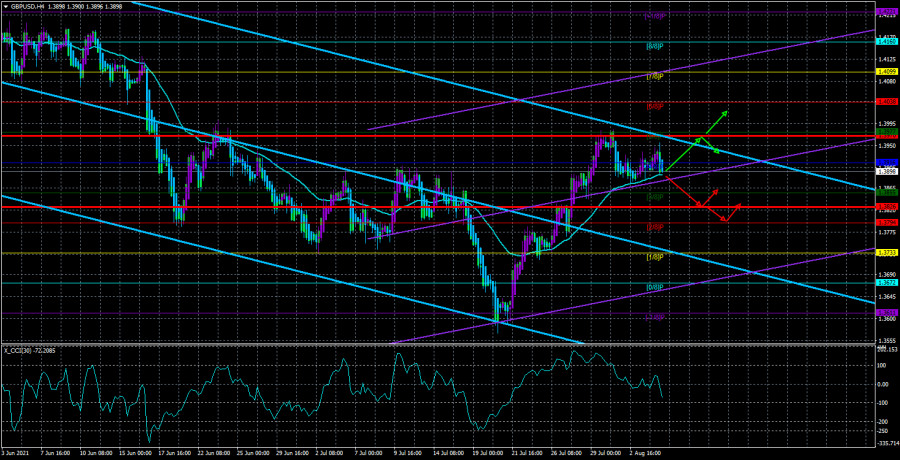 The British pound continued to suffer from the disease of the European currency on Wednesday. Trading is extremely weak. Recently, traders on the British pound also do not find any special reasons to continue trading actively. However, if in the case of the euro, the last strong movement was at the penultimate meeting of the Fed (that is, a month and a half ago), then in the case of the pound a couple of weeks ago, the pair made an impressive movement first down by 300 points, and then up by 400 points. Thus, in general, it is still impossible to complain about weak volatility or the absence of a trend for the pound/dollar. It's just that the beginning of a new trading week was not in favor of this pair. There were no important macroeconomic publications or important fundamental messages. Therefore, the volatility has decreased significantly. However, we also cannot conclude that when the pair moved more actively, the reasons for this were hidden in the "foundation" and "macroeconomics." Most likely, these two sets of factors now really have only a minimal impact on the movement of the euro/dollar and pound/dollar pairs. However, we recall that in the past, this state of affairs was considered normal. What is driving them if the markets do not respond to macroeconomic statistics and the fundamental background? From our point of view, all the same, global technical and fundamental factors. Recall that the technical factor favors maintaining the global upward trend and completing its two rounds of correction at once. The fundamental factor suggests that the US economy continues to be filled with dollars, which ensures an increase in inflation and the depreciation of the US currency. Thus, we believe that both the euro and the pound will continue to grow, and the dollar will continue to fall, despite the pace of economic recovery and the data from COT reports, which already speak in favor of the fall of the euro and the pound. But, since these factors are global, it is very difficult to track them or see them on timeframes lower than 24H.

The results of the Bank of England meeting will be summed up in the UK today. From our point of view, the meeting will be a passing one. The only intrigue is whether the number of members voting for changing the quantitative stimulus program within the monetary committee will increase from one or not. The chief economist of the Bank of England, Andy Haldane, has already left his post and is no longer a member of the monetary committee. And it was he who voted for these changes at the last two meetings. The number of votes may even decrease back to zero. In any case, we do not expect drastic changes either in the voting situation, in the BA's rhetoric, or the forecasts for GDP, inflation, and unemployment. Thus, most likely, the reaction of traders will be as restrained as possible, as it was last week when the results of the Fed meeting became known.

In the meantime, we would like to draw the readers' attention to the fact that the markets managed to ignore another important report yesterday, which was supposed to cause the fall of the US currency. The ADP report on the change in the number of employees in the US private sector, although it is considered the second most important report after Nonfarm Payrolls, nevertheless also shows the state of the US labor market. And I must say that he regularly disappoints traders. Recall that the Fed has made it clear that restoring the labor market to pre-pandemic levels is the number one goal. Thus, it is the Nonfarm Payrolls and ADP reports that are the most important at this time. At least, it seemed so until yesterday. However, yesterday, it became known that the ADP value in July was only 330 thousand, with forecasts of almost +700 thousand. And this is the second decline in a row after +886 thousand new employees were recorded in May. Thus, we see a tendency to decrease and a complete disregard for such important information by the markets. Recall that this Friday, a report on Nonfarm will also be published in the States. It turns out that it can also be ignored, which we would very much like to avoid because the euro/dollar pair has been standing still for a long time, and the pound/dollar threatens to get the same disease. And in any case, there should be a reaction of the markets to such important publications. It is also important that the US labor market does not show the necessary pace of recovery. Recall that according to our calculations, the minimum growth in the number of employees per month should be 0.5 million to talk about a full recovery of the labor market in 14-15 months. If the labor market is recovering more slowly, it makes no sense to even talk about curtailing the QE program before 2022. And it will be possible to talk about raising rates no earlier than 2023. Recall that according to the "dot plot" schedule, most Fed members see the first rate increase in 2023. Thus, all these factors are "bearish" for the US currency. We also add a local fundamental background to the technical and fundamental factors of the fall, which can also work against the US currency in the coming years. Since the pound/dollar pair started growing too sharply two weeks ago, now a correction against this movement may take place for a week or even two. But the upward trend persists, and the price is still located above the moving average. Therefore, it is not necessary to sell the pair now. 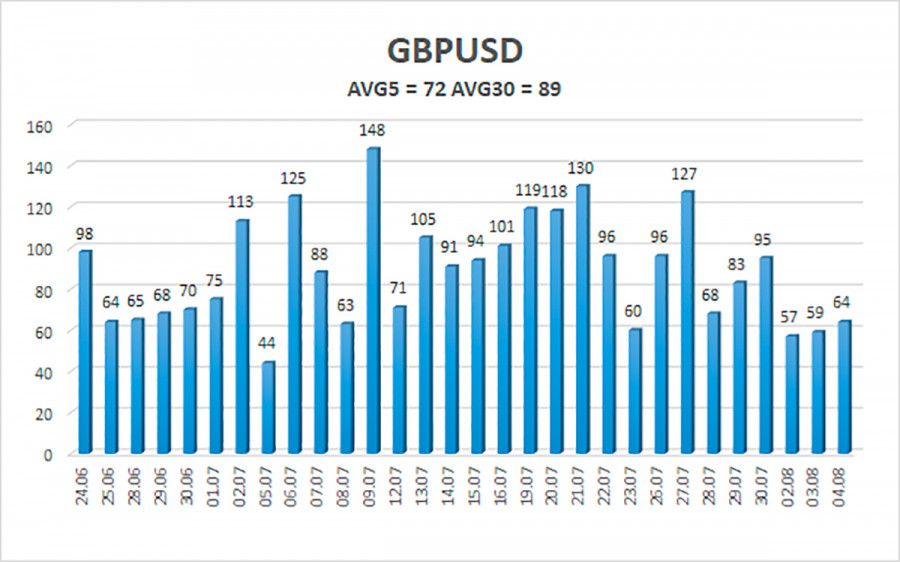 The average volatility of the GBP/USD pair is currently 72 points per day. For the pound/dollar pair, this value is "average." On Thursday, August 5, we expect movement inside the channel, limited by the levels of 1.3826 and 1.3970. The upward reversal of the Heiken Ashi indicator signals the completion of the correction cycle.

Interesting? Write a comment below.
 Overview of the GBP/USD pair. August 5. The US labor market is extremely weak!
Forward 
Backward 