Overview of the GBP/USD pair. August 6. The number of those who voted for the reduction of the QE program in the Bank of 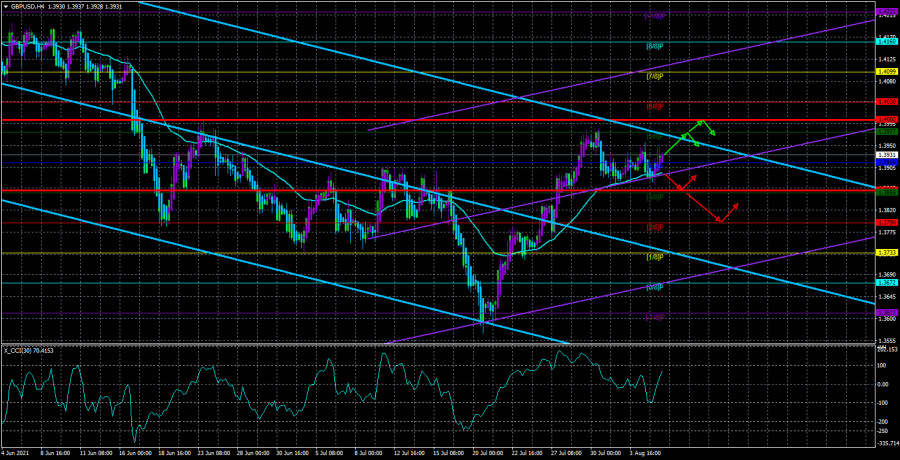 The British pound on Thursday began to grow in the morning. It is difficult to say what caused this growth. However, we can confidently say that traders have been waiting for the Bank of England meeting since the very beginning of this week. And we can say that this meeting turned out to be completely passable. However, in previous articles this week, we have repeatedly drawn attention to this. However, we will talk about the meeting a little later. First of all, it should be noted that the technical picture of the pound/dollar pair has not changed at all over the past day. The price is still above the moving average line, and Thursday's volatility did not amount to some fabulous figure. We can say that everything was relatively calm during the past day. Of course, when the meeting results began to appear, the markets began to get nervous, and the pair began to be thrown from side to side. However, such movements ended very quickly. Thus, we do not believe that the decisions taken by the Bank of England have affected anything at all. Simply because no special decisions and statements were made. It means that the overall fundamental background and the overall picture of the situation have not changed. We still expect the upward movement of the pound/dollar pair, which will mean the depreciation of the US currency. We believe that the dollar will continue to fall due to the actions of the Fed, which continues to pour hundreds of billions of dollars into the US economy, as well as inflation, which in the next couple of months may update the 25-year record.

Now let's start considering the results of the Fed meeting. The main decisions are as follows: the key rate and the volume of bond purchases remained unchanged. The final communique of the Bank of England says that the monetary committee believes that the current monetary policy fully corresponds to the state of the economy. Therefore, it does not need to be adjusted. It should also be noted that none of the eight members of the monetary committee voted for a rate increase or reduction. And one member of the monetary committee voted to reduce the QE program. Recall that Andy Haldane voted "for" changing the QE program at the last two meetings, but he left his post last month, so he no longer took part in the new vote. It turns out that another member of the BA board voted "for" curtailing the QE program. Presumably, Michael Saunders made unequivocal hints that he was ready to support a reduction in QE. Thus, one more "for" vote was added to one "for" reduction at the last meeting.

However, in total, it remained one. All the same, only one member of the monetary committee believes that monetary policy should be tightened. In principle, the Bank of England now has accumulated all the same thoughts and problems as the Fed. Recall that just a couple of days ago, NIESR published a new forecast for inflation, according to which the indicator may grow to 3.9% y/y by the end of this year. Thus, high inflation may also be a companion for Britain in 2021-2022. And, most likely, the board of the British regulator will also pay close attention to this indicator. And, most likely, the British regulator will also be under pressure from the markets due to the unwillingness to keep inflation from further growth. At a press conference, the head of the Bank of England, Andrew Bailey, said that the regulator's main task is to return people to work after quarantine measures were completely lifted in the country. According to Bailey, the return of people to work is a serious problem. However, the UK government coped with the task of limiting the growth of unemployment perfectly well during the pandemic, thanks to various state programs aimed at providing financial assistance to all employers. However, in September of this year, these programs will be canceled, so many experts expect an increase in unemployment to 5%. Therefore, the Bank of England sets its main goal now to get people back to work. As we can see, the policy of the Fed and the BA practically do not differ from each other. Most likely, the Bank of England will also not seriously consider reducing the quantitative stimulus program before the end of 2021.

What is the result? As a result, the meeting of the Bank of England can be called a passing one. From our point of view, the pound will continue to gravitate towards growth due to fundamental global factors. However, since the growth of the pound quotes has been going on for several weeks with almost no rollbacks, a downward movement may still follow in the coming days as part of a technical correction. The lower channel of the linear regression has already turned up, so the trend is slowly changing its direction to the north.

Consequently, the prospects for growth of the British currency are also quite good. From our point of view, the pair will be pushed up by the same factor of injecting trillions of dollars into the American economy by the Fed. Also, as in the case of the EUR/USD pair, we are waiting for the update of three-year highs and the continuation of growth above them. So far, it is difficult to imagine what can interfere with the execution of this option. Even the COT reports do not look convincing now since other important ones overlap this factor. 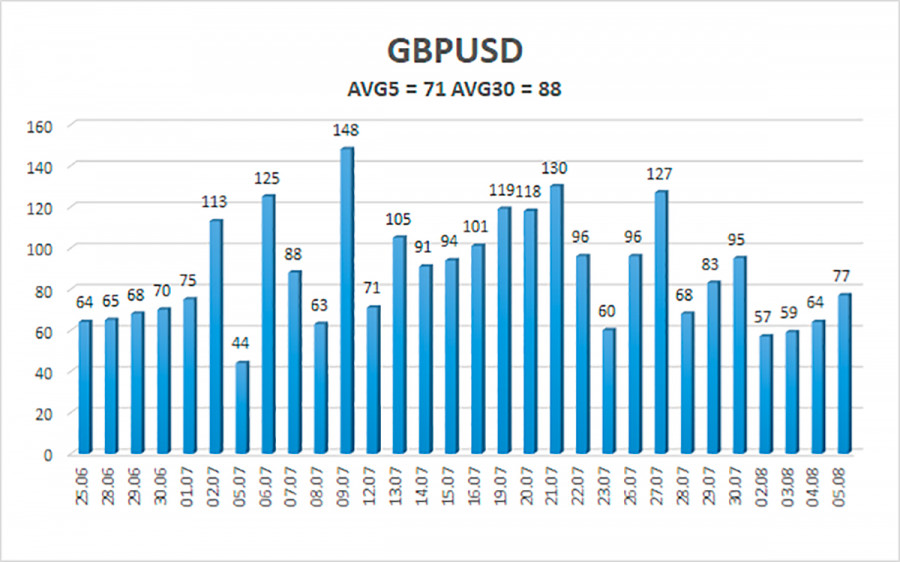 The average volatility of the GBP/USD pair is currently 71 points per day. For the pound/dollar pair, this value is "average." On Friday, August 6, we expect movement inside the channel, limited by the levels of 1.3860 and 1.4002. The reversal of the Heiken Ashi indicator downwards signals a new round of downward correction.

Interesting? Write a comment below.
 Overview of the GBP/USD pair. August 6. The number of those who voted for the reduction of the QE program in the Bank of
Forward 
Backward 