Overview of the GBP/USD pair. August 9. Will the pound wait until the euro finishes the correction? Is the British economy 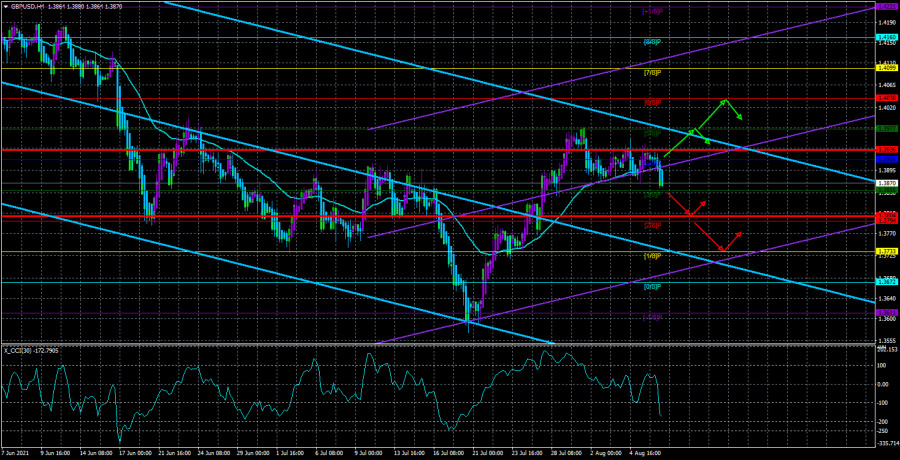 The British pound moved very strangely on Friday. This oddity lies in the fact that its volatility turned out to be weaker than for the euro. However, both major currency pairs were affected by the same macroeconomic factors on Friday from America. Nevertheless, the euro showed a greater decline on the last trading day of last week. Why this happened is quite difficult to say. However, we have one hypothesis about this. As we have already said, the euro/dollar pair may decline to the level of 1.1700 or even slightly lower to update the previous local minimum within the framework of a global upward trend that has lasted for a year and a half. But the pound has already updated its previous local minimum as part of its global upward trend. It turns out that the pound has already formed two rounds of correction. The second of which went beyond the minimum of the first, and the euro did not. Therefore, the hypothesis is that the pound will "wait" until the European currency corrects, after which both European currencies will begin to form a new upward trend section.

Of course, there may be more than one such hypothesis. You should always look at the technical picture of several timeframes and compare it with any fundamental data and hypotheses. However, our reasoning is based on the fact that the global upward trend is not complete. Therefore, it will resume. Since the reasons for the continuation of the upward trend come from the States, the euro and the pound should move up approximately equally, as they have done in the last year and a half. Therefore, if the British currency has already fallen to its previous lows, and the euro has not, then a small uncorrelation should be leveled as soon as possible. In general, it should become clear within the next week whether we are correct or not.

Now let's look at the calendar of macroeconomic events for the next week. In the article on the euro/dollar, we have already found out that the only report from America will be the inflation report. At the same time, it is unlikely to help the US currency continue to grow. What is in the UK? There will also be a small amount of macroeconomic statistics and fundamental events in the UK this week. By and large, all the most important and interesting events will take place on Thursday. On this day, reports on GDP for the second quarter, industrial production for June, and several secondary reports will be published. Of course, the most excellent attention will be focused on the GDP report, which should grow by 4.8-5.1% in annual terms. We cannot say that these are strong figures, since the British economy ended the first quarter "in the red" by 1.6%.

Moreover, the American economy, which is objectively stimulated much better than the British one and recovering much faster than the British one, has already shown that growth is slowing down. The growth was only 6.5% in the second quarter, although the markets had expected 8.5%. Thus, in Britain, it is also far from the fact that GDP will be +5%. However, we would also like to note that almost any value in the reports on British GDP and US inflation can only provoke a local reaction of the markets. These reports are unlikely to be able to change the general trend and the global trend. Therefore, in any case, we should expect a specific reaction from the markets on Wednesday and Thursday. However, it is unlikely to be strong and trend-forming.

In technical terms, the pound/dollar pair is now painfully fixed in half a little below the moving average line, so formally, the trend has changed to a downward one. However, will the downward movement be able to continue when it was very weak on Friday, although all macroeconomic factors spoke in favor of a fall? Most likely, we will see a very small correction, after which the movement to the north will resume. The lower linear regression channel has already turned up. Now we are waiting for a gradual reversal of the senior channel. We also note once again that the pound has worked out its target area of 1.3600-1.3666, so now it is ready for the resumption of the upward trend. Like the euro currency, it no longer needs to go down again and update its local lows. I would also like to note that the fundamental background from the UK and the US is not exactly absent now, but at the same time, it finds almost no reflection on the charts of the movement of the currency pair. Thus, we conclude that the pair's exchange rate is still influenced only by global factors: fundamental and technical. Recall that the first implies a further fall in the US currency due to the Fed's policy, which continues to print money in hundreds of billions. The second implies a fall in the dollar because two rounds of correction against the upward trend have ended. 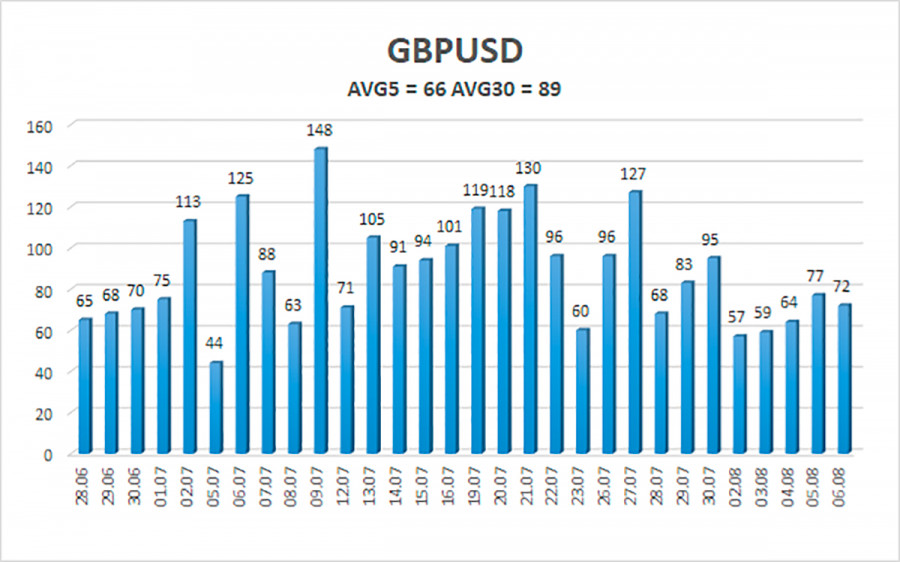 The average volatility of the GBP/USD pair is currently 66 points per day. For the pound/dollar pair, this value is "average." On Monday, August 9, we expect movement inside the channel, limited by the levels of 1.3804 and 1.3936. The upward reversal of the Heiken Ashi indicator signals a possible resumption of the upward trend.

The GBP/USD pair has been fixed below the moving average on the 4-hour timeframe. Thus, today, it is necessary to remain in the pair's sales with the targets of 1.3804 and 1.3733 until the Heiken Ashi indicator turns upwards. Buy orders should be considered if the price is fixed back above the moving average line with targets of 1.3936 and 1.3977, and keep them open until the Heiken Ashi turns down.

Interesting? Write a comment below.
 Overview of the GBP/USD pair. August 9. Will the pound wait until the euro finishes the correction? Is the British economy
Forward 
Backward 