Overview of the GBP/USD pair. September 1. The UK has completed the evacuation of military personnel from Afghanistan and 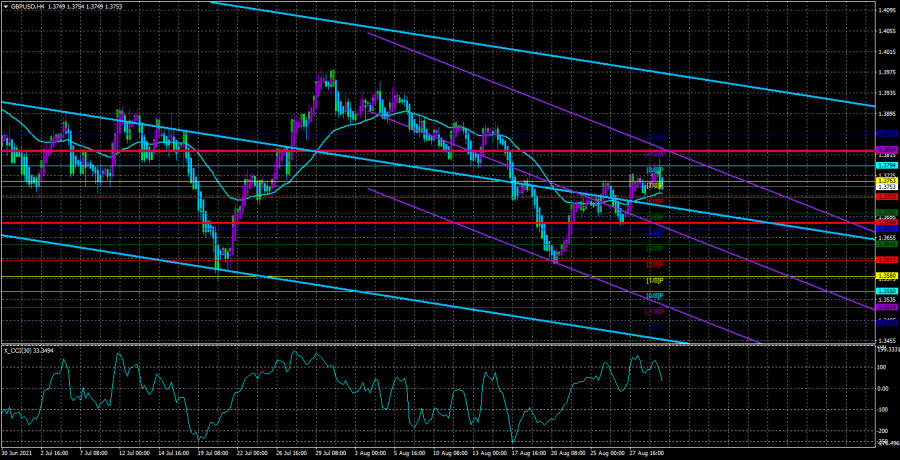 The British pound paired with the US dollar during Tuesday also sought to show growth. The euro grew on Tuesday thanks to a fairly strong report on European inflation. However, the pound did not have any macroeconomic statistics to support it. Thus, in general, the upward trend for the pound/dollar also persists, but the upward movement cannot be called strong. We have already said earlier that the MT4 terminal independently changes the scale depending on the movements placed on the chart for a certain period.

Given that the volatility has decreased significantly in recent months, and the pair has been trading in the 1.36-1.4240 channel for more than six months, the scale is automatically increased, which creates the illusion of the strength of current movements. The pair went up only 180 points from the last local minimum, which is not so much. Especially for the pound, the volatility of 100-130 points per day is considered normal. But now we are talking about 60-80 points per day, no more. In general, we continue to expect a return to the level of 1.4240, which the price has already worked out twice in recent months and bounced off it twice. Since the bears also failed to overcome the range of 1.3600-1.3666, which was also worked out several times in recent months, it turns out that the pair has been in a clear side channel for more than six months. Therefore, we have the right to expect a movement to its upper limit now. In addition, most technical and fundamental factors continue to indicate the continuation of the global upward trend. Thus, in the longer term, we continue to expect the pair to grow above 1.4240.

Meanwhile, yesterday, the evacuation of the British military from Afghanistan, where the power of the terrorist group "Taliban" was established, was officially completed. The US military also left the territory of Afghanistan, but not all Afghans who wanted to do this left it. Recall that after the Taliban came to power and the American and British authorities announced the withdrawal of their troops, many Afghans also wanted to leave the country for fear of reprisals for cooperation with foreign military personnel, which in turn fought against the Taliban. In total, more than 70 thousand citizens managed to leave Afghanistan, but this is not everyone who wants to escape from the country. The British authorities, in particular Dominic Raab, have already stated that the new government of Afghanistan should ensure safe and unhindered travel abroad for everyone. Otherwise, London may impose sanctions against Kabul and the new regime. London also said that it is ready to cooperate with Russia and China on this issue. It is unknown whether the new Afghan authorities will continue to allow their citizens to leave the country, but there are reasons to assume that they will not. Thus, the geopolitical conflict between Kabul and the West with Europe is just beginning. Recall that the US currency may start to rise in price again with any aggravation since many traders and investors use it as a "reserve currency." However, so far, no reports of illegal actions inside Afghanistan have been reported.

Meanwhile, the British currency continues to creep up after Jerome Powell frankly disappointed dollar bulls last Friday. However, it is very difficult to say that the pound is growing fast or strongly. Instead, we can say that the pair is "crawling" away from its local lows. So far, it is also impossible to say that a new upward trend has begun since both channels of linear regression are still directed downwards. The technical picture is the same as in the case of the euro/dollar pair. If an upward trend has started, it can transform into a continuation of the downward trend at the very beginning and any moment. Thus, it would be best if you were careful with long-term and medium-term purchases. 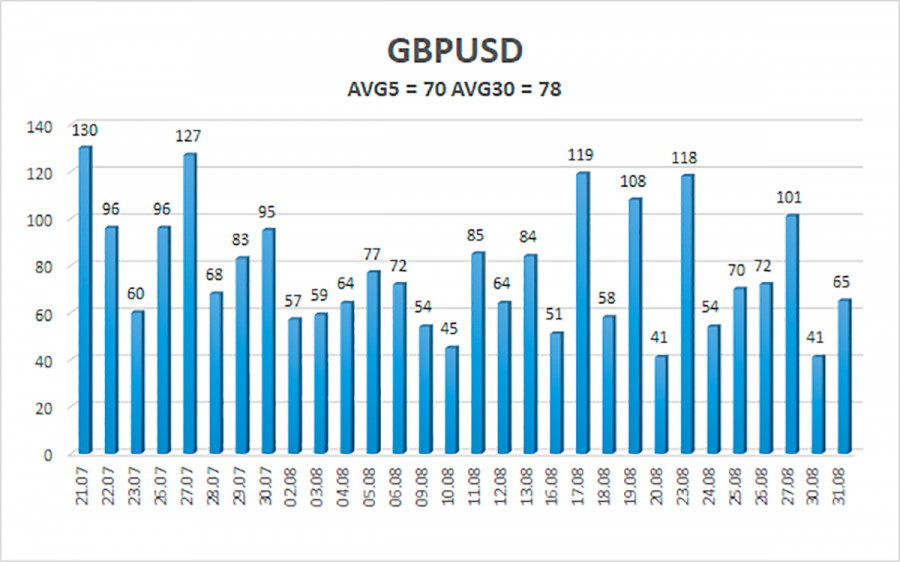 The average volatility of the GBP/USD pair is currently 70 points per day. For the pound/dollar pair, this value is "medium-weak." On Wednesday, September 1, we expect movement inside the channel, limited by the levels of 1.3684 and 1.3823. A reversal of the Heiken Ashi indicator upwards will signal a possible resumption of the upward movement.

Interesting? Write a comment below.
 Overview of the GBP/USD pair. September 1. The UK has completed the evacuation of military personnel from Afghanistan and
Forward 
Backward 