Trading plan for the GBP/USD pair for the week of August 23-27. New COT (Commitments of Traders) report. The pound is in 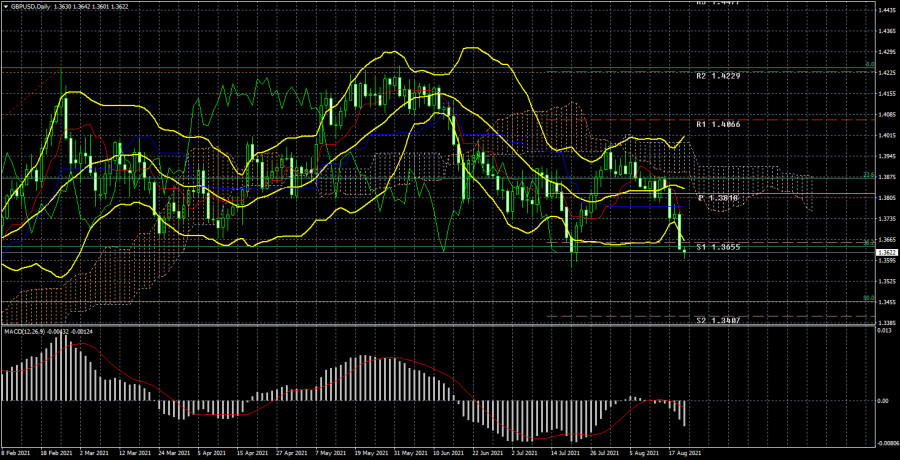 The GBP/USD currency pair has fallen by 257 points this week. Thus, its downward movement can be called strong, unlike the EUR/USD pair. At the moment, the downward trend continues, although a couple of weeks ago, everything looked as if a new upward trend had begun, which we have already talked about many times. However, the pound unexpectedly resumed its decline for many and is currently one step away from updating its six-month lows. Recall that in the long term, the global upward trend remains. And even the entire decline, which began on June 1, does not break this trend yet and does not cancel it. The entire downward movement is still just a round of correction against the upward trend, the total length of which is 2,800 points.

Meanwhile, the length of the last round of correction is only 640 points. It is not even 23.6%, according to Fibonacci. Thus, in the long term, we still expect the resumption of the upward trend. However, we would like to clarify that such a weak correction can provoke more powerful sales of the British currency. Still, if you look at the weekly or monthly timeframe, you can hardly expect that the upward movement will last for several years in a row, even without corrections. We expected that the Fed's monetary policy would continue to put pressure on the US currency. However, in practice, it turns out that the Fed may begin to curtail the quantitative stimulus program in the coming months, which leads to new purchases by the US currency markets. Thus, the general conclusion on the technical picture is as follows: we continue to wait for the resumption of the upward trend. However, the downward trend remains, so we should trade down. 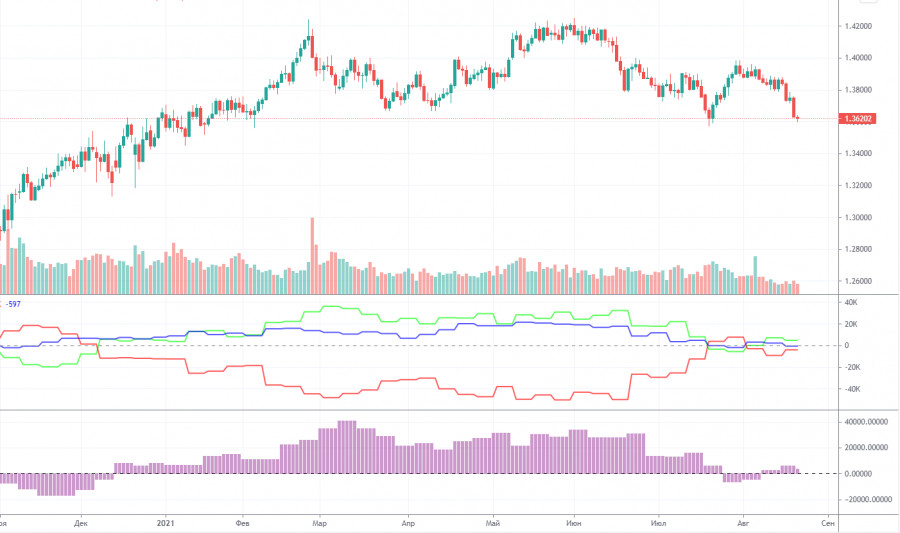 During the last reporting week (August 10-16), the GBP/USD pair did not lose or gain a single point. Moreover, if you look at the illustration above, it is visible that there is no downward trend at this time. There is a correction, and the correction ends sooner or later. According to the latest COT reports, the major players were not too active but still reduced their net position (the green line of the first indicator). And commercial traders, on the contrary, increased it. It suggests that the upward trend is coming to an end. However, at the same time, the data from the COT reports on the pound is very inaccurate since, when the pound was growing by those 2800 points, which we have already mentioned, professional traders did not always increase longs. Based on this fact, we concluded that the Fed's injection of trillions of dollars into the US economy has a greater impact on the British currency exchange rate, which banally inflates the money supply and provokes an increase in inflation.

Moreover, in the last few weeks, a group of "Non-commercial" traders has been increasing purchase contracts (the green line is growing, the second indicator is growing). Thus, there is again an increase in the "bullish" mood among the major players. Consequently, the pound may start to rise in price again. During the reporting week, the changes were minimal. In total, professional traders closed 2.7 thousand buy contracts and less than 0.5 thousand sell contracts. Thus, the net position decreased by 2.5 thousand. However, such changes are insignificant for the British currency. In general, now "Non-commercial" has almost a complete balance between purchases and sales of the pound.

During the current week, there were a lot of interesting macroeconomic reports in the UK. Moreover, in the first half of the week, the reports were very strong. They could and should have provoked the growth of the British currency. For example, in the UK, the unemployment rate has decreased, and wages have also increased. However, the pound began its fall on Monday and continued it all week. It turns out that the markets did not pay attention to the reports in favor of the British currency. However, they were happy to work out reports that were not in favor of the pound. Once again, we draw your attention to the fact that the euro has lost less than 100 points this week, and the pound – 240. Thus, at this time, the market sentiment against the British currency is more important than macroeconomic statistics.

1) The pound/dollar pair is again in a downward movement, which intensified last week. Since the price has now fallen below the critical line, it is simply impractical to consider purchases now. Therefore, to consider longs, you need to wait for a new price consolidation above the Kijun-sen line, after which the Senkou Span B line will be the first target.

2) Sellers have returned to the market and are putting pressure on the British currency again. At this time, the price has reached its previous local minimum, so a further decline is under great doubt – the price may rebound from this area. At the same time, since there is now a pronounced downward trend, trading should be conducted on a decline.

Interesting? Write a comment below.
 Trading plan for the GBP/USD pair for the week of August 23-27. New COT (Commitments of Traders) report. The pound is in
Forward 
Backward 