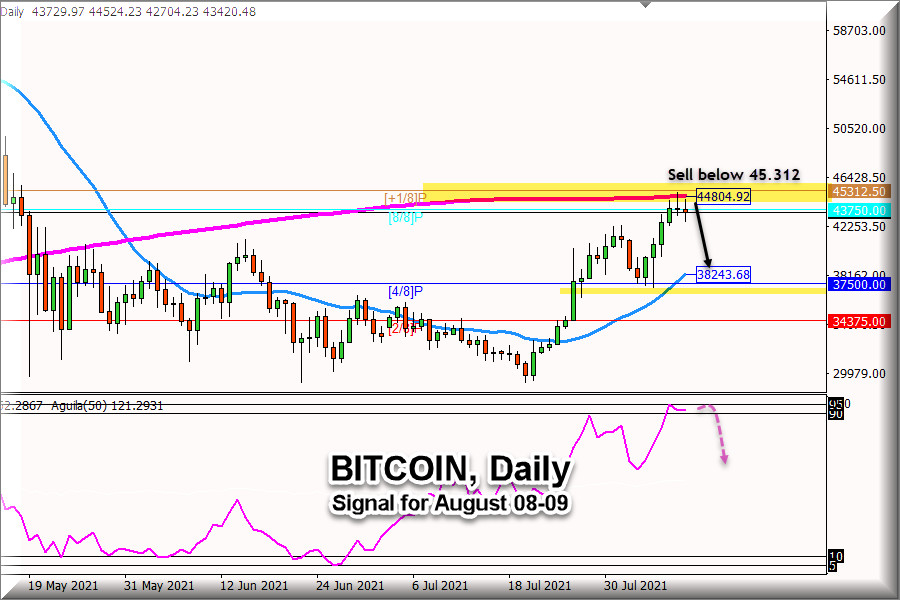 On daily charts, Bitcoin has reached the 200 EMA level around 45,153, this is the highest level for BTC in more than 2 months.

Bitcoin is facing strong resistance - the 200-day Exponential Moving Average. After BTC fell and consolidated below this EMA on May 19, it has been trading under heavy downward pressure and reached the lowest in the zone of 29,000.

Now, the key to keep in mind for a possible trend reversal is to wait for consolidation above the pivot point of 45,000, where the +1/8 Murray line and the 200 EMA converge.

A sharp breakout and a consolidation above $ 45,000 could give the bullish momentum to Fibonacci 61.8%, located at 51.096. This will be the last barrier to believe that the increase in the price of BTC is a technical correction.

If the price of BTC exceeds the 61.8% Fibonacci, the high of 64,700, it will be a sign of a long-term trend change. If BTC declines to the low of 29,147, it will be a clear signal of technical correction for a new bearish wave.

Some analysts believe that the inflation report could give bitcoin the boost it needs to reach the psychological 50,000 level. The markets forecast an increase of 0.5%.

Last month, BTC rose following the inflation report as investors decided it was a good investment to take refuge in BTC, thus achieving a boost above the 29,000 level.

After bitcoin made a triple bottom, this is a reversal pattern, it rose steadily from July 21 until now when it registered a maximum of 45,000, there is a possibility of a turn and change in trend because it is showing a signal of exhaustion.

This rise in bitcoin carries risks of becoming a temporary recovery bounce since the eagle indicator that measures market strength and volume, on daily charts, has reached an overbought zone and is giving a signal of an imminent downward correction in the next few days.