US stock market rises by 20% since start of year 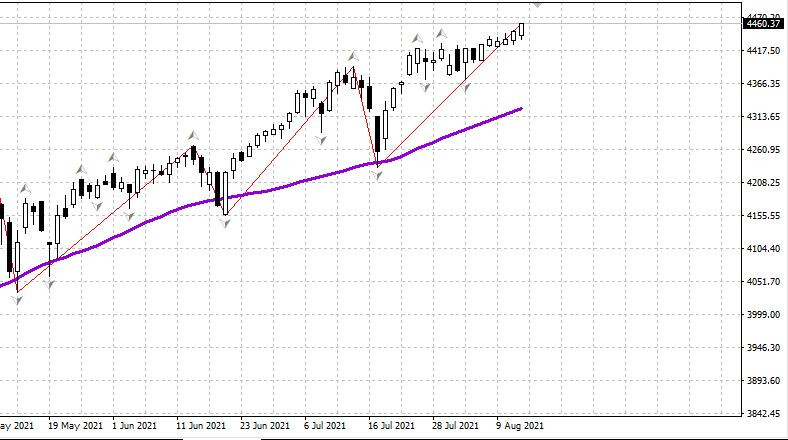 The third wave of the coronavirus hit new highs. There was 713,000 new cases worldwide yesterday. The US again recorded the highest number - 143,000 new cases. President Joe Biden called for accelerating the pace of vaccination among the most vulnerable groups of the population to avoid lockdown.

As for the commodity market, oil prices have been dropping for a while. Brent crude has not been able to consolidate above $71. It is declining today by about 1%, to $70.70. At the same time, global demand is at a high level. So, the drop in oil prices seems to be only a correction. Analysts attribute the decrease in oil prices to concerns about the surge in coronavirus cases in China.

Meanwhile, the EU economy is steadily recovering thanks to the high level of vaccination (on average, 60% of the population is vaccinated in Europe). Germany's GDP in July grew by 11.3% compared to last year. In June, the figure amounted to 10.7%. After a spike in demand in Europe, spot gas prices soared to $560 per thousand cubic meters. The market has not seen such prices since 2008.

The S&P 500 index is trading at 4.460. It is likely to stay in the range of 4.420-4.480. The US stock market received a new batch of inflation data yesterday, namely a report on wholesale price inflation. On Wednesday, another data showed a significant slowdown in retail inflation in the US in July. The figure decreased to 4.3% per annum from 5.8% in June. However, yesterday, the report showed that wholesale prices for July rose by 8% per annum above the target level of 6%. Nevertheless, Wall Street traders ignored this news. Additionally, the initial jobless claims report was released yesterday. The reading remained unchanged, coming in at 375,000. The number of Americans receiving unemployment benefits for a long time decreased by 110,000 to 2.86 million, which was bullish for the stock market.

The US real estate market continues to boom. Demand exceeds supply. As a result, house prices increased on average by 22% compared to last year at the end of the 2nd quarter. After a sharp rise in prices, demand has already begun to decline but prices are still growing according to new data on the real estate market.

USDX is trading at 92.95. It is likely to remain in the range of 92.60–93.20. Technical indicators signal a significant increase of the US dollar index. However, as we know, the US dollar did not receive support either from the Fed or from inflation data. On the contrary, the news was rather negative for the Us dollar. this is why a pullback and consolidation is possible.

The USD/CAD pair is trading at 1.2520. It is likely to fluctuate in the range of 1.2480-1.2560. The US dollar is unlikely to strengthen against the loonie despite the relative weakness of oil prices in recent days.

Currently, we should monitor how trading is unfolding at the end of the week. Investors are anticipating the correction in the US stock market.

Interesting? Write a comment below.
 US stock market rises by 20% since start of year
Forward 
Backward 