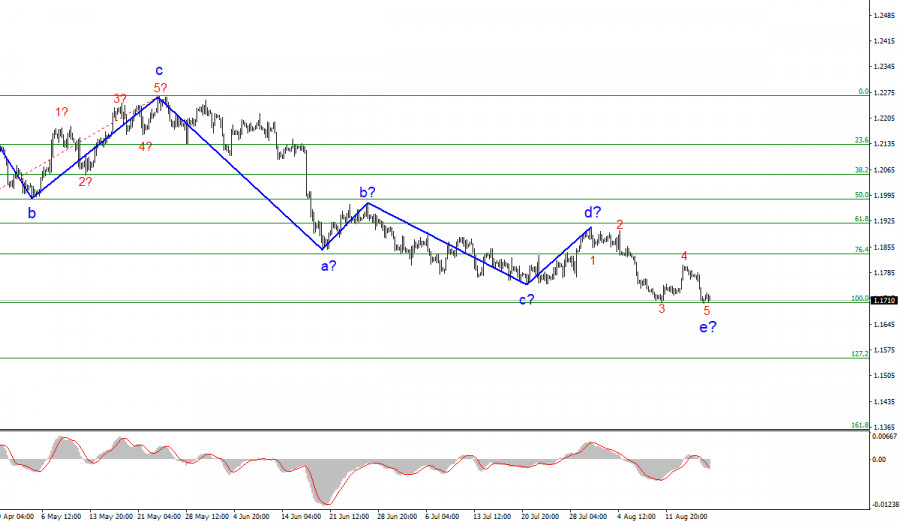 The wave counting of the 4-hour chart for the Euro/Dollar instrument remains unchanged for the time being. The decline in quotes yesterday by 60 basis points allowed the expected wave e to take a five-wave form. However, an unsuccessful attempt to break through the 100.0% Fibonacci level indicates that the instrument is ready to build a new upward wave. It is very confusing that the second unsuccessful attempt to break through 100.0% did not lead to a rapid exit of quotes from the reached lows. This may mean that on the third or fourth attempt, the instrument will still break through the 1.1704 mark, which will lead to an even greater complication of the downward trend section, which is long overdue for completion. Thus, in the near future, the instrument may still move to the construction of a new upward trend section. So, for the time being, I am waiting for the instrument to move to the construction of a new upward trend section and I consider this option to be the most likely at this time. At the same time, a strong news background for the US currency may lead to a breakout of the 1.1704 mark and complicate the downward set of waves.

The news background for the Euro/Dollar instrument was weak on Wednesday. For the second day in a row, European reports are as neutral as possible, which the markets continue to ignore. Yesterday, the GDP report was 2.0% QoQ, which coincided 100% with the expectations of the markets, and today the inflation report for July was 2.2% YoY, which also coincided 100% with market expectations, and at the same time with the value of June. Thus, the two most important indicators of the EU economy showed no changes after a month. And the markets did not consider it necessary to win back such boring reports. Jerome Powell also gave a speech last night. However, it was not really a speech, but rather an online conference with representatives of the US education sector. No important topics were touched upon during the video conversations, so this event also passed by the markets.

And as a result, the quotes of the instrument remain exactly in the place where they fell yesterday. Today, the minutes of the last Fed meeting will be released, which may at least slightly affect the mood of the markets. But I don't think the markets will pay attention to it. Usually, these minutes do not contain anything new – everything that is really important is announced after the Fed meeting. Most likely, the amplitude of today will remain minimal. To be more precise, there are 13 basis points. The markets are clearly confused right now. The wave counting speaks in favor of a new increase, but there are almost no purchases of the euro currency now. And at the same time, sellers do not have enough strength to break through the level of 1.1704. A stalemate.

Based on the analysis, I conclude that the construction of the downward trend section could have ended around the level of 1.1704, which is equal to 100.0% according to Fibonacci. Wave e has received a more pronounced five-wave internal structure, so the instrument may decline by another 50-60 points, however, according to the current wave count, the completion of the construction of the downward section is still approaching. An unsuccessful attempt to break through the 100.0% Fibonacci level will indirectly once again indicate the readiness of the markets to buy the euro currency. 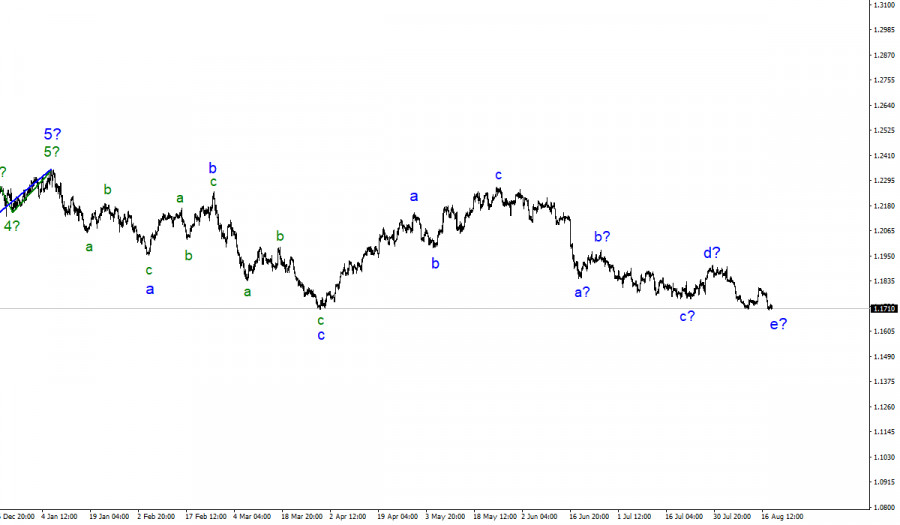 The wave counting of the higher scale looks quite convincing. We see three three-wave sections of the trend, which are approximately the same in size. However, the last section of the trend quite unexpectedly began to take a more complex form, but it can still end in the near future.