Analysis and trading recommendations for EUR/USD on September 27

Although volatility was quite good in the market last Friday, EUR / USD did not show any large movement. Thus, there was only one signal in the pair - to sell - and it coincided with the MACD line going down from zero. This provoked a 30-pip decline in euro, after which pressure on the currency eased.

Most likely, data on the German business environment hampered euro buyers from pushing growth in the pair, as two of the three indicators fell sharply. Afterwards, statements from Fed representatives fueled further demand for dollar, which accordingly retained EUR / USD in a bear market.

Today, there will be reports on lending in the Euro area, more specifically on the M3 aggregate of the money supply and the volume of lending in the private sector. If they turn out better than expected, EUR / USD could rise in price. There will also be a monthly report from the Bundesbank where economists will publish their forecasts, and statements from the ECB which may discuss potential actions on monetary policy. In the afternoon, a series of similar interviews and speeches are for Fed representatives such as John Williams and Lael Brainard. 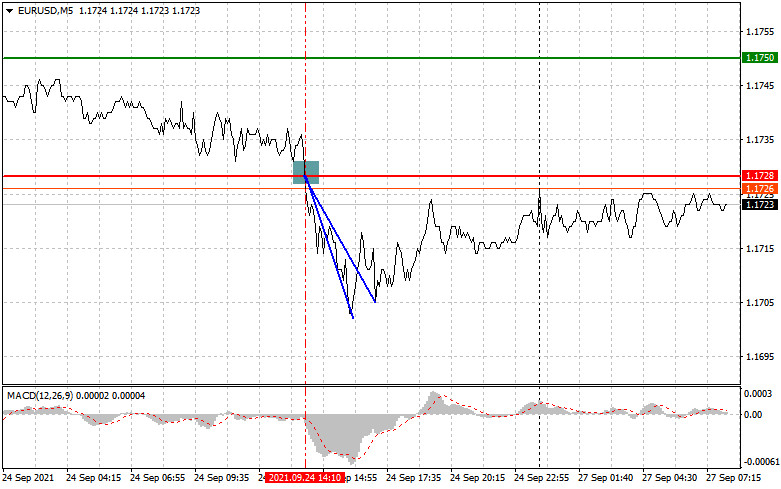 Open a long position when euro reaches 1.1730 (green line on the chart) and then take profit at the level of 1.1753. The pair may climb this week if data from the Euro area exceed expectations and if the ECB hints at potential early tapering of its support measures. But before buying, make sure that the MACD line is above zero, or is starting to rise from it.

Open a short position when euro reaches 1.1713 (red line on the chart) and then take profit at the level of 1.1684. A decline will occur if the Euro area reports weak economic data and if the ECB does not show any intention of cutting its support measures earlier than scheduled. But before selling, make sure that the MACD line is below zero, or is starting to move down from it. 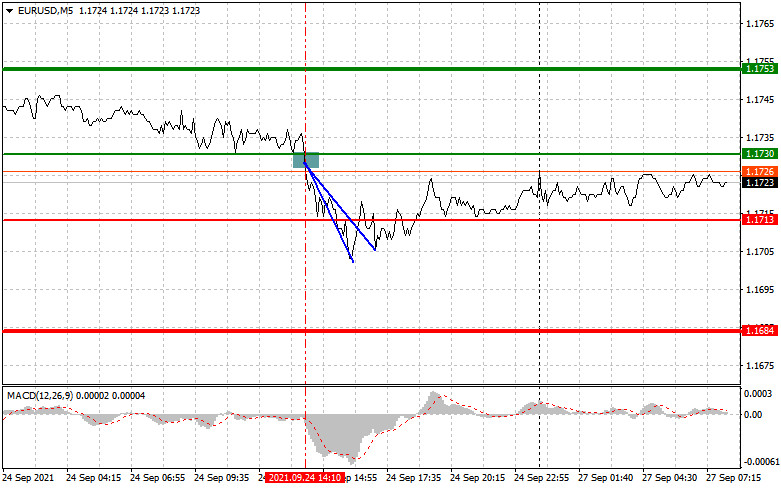