Analysis and trading recommendations for GBP/USD on September 20

GBP / USD fell strongly on Friday, which opened a good opportunity to take short positions. Sadly, the MACD line was far from zero, so investors had no choice but to ignore the signal.

Today though it is likely that the pair will drop in price as there are not much statistics expected to be published. Thus, it would be best to trade along the trend and bet on a decline.

By afternoon, the market should become calm because the absence of US statistics will force traders to take a wait and see attitude. Data on the housing market will be published, but it is unlikely to affect dollar significantly, although it may partially support it. 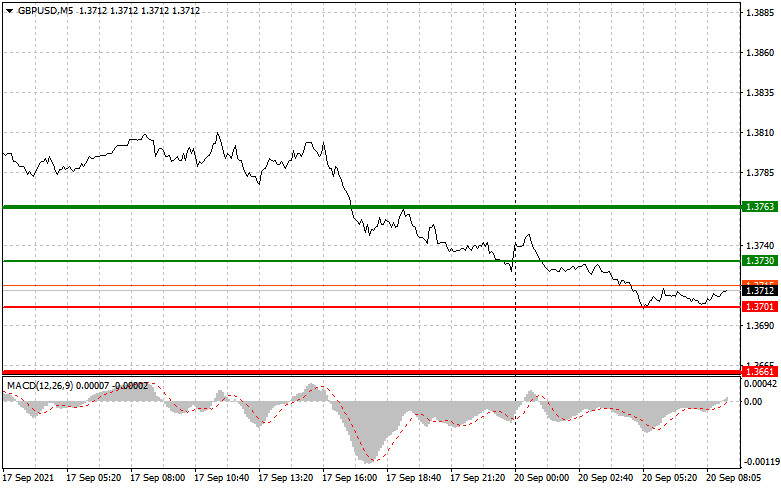 Open a long position when pound reaches 1.3730 (green line on the chart), and then take profit at the level of 1.3763 (thicker green line on the chart). But it is unlikely to see a huge growth today since there was a massive sell-off during the Asian session. In any case, before buying, make sure that the MACD line is above zero, or is starting to rise from it.

Open a short position when pound reaches 1.3701 (red line on the chart), and then take profit at the level of 1.3661. The pair may continue the downward trend that started last week. But before selling, make sure that the MACD line is below zero, or is starting to move down from it.