Analysis and trading signals for beginners. How to trade EUR/USD on September 2? Analysis of Wednesday trading. Getting 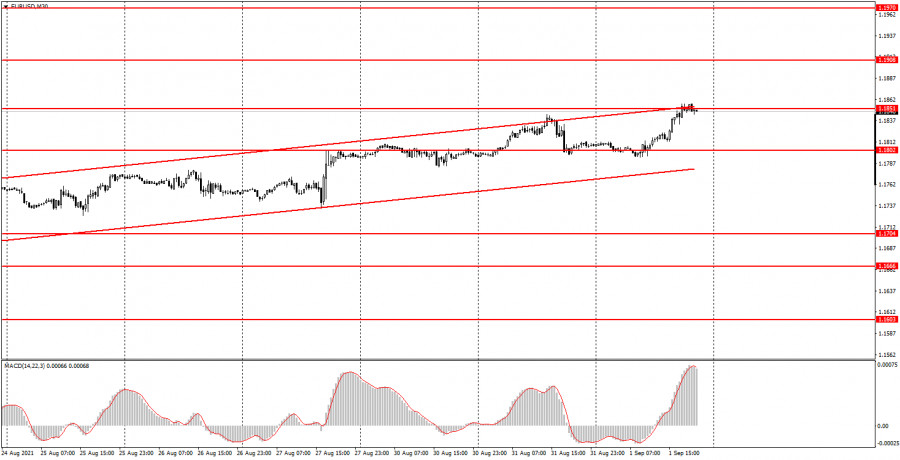 The EUR/USD pair resumed its decline on Wednesday after a pullback on Tuesday. An ascending channel has been formed, but we should warn you that the angle of its slope does not allow us to use the MACD indicator to generate buy signals. To put it simply, the upward movement was too weak just as the entire movement of the euro/dollar pair. The price has advanced to the level of 1.1851, as well as to the upper boundary of the channel. Therefore, a rebound from these levels and a slight drop in price to the level of 1.1802 is very likely. Thursday will be a very good day for the pair to move down. There was a lot of macroeconomic news on Wednesday. We can mention at least four reports. However, the European data was completely ignored by the markets. The first two ticks on the chart above represent the moment when reports on business activity and unemployment were published. In the US, the ADP report turned out to be weak which triggered a fall in the US dollar. The ISM index was almost neutral, so the markets showed no reaction to it as well. Thus, we can conclude that the upward movement on Wednesday was mainly caused by the ADP report. 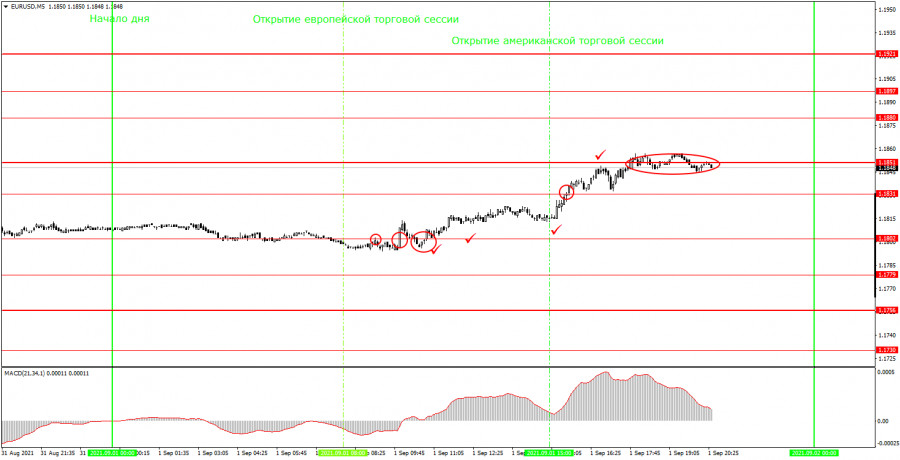 On the 5-minute time frame, you can clearly see that EUR/USD has been moving upwards almost all day long. However, if we divide 60 pips by 24 hours, we will get a very slow upward movement. In the European session, the pair gained only 10-20 pips. But the main movement happened in the American trading hours after the publication of the ADP report (third tick on the chart). Now let's take a closer look at all trading signals of the day. After three attempts, the pair managed to overcome the 1.1802 level, so novice traders had to open a buy trade at this point. First, the price rose to the level of 1.1831 and passed it straight away. Then it moved to the level of 1.1851 around which it finished its upward journey. Therefore, trading on Wednesday turned out to be as simple as possible since only one trade was opened. It was closed manually in the late afternoon with a profit of about 30-40 pips. It could have been closed by Take Profit as well.

On the 30-minute time frame, the EUR/USD pair continues to trade within an uptrend although it is very weak. Thus, we still do not recommend following buy signals from the MACD indicator and waiting for a more convincing trendline or a channel to form. On the 5-minute time frame, it is better to trade from the levels of 1.1802, 1.1831, 1.1851, 1.1880, and 1.1897. As usual, Take Profit should be set at 30-40 pips, while Stop Loss should be moved to breakeven as soon as the price passes 15 pips in the right direction. On the 5M chart, the target can be the nearest level if it is not too close or too far away. If it is, then you should act according to the situation. On Thursday, traders will have nothing to pay attention to in the European Union and the US. Several minor reports will be published in the US, but they are unlikely to have any impact on the course of trading. In addition, Atlanta Fed President Raphael Bostic will give a speech on Thursday evening. However, beginners will have to leave the market by that time. Friday will be a more important day as the NonFarm Payrolls report will be published in the US.

Red lines are channels or trendlines that display the current trend and show in which direction it is better to trade now.

The MACD indicator (14, 22, and 3) consists of a histogram and a signal line. When they cross, this is a signal to enter the market. It is recommended to use this indicator in combination with trend patterns (channels and trendlines).

Important announcements and economic reports that you can always find on the economic calendar can seriously influence the trajectory of a currency pair. Therefore, at the time of their release, we recommend trading as carefully as possible or exit the market in order to avoid sharp price fluctuations.

Interesting? Write a comment below.
 Analysis and trading signals for beginners. How to trade EUR/USD on September 2? Analysis of Wednesday trading. Getting
Forward 
Backward 