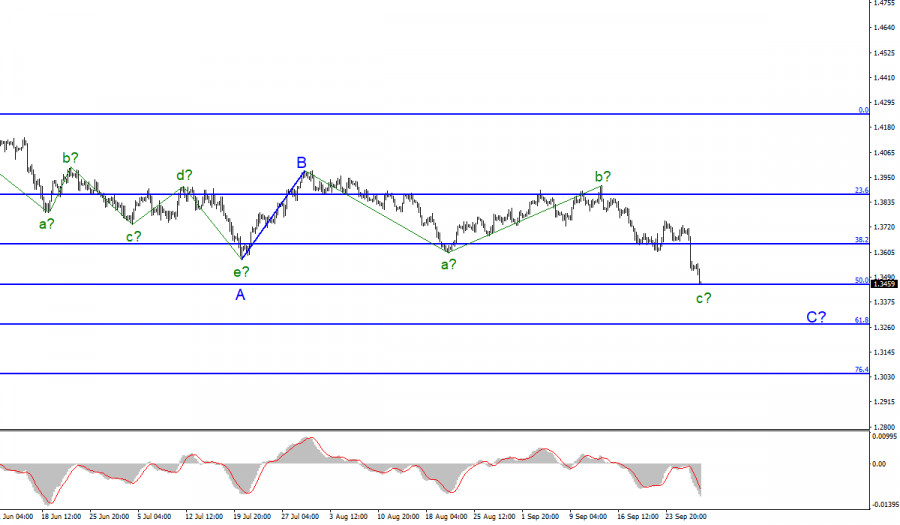 The wave markup for the pound/dollar pair went through certain adjustments. The pair declined by 155 pips points yesterday. It also made a successful attempt to break below the low of the previous a and e waves. Thus, it is necessary to make adjustments to the current wave pattern. Now, it has taken the form of a downward trend section, which can also be a correction. This assumption may be true as the internal structure of the proposed wave A is not an impulsive one. In addition, the third wave of this trend is not impulsive as well. However, given the length of each wave in the composition of C, the full structure is likely to be quite long. If this assumption is correct, then the pound sterling is likely to extend losses, decreasing to the nearest target level located near 61.8%. The wave markings of the euro/dollar and pound/dollar pairs undertook almost the same changes. Now, they look quite similar. In both cases, the decline is expected to continue.

The pound/dollar pair decreased by 165 pips on Tuesday and about 100 more on Wednesday. At the same time, the euro/dollar pair is declining slowly, while the pound/dollar pair is plunging. I believe that the main reason for such a sharp fall is the fuel crisis. There were simply no other reasons for its decline by 265 pips in two days. Now, the trajectory of the pound sterling may depend on how quickly the UK government will be able to ease panic among citizens and deliver gasoline from factories and storage facilities to gas stations. Importantly, this problem arose at the beginning of the year when the British Industrial Truck Association stated that at least 100,000 truck drivers would not be able to enough to ensure the operation of all supply chains without disruptions.

Nine months have passed since then. Now, retail chains, supermarkets, and the food industry representatives note that there are still not enough 100 truckers in the country. So, they simply cannot deliver their products to stores or warehouses. Businesses and households also declare that there are other problems apart from a shortage of lorry drives. Some industries lack employees of similar professions who usually came to work in the UK from the European Union. Thus, many agencies warn that people and businesses should be braced for the fact that the fuel crisis may last until Christmas or longer. The UK government has promised to solve the problem with the shortage of drivers and the lack of gasoline at gas stations. Judging by the fact that the pound sterling continues to decline, these problems have not been solved and the tension remains.

The wave pattern has changed dramatically after yesterday's decline. Now, the wave pattern shows a downward movement, not an impulsive one. Therefore, it is recommended to open short positions on the pound sterling after each MACD signal based on the construction of wave C. It may get quite long with targets located near 1.3456, which is 50.0% Fibonacci. 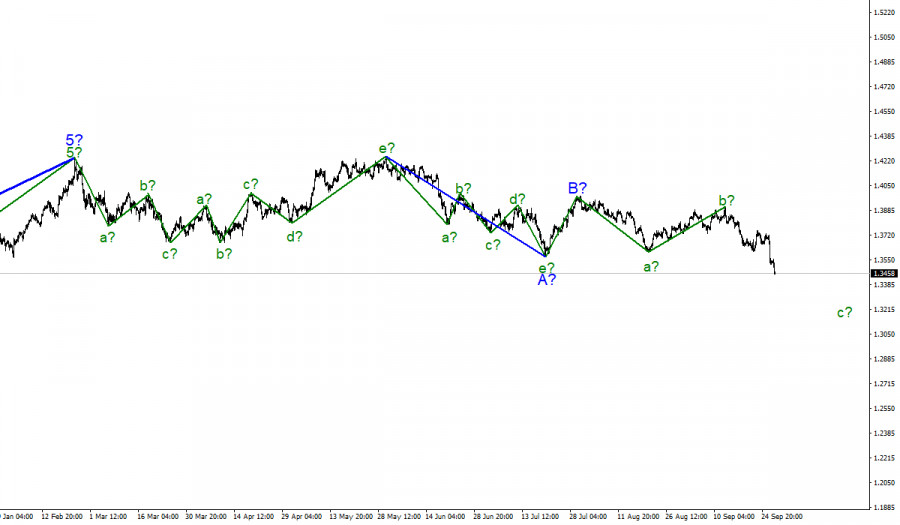