Bitcoin crashed after reaching the 52,956.47 level in the early morning. The price plunged after El Salvador adopted Bitcoin as a legal currency. BTC/USD went down by 9.33% in the last 24 hours and by 0.78% in the last 7 days.

It has dropped by 18.99% from 52,956 today's high to 42,900 today's low. Bitcoin is traded at 47,020 at the time of writing and it seems undecided after its massive sell-off. Technically, it is still bullish despite the aggressive sell-off, but we'll have to wait for a fresh upside signal before going long. 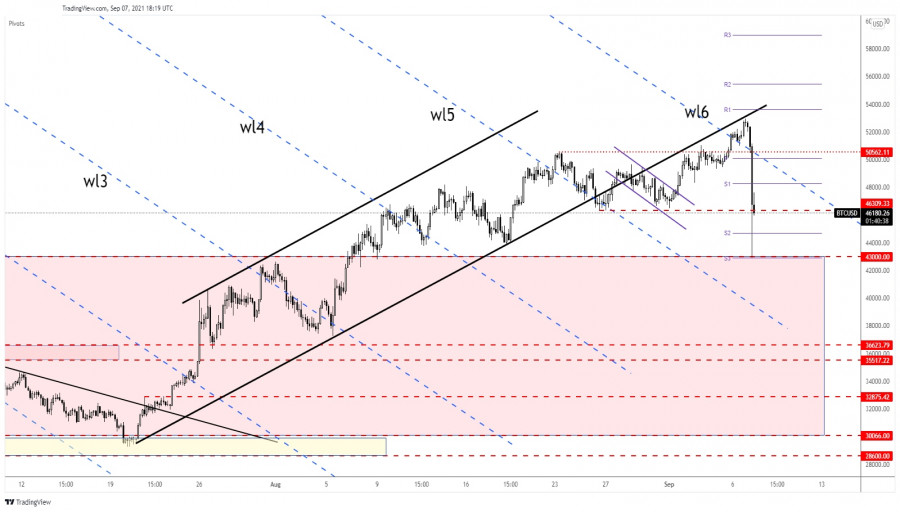 BTC/USD registered an amazing sell-off after failing to reach and retest the uptrend line. The pressure is high as long as it stays below the sixth warning line (wl6) of a former descending pitchfork.

Bitcoin erased the latest gains and now it tries to stabilize above the 46,309 level, former low. Technically, it has found support around the 43,000 psychological level and the weekly S3 (42,910).

Stabilizing above 46,309 and making a temporary consolidation could signal a potential rebound. In the short term, a potential decline is in cards. Closing under 46,309 could signal further decline at least until the S2 (44,698).

Bitcoin could drop deeper as long as it stays under the weekly S1 (48,272) and below the wl6. Only a strong consolidation or a major bullish pattern could signal a new leg higher.