Judging by the movements in the foreign exchange market, worries over the EU energy crisis have subsided. At least the mass media no longer reveal new shocking details. Power prices seem to have stabilized. Although they still remain extremely high. EU governments declared the allocation of additional funds to support businesses and consumers. Despite the fact that the pound sterling shows growth, it is extremely limited. Its movements are quite similar to ones that happened on September 16 - 17. Back then, the pound sterling undertook modest and sluggish attempts to grow, followed by a drastic decline. Indeed, there is no extremely negative news, but there is also no positive news. For this reason, many traders are convinced of the inevitability of the prolonged crisis and disastrous consequences for the economy. The British currency is unable to rise amid these fears. Today, the pound sterling is highly likely to stay flat. Yet, there might be insignificant growth. Besides, over the previous few trading days, the single currency has plunged considerably. This scenario is likely to come true only if there are no new negative reports on the European energy market.

The dollar/pound pair fell by 160 pips during the inertial movement in just two trading days. So, there was an increase in the volume of long positions on the US dollar in terms of a correction as of August 23-September 3.

The technical indicator RSI entered the oversold zone after a sharp price change. It is below the 30 line. Shortly after, there was a slowdown in the downward movement. The 1.3640 level acts as a pivot point. From this level, the pair rebounded.

On the daily chart, the US dollar rose by about 87% thanks to the correction.

Now, the pound sterling is oversold. So, it may rebound. A rise in the volume of short positions is expected if the quote consolidates below 1.1700 on the H4 chart.

As for complex indicator analysis, technical indicators are signaling to buy the pair in the short term amid a rebound and sell it on the intraday chart due to a downward cycle. 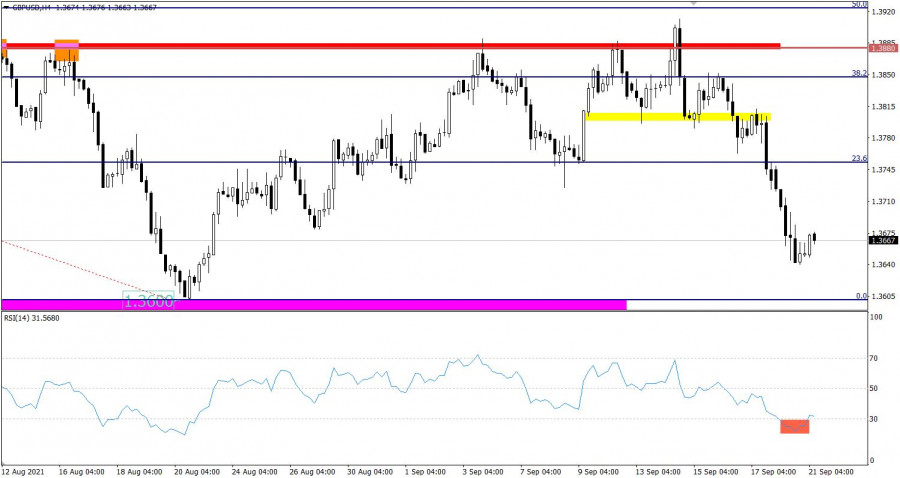