The crypto market is going through hard times. Yet, despite headwinds, the altcoin remains resilient. Over the past month, more than $1 billion worth of coins has been burned on the ETH network. The successful implementation of the London hard fork marked a new era of cryptocurrency. It boosted institutionalization and reduced consumption. In the future, these positive changes are likely to continue. Even despite another whiplash from China's government and the termination of one of the world's largest mining pools, ETH continues to develop. Besides, another update on the Altair network was announced. It will take place on October 27.

As part of the update, it is planned to create a platform for the full implementation of broad solutions of the second version of the ether protocol into the main network. London hard fork was just a first step to the transition to 2.0. The Altair update will become a pioneer in creating core components that connect ETH and ETH 2.0. Besides, a gradual transition to the consensus mechanism is planned and support for lightweight clients will be added. Developers also intend to simplify monitoring of the state of the central chain and fix problems with incentives for validators. However, Altair's main task will be to test the main network before implementing larger solutions during the transition to version 2.0.

Despite the official shutdown of the Park Pool mining pool, the Ethereum hashrate remains at a high level, although it has sunk by 1.35% over the past day. The price of the coin has also hardly changed in 24 hours. The digital asset is holding near the key resistance level of $2,900. The trading volume declined to $20 billion. Network activity hit a two-week low. On horizontal charts, crypto assets are trying to consolidate but the current trading volumes are low. So, they are now unable to rise. On the 1H chart, the price managed to make a bullish breakout of the bearish triangle of September 27 and successfully consolidated above it. Technical indicators are also turning up. The MACD leaves the red zone and crosses the zero mark. The stochastic is moving near 75. 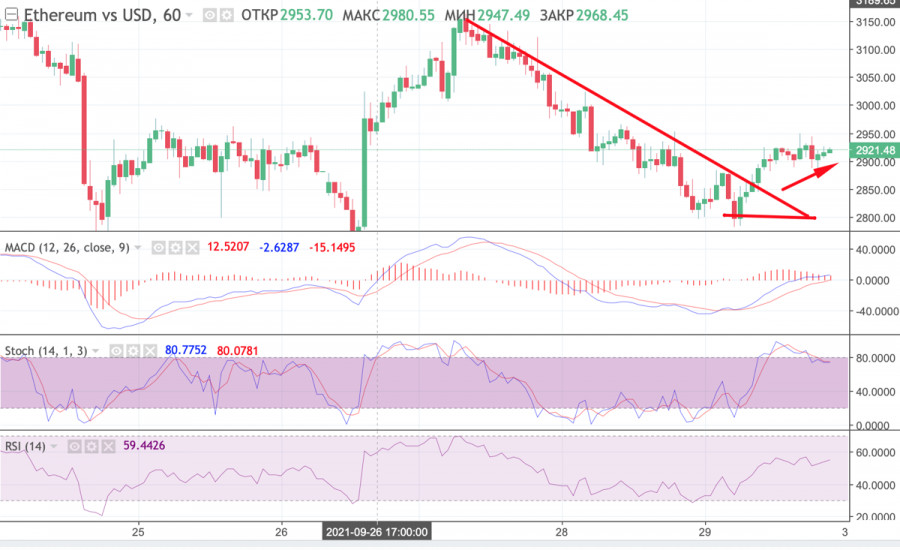 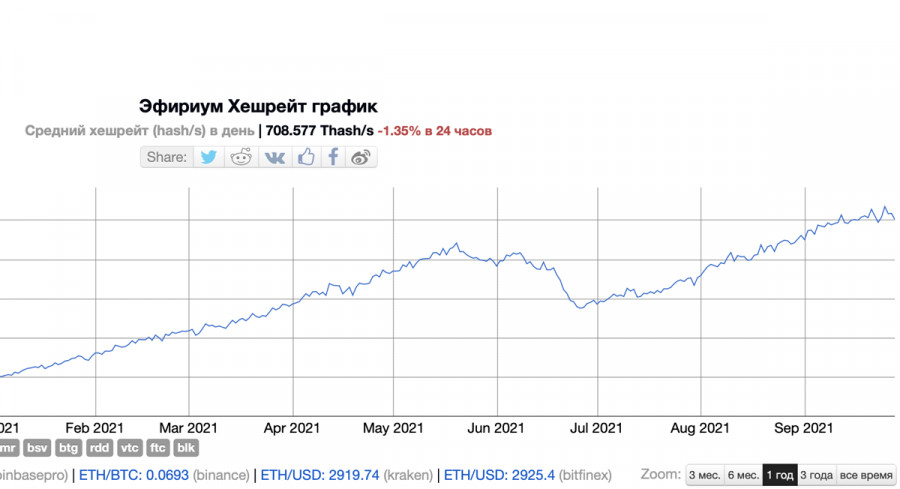 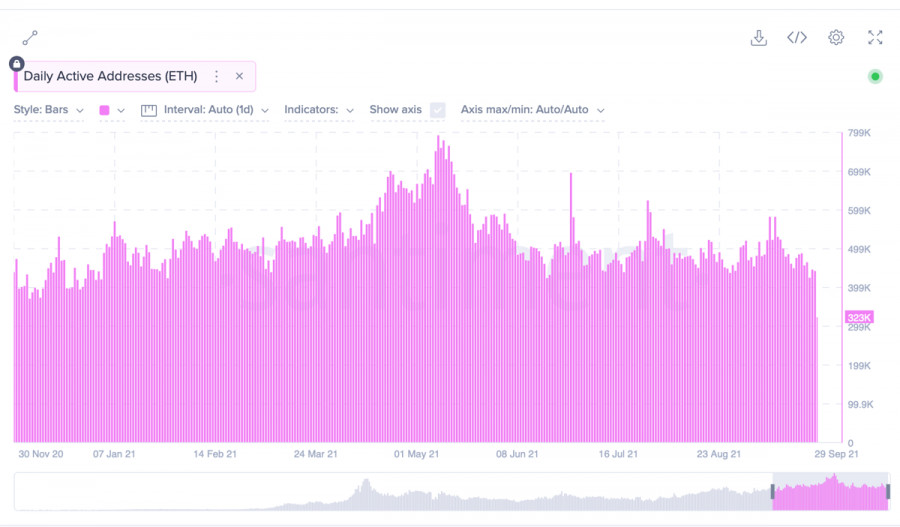 On the 4H chart, the outlook is even more optimistic amid the breakout of the bearish pattern from September 16. A higher timeframe confirms the bullish trend on the 1H chart. The MACD will soon complete the formation of a bullish intersection. The stochastic is moving to the 50 mark. The RSI indicator is also moving along the 50 mark, which indicates the formation of a bullish breakout of $3,00. However, it is necessary to see a bullish trend on the daily chart. 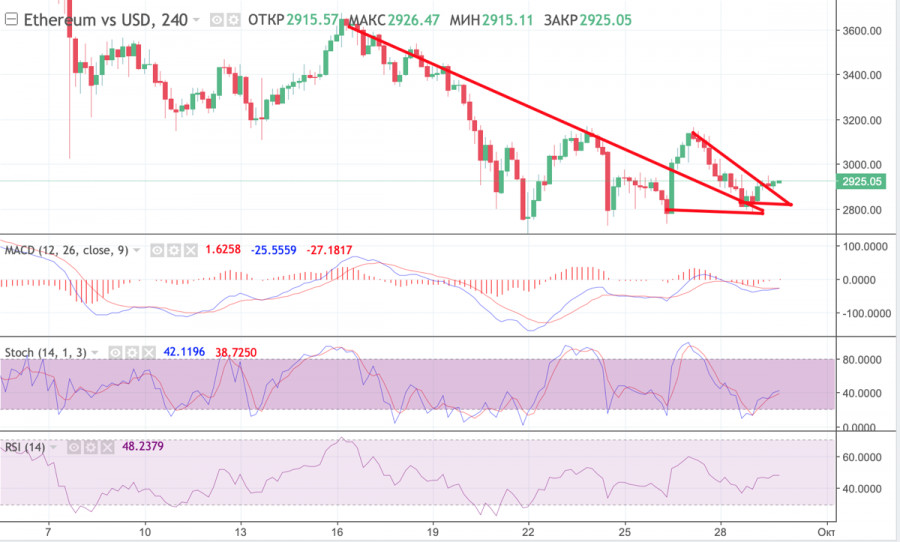 On the daily chart, the formation of an upward movement is seen even stronger amid explicit signals of technical indicators. At the same time, the cryptocurrency is likely to break above the resistance level notched on September 7. Ether needs to grow above $2,800. The RSI indicator moves along the 45 mark while the stochastic forms a bullish intersection. At the same time, the MACD is still moving under the zero mark in the sideways channel. If bulls gain momentum, they may push ether above $2,900. It may even test $3,000 before the end of September. If so, it may enter the consolidation phase. Growth of on-chain activity will begin before the update that expands the capabilities of the cryptocurrency. 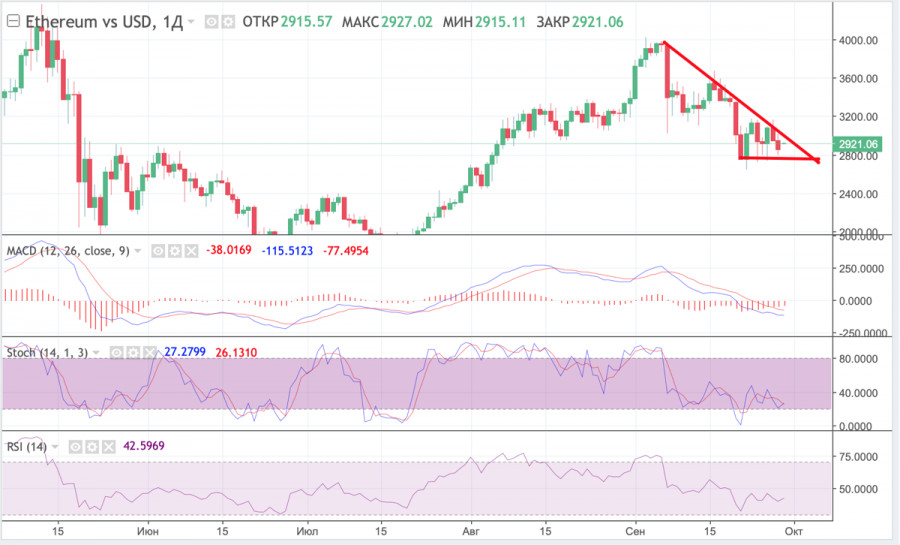