EUR/USD: plan for the European session on September 1. COT reports. Euro updated another weekly high, but could not grab

Several signals to enter the market were formed yesterday. Let's take a look at the 5 minute chart and break down the entry points. Even in the first half of the day after reports on the eurozone were released, and there were quite a lot of them, the euro tried to break above the resistance of 1.1831 and all this led to a false breakout and a sell signal. But if during the European session we did not get a strong downward movement, then a similar situation after a breakout and a return under the level of 1.1831 in the afternoon had resulted in creating another entry point into short positions and to a larger fall to the 1.1809 area. Making it possible to take about 30 points from the market - almost all intraday volatility.

Today is quite an interesting day from the point of view of European fundamental statistics. The bulls can count on the pair's growth, and good data on retail sales in Germany, as well as a series of reports on PMIs in the manufacturing sector of the eurozone countries, will provide help. Towards the middle of the day, we will get acquainted with the unemployment rate in the eurozone, which may drop to 7.6%. But since this figure is for July, it is unlikely that it will significantly affect the market. Against this background, the only thing left for the bulls is to follow the level of 1.1792 and count on the breakthrough of 1.1820. In case the euro falls in the first half of the day, only a false breakout in the 1.1792 area can create a good signal to open long positions in continuation of the upward trend with the key goal of an exit at 1.1820. A more important task is a breakthrough and reverse test from top to bottom of this level, which also forms a buy signal in hopes of a further recovery to 1.1844, where I recommend taking profits. The succeeding target will be the area of 1.1870, but it will only be possible to reach this level if the German retail sales reports turns out to be strong and the US labor market report disappoints, which will be discussed in more detail in the forecast for the second half of the day. In case the bulls are not active in the 1.1792 area, it is possible to open long positions in EUR/USD immediately for a rebound from the support at 1.1769, or even lower - from the level of 1.1747, counting on an upward correction of 15-20 points within the day. 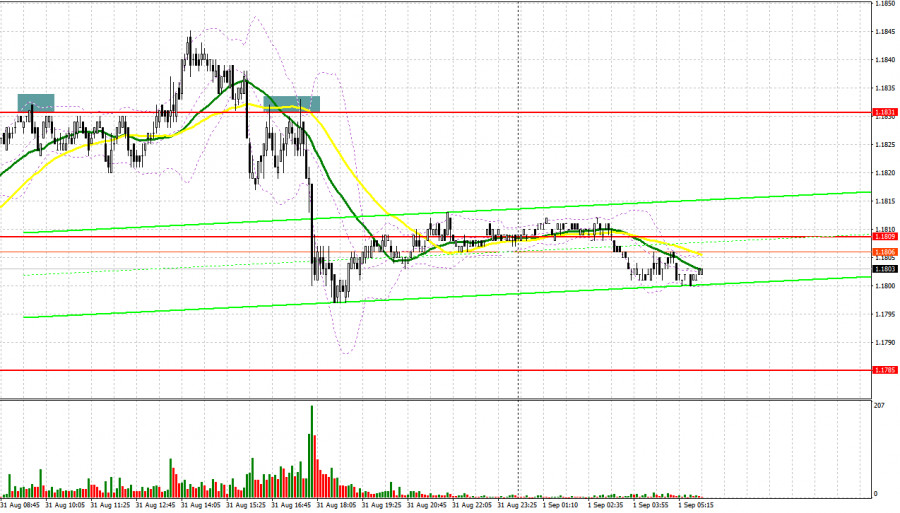 The bears may try to regain control of the market at the very beginning of this month, so it is very important how they show themselves today in the 1.1820 resistance area and what kind of fundamental data will be released for the eurozone. The initial task during the European session is to regain control of the level of 1.1792, and given that trading is being conducted below the moving averages, it is quite possible to do this. Only a breakthrough and a reverse test of this level will return the pressure to the pair and generate a signal to sell the euro in order to renew the 1.1769 low. The succeeding target will be the area of 1.1747, but we can only count on such a powerful downward movement today if we receive weak fundamental statistics on Germany and the eurozone. In case EUR/USD grows further during the European session, only a false breakout at the level of 1.1820 can create the first signal to open short positions in hopes of restoring the bear market. If there is no activity there, it is best to postpone short positions until the test of the larger resistance at 1.1844, and I recommend selling the pair immediately on a rebound counting on a downward correction of 15-20 points only from a new weekly high of 1.1870. 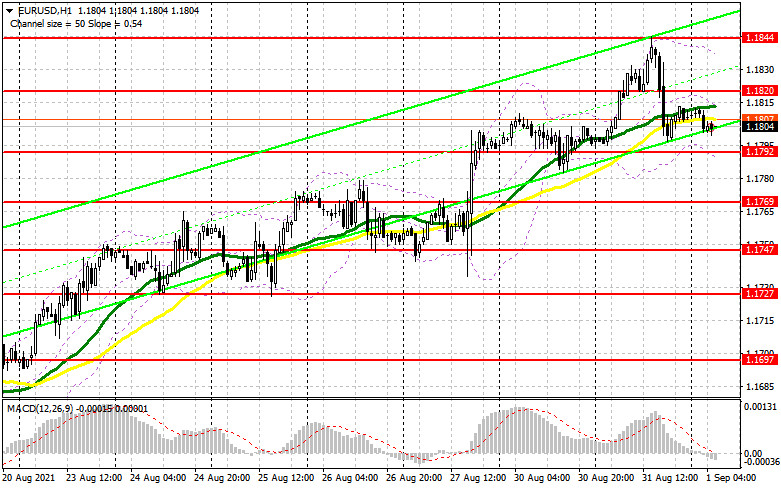 Trading is carried out below 30 and 50 moving averages, which indicates the likelihood of a downward correction in the euro.

Interesting? Write a comment below.
 but could not grab, EUR/USD: plan for the European session on September 1. COT reports. Euro updated another weekly high
Forward 
Backward 