EUR/USD: plan for the European session on September 20. COT reports. Euro rapidly losing ground against US dollar. Aim for

Last Friday, the breakthrough of another weekly low triggered a sharp sell-off of the European currency further along the downward trend formed in early September this year. Expectations of changes in the Federal Reserve's monetary policy are boosting demand for the US dollar, which may show a larger upward trend in mid-fall this year.

No important news this morning, but attention will be drawn to the report on the German producer price index, whose growth in August, above economists' forecasts, may help stop the downward trend in the European currency. If the data turns out to be worse than economists' forecasts, it is unlikely that the EUR/USD bulls will have enough strength to defend the 1.1709 support. Forming a false breakout there generates a signal to open long positions against the trend in hopes of an upward correction to the first resistance of 1.1733. A breakthrough of this range and its reverse test from top to bottom creates a good entry point into long positions in continuation of the euro's growth with the renewal of the 1.1756 high, where I recommend taking profits. Moving averages are just below this area, which will limit the pair's upward potential. In case EUR/USD falls in the first half of the day and traders are not active around 1.1709, you can open long positions in EUR/USD after a false breakout in the 1.1686 area, but I advise you to buy EUR/USD immediately on a rebound only at the 1.1666 low, or even lower - in the area of 1.1628 based on an upward correction of 15-20 points within the day. 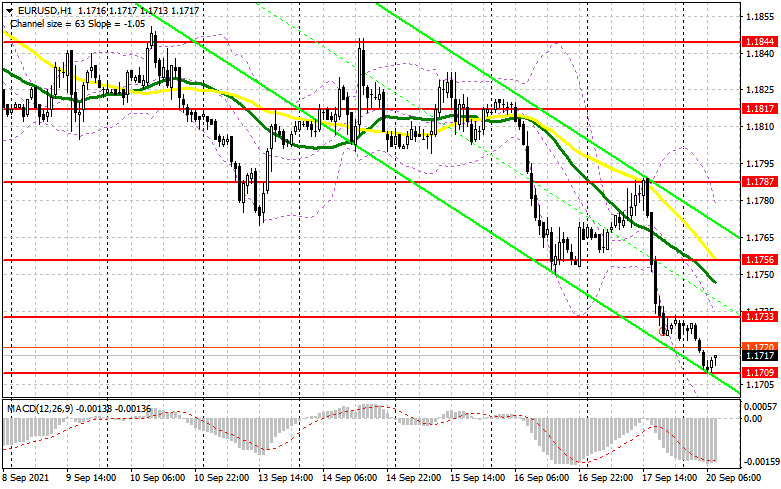 Bears will try to control the market and be active in every possible way during an upward correction in the pair. Fundamental data on Germany and the speech of European Central Bank executive board member Isabel Schnabel are unlikely to seriously harm the downward trend. Weak inflation data, on the contrary, will help the bears to protect the resistance at 1.1733. But only a false breakout on it can lead to forming the first entry point to short positions in hopes that the pair would fall within the day. The next target will be a breakthrough and consolidation below the support at 1.1709. A reverse test of this level from the bottom up will return pressure to the pair and create another signal to sell the euro with a renewal of the 1.1686 low. The next target will be the area of 1.1666, where I recommend taking profits. If EUR/USD rises in the first half of the day and there are no bears at 1.1733, it is best to postpone selling until the test of the larger resistance at 1.1756. I advise you to sell the pair immediately on a rebound counting on a downward correction of 15-20 points only from a new high of 1.1787.

Trading is carried out below 30 and 50 moving averages, which indicates a further decline in the euro along the trend.