EUR/USD: plan for the European session on September 21. COT reports. Euro remains under pressure against the US dollar, although

The euro remains under pressure against the US dollar, although the bulls manage to recapture the 1.1702 low. There weren't many signals to enter the market yesterday. Even in my morning forecast, I drew attention to the 1.1709 level and advised you to make decisions on entering the market. Let's take a look at the 5 minute chart and see what happened. It can be clearly seen how good inflation data in Germany is supporting the euro, and the bulls are doing their best to prevent a breakthrough of 1.1709. After forming a false breakout, a long entry point was created, which pushed the pair to rise by 25 points in the afternoon. It was not possible to wait for another signal to buy EUR/USD during the US session from a false breakout in the 1.1702 area, since just a couple of points were not enough before the test of this level.

Before talking about the further prospects for the EUR/USD movement, let's see what happened in the futures market and how the Commitment of Traders positions have changed. The Commitment of Traders (COT) report for September 14 revealed that both long and short positions have decreased. All this is a consequence of the wait-and-see attitude of traders at the beginning of this fall, when the Federal Reserve may shed light on its further monetary policy. Much will now depend on how the US authorities solve the problem of the national debt limit, which is already putting pressure on stock markets returning demand for the US dollar, which harms risky assets. This week, the situation on this issue should somehow become clearer. The demand for risky assets is also limited due to the high likelihood of another wave of the spread of the coronavirus, and its new strain Delta. All this will force the European Central Bank to continue to adhere to a wait-and-see attitude and maintain a stimulating policy at current levels, which limits the upward potential of the EUR/USD pair. The COT report indicated that long non-commercial positions fell from 189,904 to 186,554, while short non-commercial positions fell from 163,596 to 158,749. By the end of the week, the total non-commercial net position slightly rose to 27,805 from the level of 26,308. The weekly closing price dropped from 1.1870 to 1.1809. 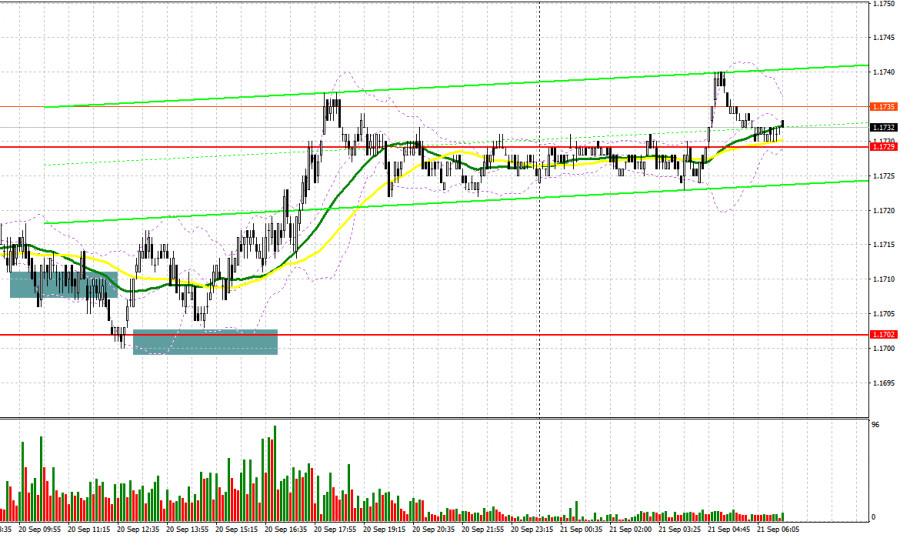 Today we do not have any important fundamental statistics for the eurozone countries, so in the first half of the day, the advantage that the bulls achieved in the Asian session may quickly dissolve in the face of tough demand for the US dollar. However, we can count on the pair's growth until the moment when the trade is carried out above the level of 1.1723, where the moving averages are. The initial target of the bulls for the first half of the day is a breakthrough of the 1.1756 level. Surpassing this area with a reverse test from top to bottom generates a signal to open long positions while expecting the euro to recover further and a continuation of the upward trend that we saw at the end of yesterday. In this case, the closest target will be the area of 1.1787. Its breakthrough with a similar consolidation creates another entry point for long positions, which will lead EUR/USD to new local levels: 1.1817 and 1.1844, where I recommend taking profits. If the pressure on the pair returns, long positions can be opened only if a false breakout is formed around 1.1723. I advise you to buy EUR/USD immediately on a rebound only after the first test of yesterday's low at 1.1702, or even lower - from the level of 1.1676, counting on an upward rebound of 15-20 points within the day. A renewal in this area will be evidence of a renewed bearish trend.

The bears have not shown much initiative yet, but the trend remains downward even in the context of the observed short-term upward correction. The lack of data on the euro area may gradually return the pressure on the euro, so it is better to stick to further selling the euro from major resistance levels. Forming a false breakout in the resistance area of 1.1756, where the upper border of the current downward channel passes, will be one of the first signals. This will provide an excellent entry point into short positions with the goal of falling towards the 1.1723 area, which was formed in today's Asian session. Only a breakthrough and a test of this area from the bottom up will increase the pressure on the pair and open the way to lows: 1.1702 and 1.1676, where I recommend taking profits. If the bears are not active in the 1.1756 area in the first half of the day, I advise you to open short positions only after forming a false breakout in the 1.1787 area. Selling EUR/USD immediately on a rebound is best only after testing the new local resistance at 1.1817, counting on a downward correction of 15-20 points. 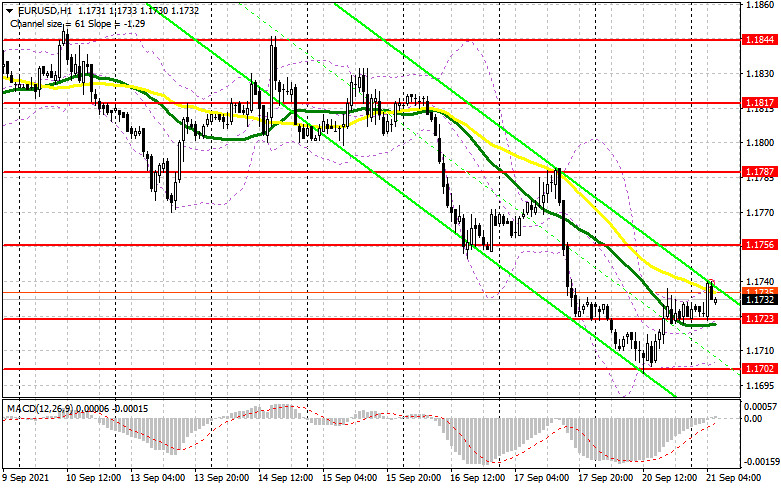 Trading is carried out above 30 and 50 moving averages, which indicates an attempt by the bulls to build an upward correction of the pair.

A breakthrough of the upper border of the indicator in the area of 1.1735 will lead to a new wave of euro growth. In case the pair falls, support will be provided by the lower border at 1.1702.

Interesting? Write a comment below.
 although, EUR/USD: plan for the European session on September 21. COT reports. Euro remains under pressure against the US dollar
Forward 
Backward 