EUR/USD: plan for the European session on September 22. COT reports. FOMC decision on key interest rate will be the key event

Yesterday was profitable enough for trading the European currency. One of the scenarios I described in my morning forecast worked out completely. There were also attempts to implement it in the afternoon. Let's take a look at the 5 minute chart and see what happened. It is clearly seen how, even amid the absence of important fundamental reports, bulls on the euro managed to protect the support at 1.1723 on their own, forming an entry point into long positions from there, after which there was an upward movement by 30 points. A similar situation was formed during the US session, but this did not lead to a powerful upward momentum.

Considering that the Federal Reserve will hold a rather important meeting on monetary policy today, it is unlikely that one can count on the accented movement in a certain direction in the first half of the day. Attention will be drawn only to the report on the indicator of consumer confidence in the eurozone, which may decline in September compared to August, and this will put even more pressure on the euro. Do not forget about voting in the US Congress on the national debt limit, which can also lead to a surge in volatility. From a technical point of view, only the nearest levels have changed, while the strategy remains the same. Forming a false breakout at the level of 1.1706 generates a signal to open long positions against the trend in hopes of an upward correction to the first resistance of 1.1740. A breakthrough of this range and its reverse test from top to bottom will create another entry point into long positions in continuation of the euro's growth with the renewal of the 1.1774 high, where I recommend taking profits. The next target will be the area of 1.1810. In case EUR/USD falls in the first half of the day and traders are not active in the 1.1706 area, and we also receive weak data on consumer confidence, you can open long positions in EUR/USD after a false breakout in the 1.1676 area, but I advise you to buy EUR/USD immediately on a rebound. only at a low like 1.1652, or even lower - around 1.1628, counting on an upward correction of 15-20 points within the day. 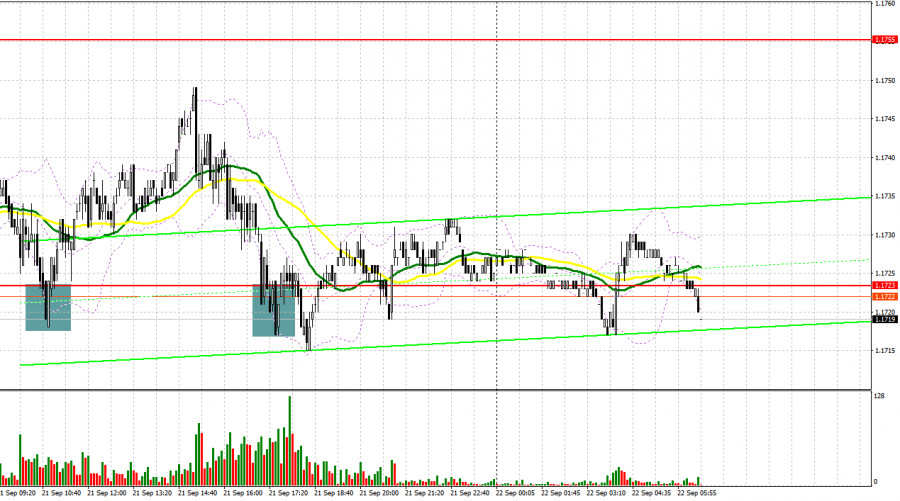 Bears will try to control the market and be active in every possible way during an upward correction in the pair. The lack of important reports on the European economy will only play into their hands. Forming a false breakout in the 1.1740 area will result in creating the first entry point to short positions, counting on the pair's decline within the day. The next goal will be a breakthrough and consolidation below the support at 1.1706. A reverse test of this level from the bottom up will return pressure to the pair and create another signal to sell the euro with a renewal of the 1.1676 low. The next target will be the area of 1.1652, where I recommend taking profits. If EUR/USD rises in the first half of the day and there are no bears at 1.1740, it is best to postpone short positions until the test of the larger resistance at 1.1774. I advise selling the pair immediately on a rebound counting on a downward correction of 15-20 points only from a new high of 1.1810. 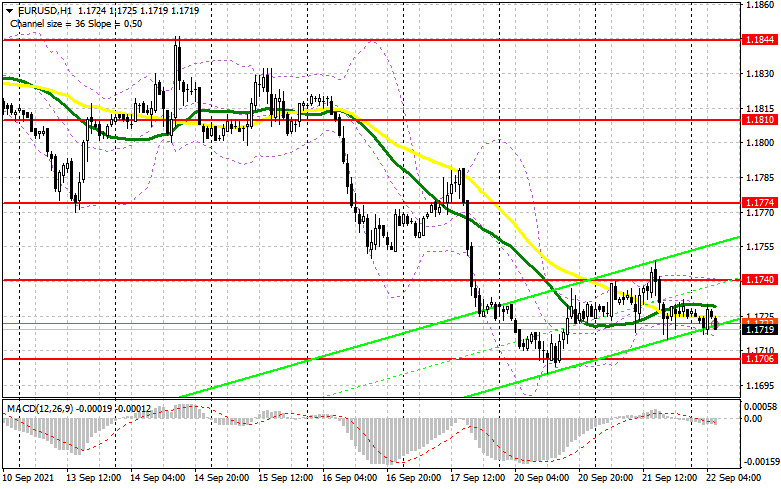 Trading is carried out in the area of 30 and 50 moving averages, which indicates the market uncertainty ahead of the release of important fundamental reports.

Volatility has decreased, which does not provide signals to enter the market based on the indicator.