EUR/USD: plan for the European session on September 23. COT reports. FOMC decision on the main interest rate supported the

Yesterday was quite calm until the announcement of the Federal Reserve's decision on interest rates, as well as the speech of Chairman Jerome Powell. Let's take a look at the 5 minute chart and talk about what happened. In the first half of the day, there were no movements and entry points, since the price did not reach the levels I indicated. A false breakout at 1.1748 during the US session resulted in creating a good signal to sell the euro, which quickly dumped the trading instrument to a low like 1.1718, and then to a larger support at 1.1692, where trading ended. 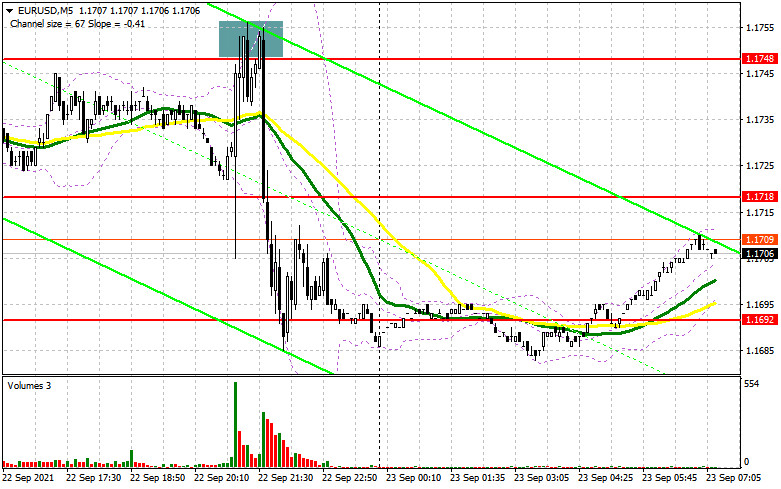 Yesterday, the US central bank announced that it could begin cutting the asset purchase program in November this year and complete it in full by mid-2022. This is a rather strong bearish signal for the European currency. However, many traders expected exactly this scenario, so it is possible that if the bulls try, the demand for the pair will return in the near future and we will see a reversal of the downward trend in September. The indices of activity in the manufacturing and services sectors for the eurozone countries will be published today. Particular attention should be paid to the composite PMI of the euro area, whose growth can help the euro to cope with its problems. Also, an economic bulletin from the ECB and representatives of the European Central Bank will speak in the morning, which will be another reason to build up long positions. The primary task of the bulls is now to form a false breakout at the level of 1.1692, which was formed following the Asian session. Opening long positions against the trend is possible on an upward correction to the first resistance at 1.1723, just below which the moving averages play on the bears' side, which will greatly limit the pair's upward potential. A breakthrough of this range and its reverse test from top to bottom will create another entry point into long positions in continuation of the EUR/USD growth with the renewal of the high of 1.1754, from which the bears were so active yesterday. The next target will be the area of 1.1776, where I recommend taking profits. In case EUR/USD falls in the first half of the day and traders are not active around 1.1692, as well as weak data on activity in the eurozone countries, you can open long positions in EUR/USD after a false breakout in the 1.1665 area, but buy EUR/USD immediately at a rebound only at a low like 1.1628, or even lower - in the 1.1604 region, counting on an upward correction of 15-20 points within the day.

Bears will try to control the market further, showing activity in every possible way during an upward correction in the pair. Weak fundamental data on the European economy will serve as a pretext for opening new short positions. A false breakout in the 1.1723 area, to which the pair is now gradually recovering, will result in forming the first entry point to short positions in hopes of a further downward trend within the day. An equally important goal is a breakthrough and consolidation below the support at 1.1692. A reverse test of this level from the bottom up will return pressure to the pair and form another signal to sell the euro with a renewal of the 1.1665 low. The next target will be the area of 1.1628, where I recommend taking profits. If EUR/USD rises in the first half of the day and there are no bears at 1.1723, it is best to postpone selling until the test of the larger resistance at 1.1754. I advise to sell the pair immediately on a rebound counting on a downward correction of 15-20 points only from a new high of 1.1776. 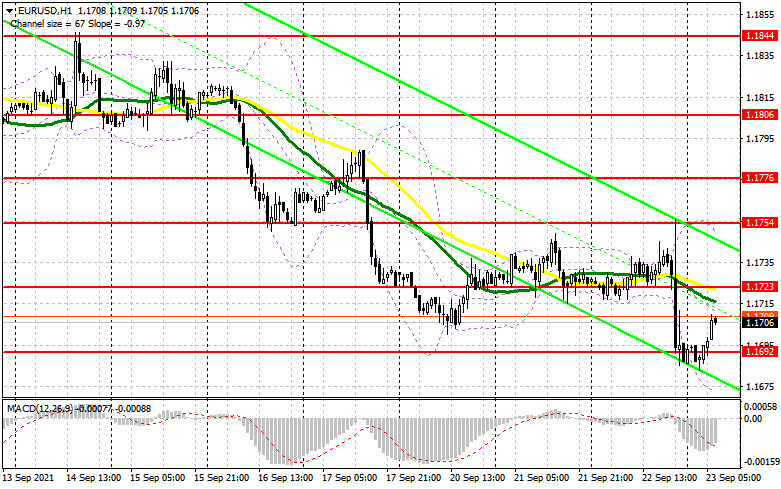 Trading is under the 30 and 50 moving averages, which indicates a resumption of the bear market.

The fall of the euro will be limited in the area of the lower border of the indicator in the area of 1.1670. Growth is limited by the upper level of 1.1745.