EUR/USD: plan for the European session on September 24. COT reports. Euro bulls are determined to break 1.1754

This morning we are waiting for quite interesting data on the indicator of the business environment, the indicator of expectations and the indicator of the situation from IFO Germany, which may slightly decrease in September. If the indicators exceed economists' forecasts, this will be an additional driver for the buildup of long positions in the euro in continuation of the upward correction. However, the main goal will be a breakthrough and consolidation above the 1.1754 resistance, from which we observed a rather large euro sell-off on Wednesday. Only such a scenario will lead to forming a new entry point into long positions with a subsequent recovery of the pair to the 1.1776 area. The next target will be the area of 1.1806, where I recommend taking profits. However, it will only be possible to reach this level closer to the second half of the day, when Federal Reserve Chairman Jerome Powell's next speech will take place. In the event that EUR/USD declines during the European session, the bulls' primary task is to protect the support at 1.1723, where the moving averages play on their side. Only a false breakout there will lead to forming a signal to open long positions in hopes of an upward correction to the resistance of 1.1754. If the bulls are not active in the 1.1723 area, the situation may become seriously complicated. Weak data for Germany may lead to a breakthrough of this range. In this case, I advise you to open long positions in EUR/USD only after a false breakout in the 1.1692 area, but you can buy the euro immediately on a rebound only at a new local low of 1.1665, or even lower - in the 1.1628 area, counting on an upward correction of 15-20 points within the day. 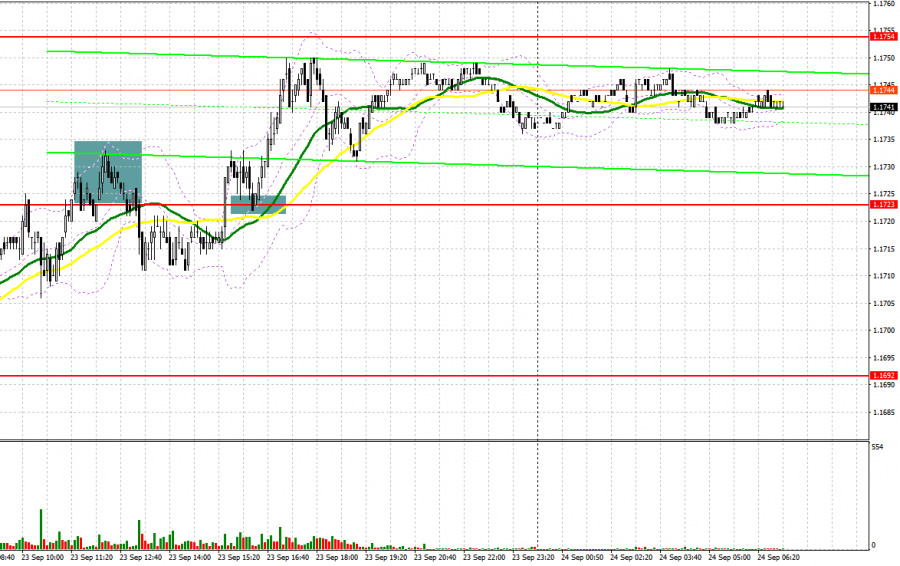 The bears will try to regain control of the market, and for this they need very weak data on Germany for September and firm statements from Powell about the intention to actively scale down the program to buy bonds later this year. The first priority is to protect the resistance at 1.1754. Forming a false breakout there will lead to creating the first entry point to short positions, counting on a further downward trend within the day. An equally important goal is a breakthrough and consolidation below the support at 1.1723, which acts as a kind of middle of the temporary horizontal channel. A reverse test of this level from the bottom up will return the pressure to the pair and form another signal to sell the euro with a renewal of the week low of 1.1692. A breakthrough of this range will open a direct road to new levels 1.1665 and 1.1628, where I recommend taking profits. If EUR/USD rises in the first half of the day and there are no bears at 1.1754, it is best to postpone selling until the test of the larger resistance at 1.1776. I recommend selling the pair immediately on a rebound counting on a downward correction of 15-20 points only from a new high of 1.1806. 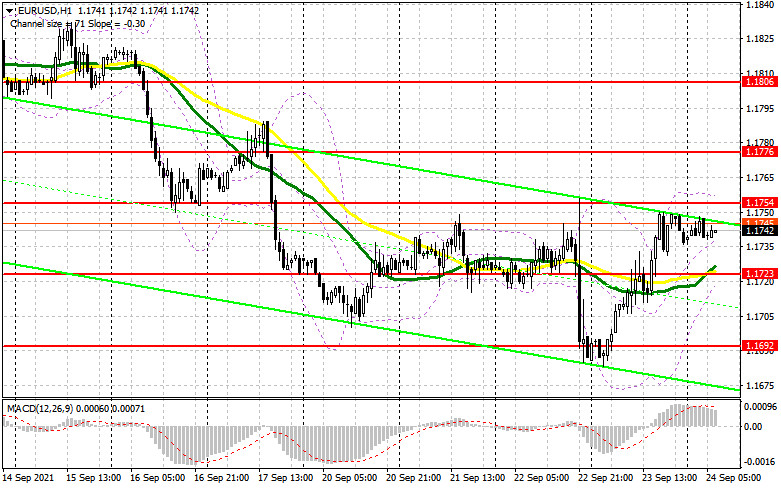 Trading is carried out above 30 and 50 moving averages, which indicates an attempt to continue the upward correction in the pair.