EUR/USD: plan for the European session on September 27. COT reports. Euro trapped in the channel. Further growth is a big

Despite the fact that the data for Germany that was released on Friday morning had turned out to be slightly better than economists' forecasts, the decline in two of the three indicators of the business environment did not allow the euro bulls to continue the upward correction of the pair. An afternoon speech by Federal Reserve Chairman Jerome Powell bolstered the US dollar, trapping EUR/USD in a horizontal channel. However, if we look at the 5-minute chart, we will see that there were no good entry points to the market. The breakthrough and consolidation below 1.1723 took place without a reverse test of this level from the bottom up, to which just a couple of points were missing. Therefore, I was forced to stay out of the market.

Important fundamental reports will not be released in today's first half of the day, however, it is still worth paying attention to the report on the volume of lending to the private sector in the eurozone, as it indirectly indicates the pace of economic recovery. The speech of European Central Bank President Christine Lagarde may also refer to monetary policy and further views of the central bank on the situation in the economy, which will support the euro. Considering that it was not possible to rise above last week's high on Friday, the main target of the bulls will be a breakthrough and consolidation above the intermediate resistance of 1.1736. Only a test of this area from top to bottom will lead to forming a new entry point into long positions, followed by a recovery of the pair to the 1.1756 area. The next target will be the range of 1.1775, where I recommend taking profits. In the event that EUR/USD declines during the European session, the bulls' primary concern will be to protect the support at 1.1705. Forming a false breakout there will result in creating a signal to open long positions in hopes of an upward correction to 1.1736. If the bulls are not active in the 1.1705 area, the situation may become more complicated. In this case, the bulls will have to defend last week's lows in the 1.1684 area. Forming a false breakout there creates an entry point into long positions, but buying the euro immediately on a rebound is possible only at a new local low of 1.1665, or even lower - around 1.1628, counting on an upward correction of 15-20 points within the day. 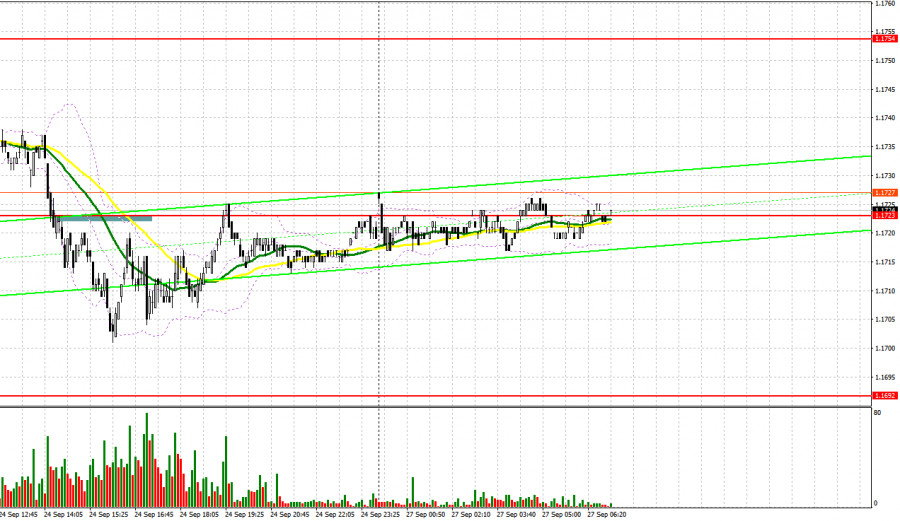 The bears will continue to try to regain control of the market, and for this they need very weak data on lending in the eurozone, as well as Lagarde's statements that the central bank is not going to rush to curtail the asset purchase program and intends to continue to adhere to a super soft policy. These statements will weaken the euro's position and push the pair to fall to the week's intraday lows. However, the first priority for the bears is to defend the resistance at 1.1736, which was formed last Friday. Forming a false breakout there creates the first entry point to short positions in hopes of a further downward trend. An equally important goal of the bears will be a breakthrough and consolidation below the support of 1.1705, which acts as a kind of lower border of the temporary horizontal channel. A reverse test of this level from the bottom up will return the pressure to the pair and create another signal to sell the euro with the renewal of last week's low at 1.1684. A breakthrough of this range will open a direct road to new levels 1.1665 and 1.1628, where I recommend taking profits. If EUR/USD rises in the first half of the day and there are no bears at 1.1736, it is best to postpone selling until the test of the larger resistance at 1.1756. I advise selling the pair immediately on a rebound counting on a downward correction of 15-20 points only from a new high of 1.1806. 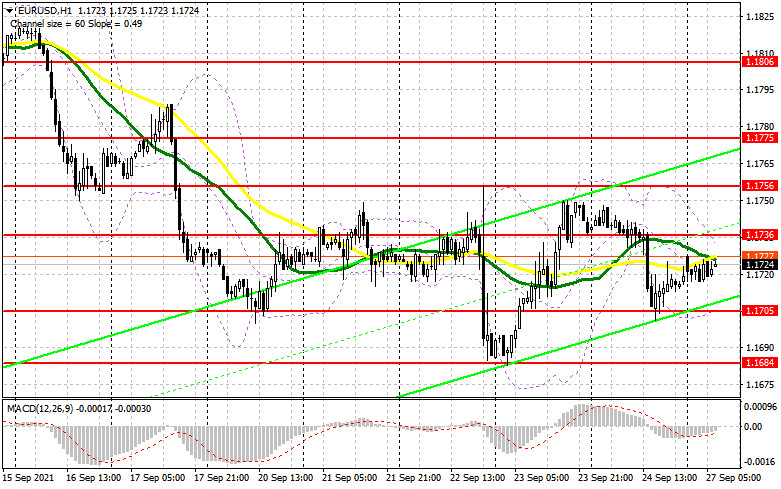 Trading is carried out in the area of 30 and 50 moving averages, which indicates market equilibrium.

Interesting? Write a comment below.
 EUR/USD: plan for the European session on September 27. COT reports. Euro trapped in the channel. Further growth is a big
Forward 
Backward 