EUR/USD: plan for the European session on September 29. COT reports. Euro trapped in the channel. The further fall of the

Trading the euro yesterday was not something interesting. Despite a number of speeches by important political figures, the volatility of the currency market remained at a low. In yesterday's morning forecast, I drew attention to the 1.1683 level and recommended making decisions based on it. Let's take a look at the 5 minute chart and talk about what happened. It is clearly seen that after the breakthrough and the bulls' failure to regain control over the level of 1.1683, the pair returns below this level, which results in forming a signal to sell the euro. However, it never came to a major sale. In the second half of the day, several signals were formed to buy the euro in the 1.1674 area, but the most that could be achieved from the market was a movement to the upside by 25 points, which is almost all intraday volatility.

This morning, the focus will shift to the indicator of consumer confidence in the eurozone. A decrease may undermine the confidence of euro bulls in an upward correction, which will lead to another update of weekly lows. We are also waiting for another number of speeches by the representatives of the US Federal Reserve, along with Chairman Jerome Powell. Do not forget about the speech of European Central Bank President Christine Lagarde, who has recently been talking a lot about inflation and super-soft monetary policy, which does not allow the euro to properly pull itself together and strengthen its position against the US dollar. An important task in the first half of the day will be to protect the support at 1.1671, which was formed at the end of yesterday. Only a false breakout there will result in forming a signal to open long positions in hopes of an upward correction to the resistance area of 1.1699. A breakthrough and test of this level from top to bottom, along with good data on consumer confidence in the eurozone, forms a good entry point to long positions in order to restore the pair to the 1.1724 area, and then to the upper border of the sideways channel at 1.1747, where I recommend taking profits. The next target will be the high of 1.1775. If the bulls are not active at 1.1671, I advise you to postpone long positions to new lows around 1.1651 and 1.1631. You can open long positions immediately on a rebound only at the new local support at 1.1605, counting on an upward correction of 15-20 points within the day. 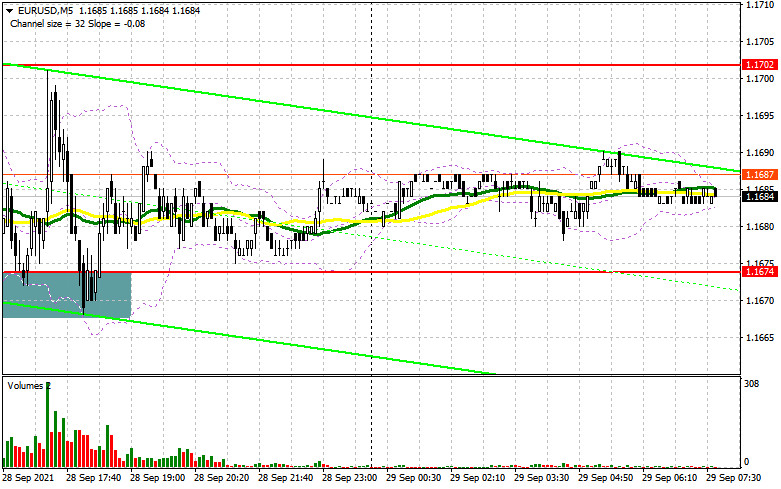 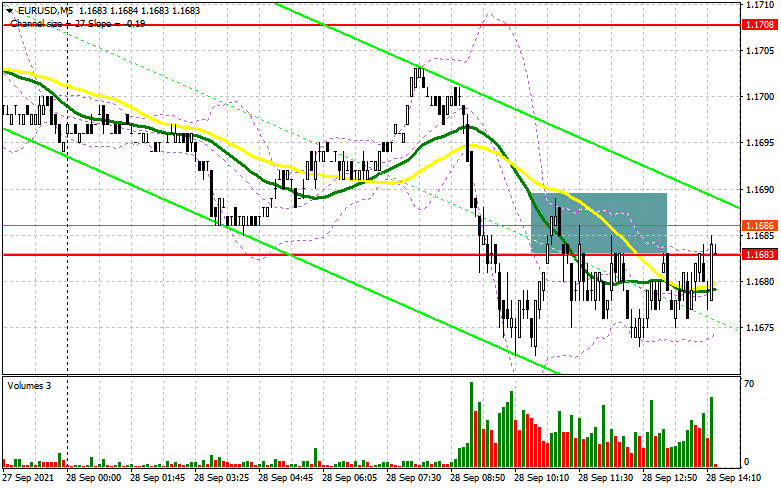 For the bears, nothing has changed since yesterday. They are trying with all their might to keep the market under their control, but so far there are no people who are particularly willing to open short positions even after updating local lows. This casts doubt on the succeeding bear market for the pair. Only the presence of negative news can push the euro below the local weekly lows. A breakthrough of the 1.1671 level, which was formed at the end of yesterday, as well as its renewal from the bottom up, will create a new entry point into short positions in order to pull down EUR/USD to new intraday lows of 1.1651 and 1.1631, where I recommend taking profits. A more distant target will be the low of 1.1605, but we will be able to reach it only if the Fed seriously starts talking about a more active rate of curtailment of soft monetary policy. If EUR/USD rallies in the first half of the day, the bears will need a lot of effort to defend the resistance at 1.1699. Only a false breakout on it can create a good entry point into short positions. If the bears are not active at 1.1699, it is best to postpone short positions until the test of the larger resistance at 1.1724. I advise you to open short positions immediately on a rebound, counting on a downward correction of 15-20 points only from a new high of 1.1747. 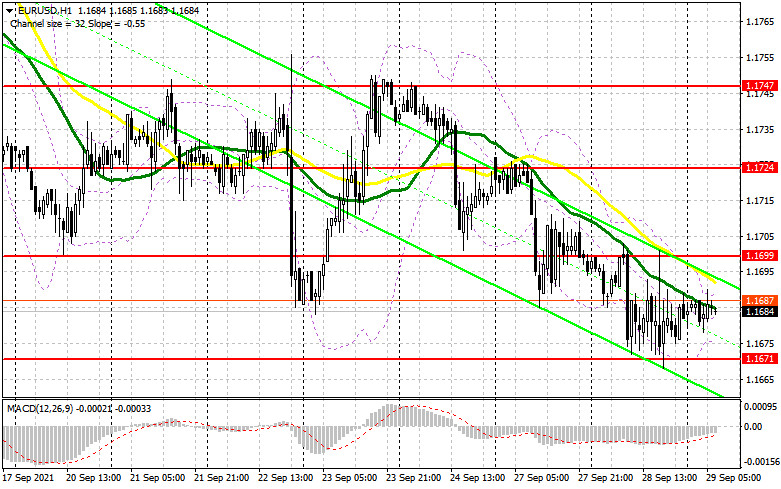 The Commitment of Traders (COT) report for September 21 revealed a sharp increase in short positions and only a slight increase in long positions, which is due to the lack of desire among traders to bet on strengthening risky assets at the beginning of this fall. The prospect of changes in the monetary policy of the Federal Reserve in November this year maintains demand for the US dollar, as many investors expect the start of a reduction in the bond purchase program from the central bank. The fact that inflation in the United States of America is almost out of control by the Fed speaks of possible more aggressive actions by the end of the year, which could seriously affect the sentiment of traders and investors. This week there will be a fairly large number of speeches by both the Fed and Chairman Jerome Powell, which may shed light on how the central bank will act in any given situation. Considering that energy prices continue to fly up, which will certainly affect the producer and consumer price index, specifics from the Fed would certainly not interfere with the markets. The demand for risky assets will remain limited due to the high likelihood of another wave of the spread of the coronavirus, and its new strain Delta. All this will force the European Central Bank to continue to adhere to a wait-and-see attitude and maintain its stimulating policy at current levels, since there are no serious inflationary problems in the eurozone so far. The COT report indicated that long non-commercial positions rose only slightly - from 186,554 to 189,406, while short non-commercial positions jumped quite seriously - from 158,749 to 177,311. At the end of the week, the total non-commercial net position dropped from the level of 27,805 to the level of 12,095. The weekly closing price also dropped to 1.1726 from 1.1809.

Trading is carried out in the area of 30 and 50 moving averages, which indicates market equilibrium.

The volatility is very low, which does not provide signals to enter the market based on the indicator.

Interesting? Write a comment below.
 EUR/USD: plan for the European session on September 29. COT reports. Euro trapped in the channel. The further fall of the
Forward 
Backward 