Forecast and trading signals for EUR/USD on September 17. Detailed analysis of the pair's movement and trade deals. An unexpected 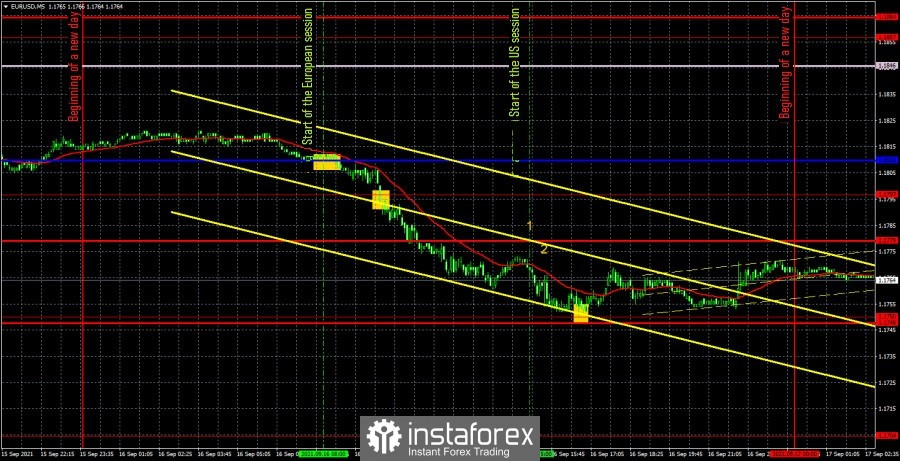 The volatility for the EUR/USD pair sharply increased and reached 70 points on Thursday. This is not the highest value, but it is already much closer to "normal". Along with the growth of volatility, the number of trading signals immediately increased, and most importantly, profitable and strong trading signals. There were few macroeconomic statistics today and, in fact, had no effect on the pair's movement. The only report of the day - retail sales in the US - turned out to be higher than forecasted, but by the time this report was published, the pair had already gone almost all its way down (figure "2" in the chart). European Central Bank President Christine Lagarde was also scheduled to speak (figure "1" in the chart), but after that there was no particular market reaction either. Let's move on to trading signals. The first signal was formed at the opening of the European trading session. The price settled below the Kijun-sen line, so traders had to open short positions. Subsequently, the price overcame the extremum level of 1.1797, the support level of 1.1779 and perfectly worked out the extremum level of 1.1750 in terms of accuracy. A rebound from this level was a signal to close short positions and open long positions. Thus, it was possible to get a profit of 45 points on the short position. After opening a long position, the movement was already significantly weakened, so it was not possible to reach the nearest target level. Nevertheless, traders could have made a profit of 5-10 points on this trade as well. As a result, as soon as volatility increased, tangible profits were immediately obtained.

Overview of the EUR/USD pair. September 17. The dollar went up unexpectedly. Did the markets believe in the removal of incentives? 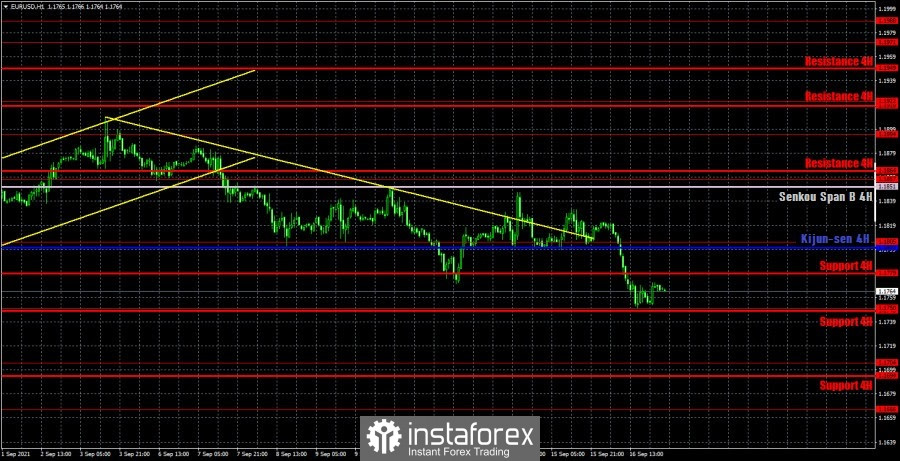 On the hourly timeframe, you can see that the downward trend remains in effect despite the fact that the price crossed the downward trend line several times, which was also rebuilt. Thus, the downward trend is now indistinct, and yesterday's downward movement looks very strange, since it was not triggered by any specific event. Nevertheless, the increase in volatility is very good. Since the level of 1.1750 could not be overcome, further downward movement is still in question. On Friday, we continue to draw the attention of traders to important levels and lines - 1.1666, 1.1704, 1.1750, 1.1805, 1.1857, as well as the Senkou Span B (1.1851) and Kijun-sen (1 , 1800). The Ichimoku indicator lines can change their position during the day, which should be taken into account when looking for trading signals. Signals can be rebounds or breakthroughs of these levels and lines. Do not forget about placing a Stop Loss order at breakeven if the price moves 15 points in the right direction. This will protect you against possible losses if the signal turns out to be false. The US Consumer Sentiment Index from the University of Michigan will be published on September 17. If the value of this index does not differ by 5 or more points from the forecast, then the market reaction to it should not be expected. In addition, a report on inflation in the European Union will also be released. However, this is the second, final estimate for August, so traders are already mentally prepared for 3.0% y/y. It is even more unlikely that there will be a reaction to this report. Today we will see if yesterday's increase in volatility was an accident? 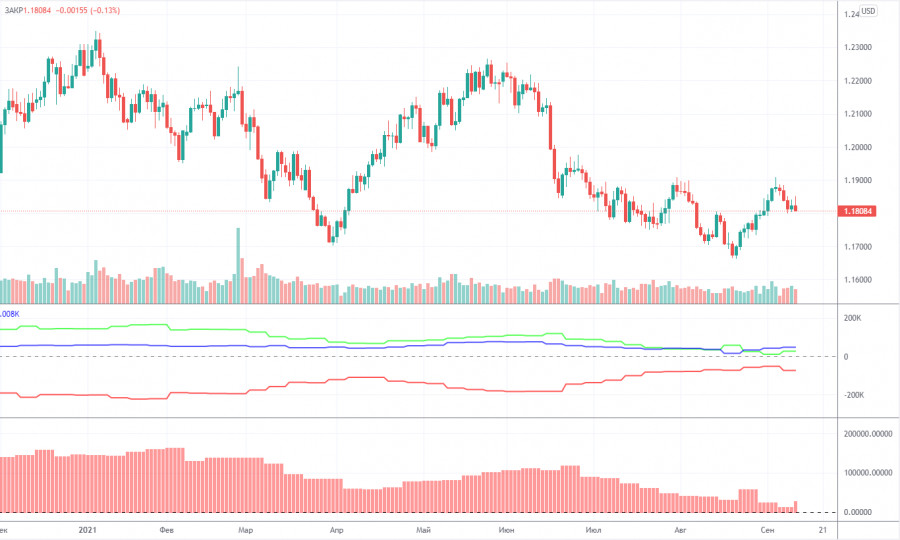 Interesting? Write a comment below.
 Forecast and trading signals for EUR/USD on September 17. Detailed analysis of the pair's movement and trade deals. An unexpected
Forward 
Backward 