Forecast and trading signals for EUR/USD on September 20. Detailed analysis of the pair's movement and trade deals. Dollar 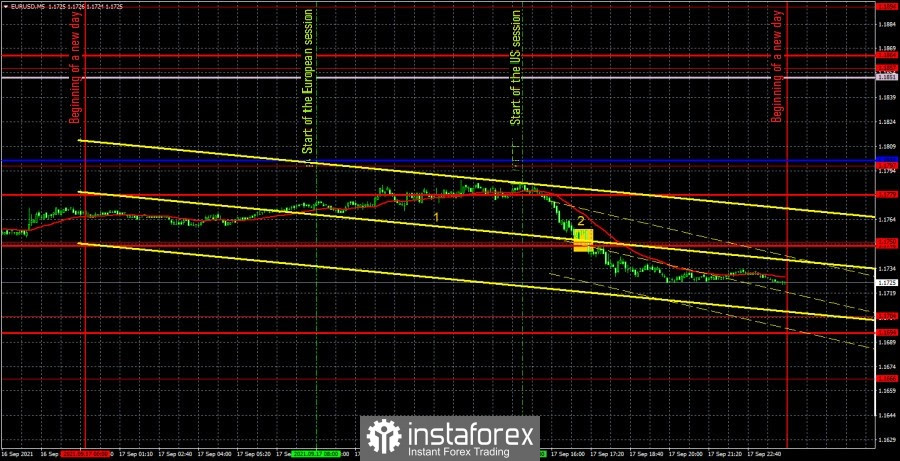 The volatility for the EUR/USD pair remained quite high and amounted to 63 points during the last trading day of the week. Although 63 points is not a "high" value even for the euro/dollar pair. Nevertheless, the pair did not stand in one place. At least in the afternoon. Thus, the dollar showed growth for the second consecutive day, which can only be attributed to the upcoming Federal Reserve meeting and positive market expectations regarding the curtailment of the QE program. All the macroeconomic statistics on Friday had no impact on the pair's movement. The report on European inflation (marked with the number "1" in the chart), as we can see, did not cause any reaction from the markets. However, this was the second estimate of the indicator, which did not differ from the first, - 3.0% y/y. Thus, it is not surprising that there was no reaction. The second report - the US consumer sentiment index - turned out to be worse than expected, but the US dollar still continued to grow. Therefore, it also did not provoke any reaction. Now let's analyze the trading signals. In fact, not a single trading signal was formed in the first half of the day. There was one for selling in the second half of the day, when the price overcame the extreme level of 1.1750. Unfortunately, this signal was formed near the end of the downward movement, so it was not possible to earn a lot on it. However, a short position could bring traders about 15 points of profit, which is better than nothing, or than a loss. 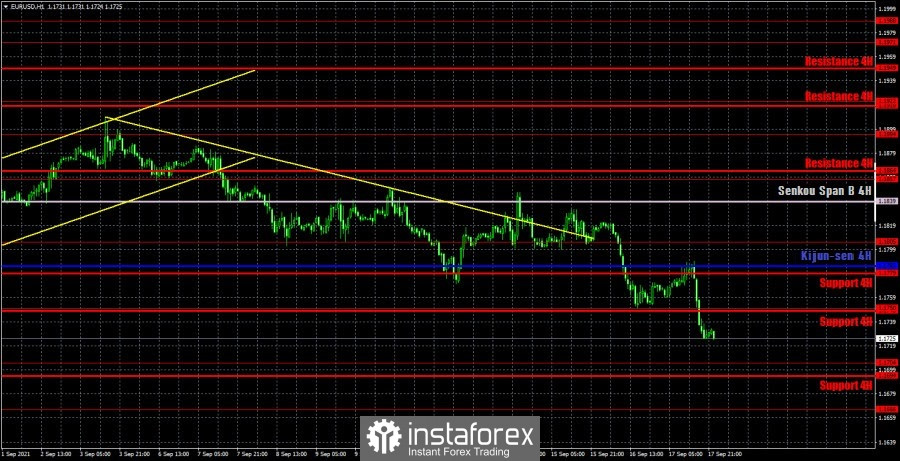 It can be seen on the hourly timeframe that the downward trend remains in effect despite the fact that the price crossed the downward trend line several times, which was also rebuilt and eventually canceled. Thus, the downward trend is now indistinct, but nevertheless persists. We continue to believe that the dollar's appreciation over the past two days is directly related to the Fed meeting, the results of which will be announced on Wednesday. Thus, the rise in the dollar may be short-lived. On Monday, we continue to draw the attention of traders to important levels and lines - 1.1666, 1.1704, 1.1750, 1.1805, 1.1857, as well as Senkou Span B (1.1839) and Kijun-sen (1 , 1785). The Ichimoku indicator lines can change their position during the day, which should be taken into account when looking for trading signals. Signals can be rebounds or breakthroughs of these levels and lines. Do not forget about placing a Stop Loss order at breakeven if the price moves 15 points in the right direction. This will protect you against possible losses if the signal turns out to be false. There will not be a single important event or publication in the United States and the European Union on September 20. Thus, traders will have nothing to react to during the day. Nevertheless, the euro/dollar pair may move quite actively ahead of the Fed meeting. You need to be ready for this. 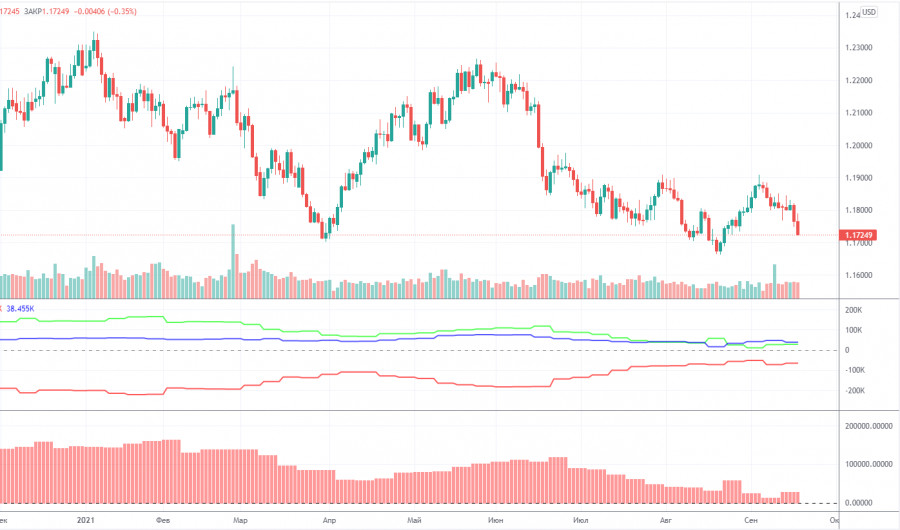 The EUR/USD pair fell by 60 points during the last reporting week (September 7 - 13). The latest Commitment of Traders (COT) report showed minimal changes in the mood of the "non-commercial" group of traders, which, we recall, is the most important group of traders. During the reporting week, professional traders closed 4,000 contracts for buying (longs) and the same number for selling (shorts). Thus, the net position has not changed, as well as the mood of the major players. But serious changes followed in the "commercial" group, where traders immediately closed 27,000 contracts for buy (;ongs) and 36,000 contracts for sell (shorts). These data are less important, but still the difference is striking. Returning to commercial traders, the total number of buy contracts (longs) they now have is 187.5 thousand, and sell contracts-160 thousand. Thus, the bullish mood still persists, but it has significantly weakened in recent months. Therefore, we can say that the euro/dollar pair is currently teetering on the edge of an abyss called a "new downward trend". In principle, we have already said that the critical point for maintaining the long-term upward trend, which began in March 2020, is the level of 1.1700. If the bears manage to overcome it after a 9-month ordeal, then the chances of further strengthening of the US currency will increase sharply. Therefore, this issue may be resolved in the coming days. On the other hand, much will depend on the actions of the Fed not only at the next meeting, but also in the near future. If the markets do not find evidence of readiness to curtail QE, then the US dollar will lose its trump card in the confrontation with the euro currency.