Forecast and trading signals for EUR/USD on September 28. Detailed analysis of the pair's movement and trade deals. Bears 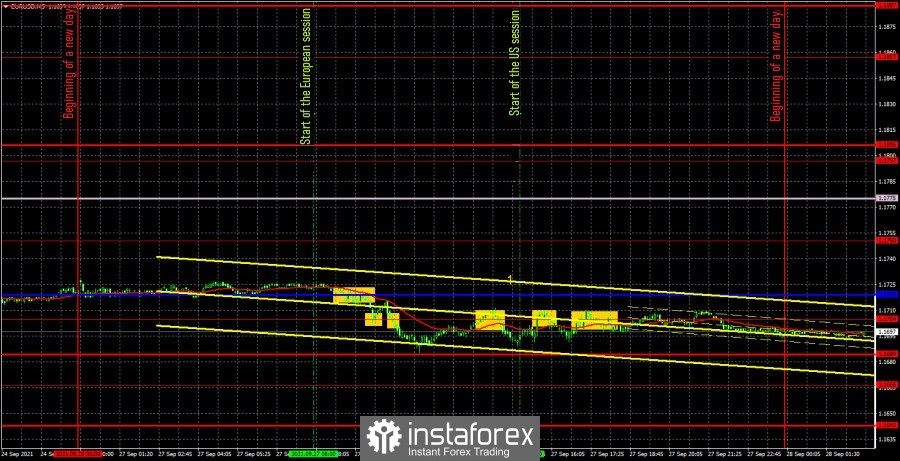 The EUR/USD pair tried to continue the downward movement during the first trading day of the week, but, by and large, again without much success. It surpassed the 1.1704 level, and even went below it for a while. However, volatility was low again, and the pair spent most of the day in a sideways movement between the levels of 1.1684 and 1.1710. That is, a flat was observed for most of the day. Unfortunately, trading in a flat is very difficult, as we have said more than once. However, you have to work with what you have. Recall that the dollar has been appreciating for several consecutive weeks, but it is doing so at an exceptionally imposing pace. The pair failed to settle below the level of 1.1704 on higher timeframes. Moreover, this is not the first unsuccessful attempt to overcome this level. Thus, either the pair will continue to creep down 20-30 points a day. Or it will finally start a strong upward movement that could bring it back to the highs of the year. There were no macroeconomic reports on Monday. There was also no fundamental background. European Central Bank President Christine Lagarde was scheduled to speak on Monday, but judging by the volatility, she did not mention anything interesting. This is not surprising, since the ECB meeting has already taken place, and no decisions have been taken. As for trading signals, there were quite a large number of them, but most of them were false ones due to the flat. The first sell signal was generated when the price crossed the Kijun-sen line at the beginning of the European session. The bears got off to a good start. The level of 1.1704 was overcome almost immediately. However, there was a distance of only 15 points between the 1.1704 and Kijun-sen lines, so they should be considered in conjunction with each other, as a support area. Thus, the short position should have been kept open until re-consolidation above the critical line, which did not happen. In the middle of the European session, the support level of 1.1684 (1 point error) was almost worked out, from which a rebound followed. This is where the short position should have been closed. The profit is small, but it is still there - 15 points. This was followed by three price rebounds from the level of 1.1704. Traders could also process these signals with a single short position. However, the price did not manage to continue its downward movement, therefore, in the late afternoon, the deal should have been closed with zero profit.

Overview of the EUR/USD pair. September 28. Inflation in the European Union may continue to accelerate, forcing the ECB to end the PEPP program. 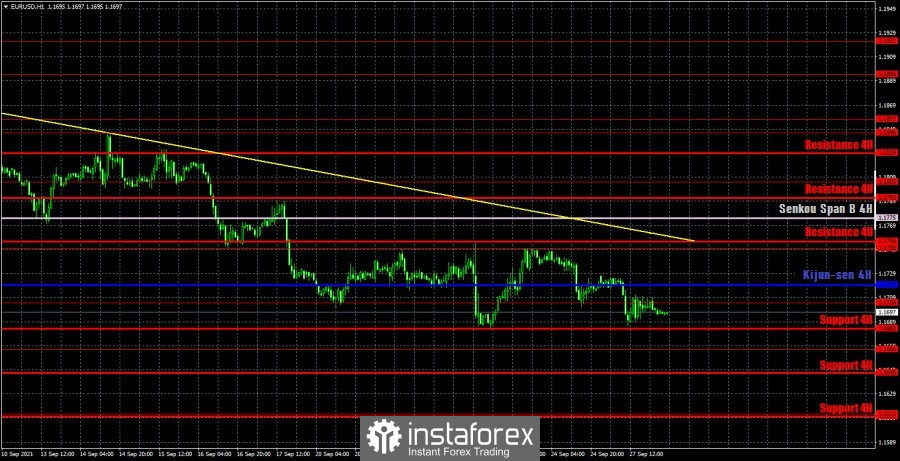 You see that the euro/dollar pair continues to be in a weak downward trend on the hourly timeframe. The price has been near the important level of 1.1704 for more than a week and cannot overcome it in any way. Recall that a confident breakthrough of this level is a condition for the EUR/USD pair's succeeding decline. But consolidating quotes above the trend line, on the contrary, will allow the pair to start forming a new upward trend. On Tuesday, we highlight the following levels for trading - 1.1612, 1.1666, 1.1704, 1.1750, 1.1805, as well as the Senkou Span B (1.1775) and Kijun-sen (1.1719) lines. The Ichimoku indicator lines can change their position during the day, which should be taken into account when looking for trading signals. Signals can be rebounds or breakthroughs of these levels and lines. Do not forget about placing a Stop Loss order at breakeven if the price moves 15 points in the right direction. This will protect you against possible losses if the signal turns out to be false. One more speech by Lagarde on September 28, as well as speeches by US Treasury Secretary Janet Yellen and Federal Reserve Chairman Jerome Powell, can be distinguished from the important events. These are potentially very important events, but everything will depend on what the high-ranking officials say. Yellen will probably be talking about the US national debt limit. Powell can also touch on this topic, but he is still expected to hint more about the November reduction in the quantitative stimulus program. Not a single important macroeconomic report will be released today. 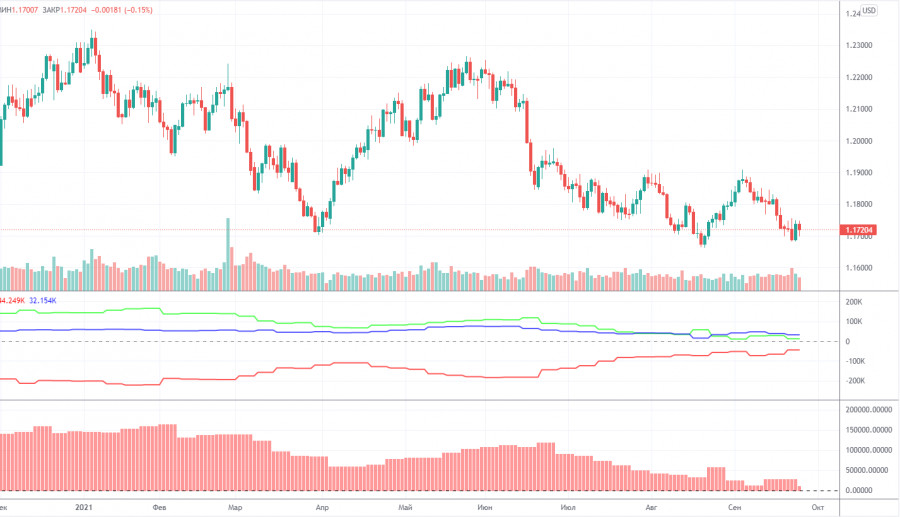