Forecast and trading signals for GBP/USD for September 3. Detailed analysis of the pair's movement and trade deals. Pound

The GBP/USD pair moved up on September 2. The volatility of the day was about 70-80 points, which is the average value for the pound. Even closer to the "weak" side. However, the movement itself was quite good. At least it could and should have been worked out. Yet these are not 40 points, which we see almost every day on the EUR/USD pair. It should be noted right away that not a single important report was published in the UK yesterday either. And in general there was not a single important and interesting event. Thus, the rather strong movement of the pair in the afternoon could not be triggered by statistics or the foundation. In general, the pound continues to rise in the same way as the euro. Likewise, meeting our expectations. Now let's start analyzing trading signals and deals on them. By and large, only one trading signal was formed during the past day. In the middle of the European session, the price came close to the resistance area 1.3785-1.3794 and tried to settle above it. It took about six hours, so we can't call this a clear buy signal. However, it was still formed, so traders had the opportunity to open long positions at the beginning of the US session. Around 1.3800. Subsequently, the price went up about 20-30 points more, but could not reach the nearest extreme level 1.3886, which is located too far. Thus, a long position should have been manually closed above the resistance level of 1.3821.

Overview of the EUR/USD pair. September 3. EU and US central banks: Much talk, little deal.

Overview of the GBP/USD pair. September 3. Formal concessions to Scotland were made in Great Britain. 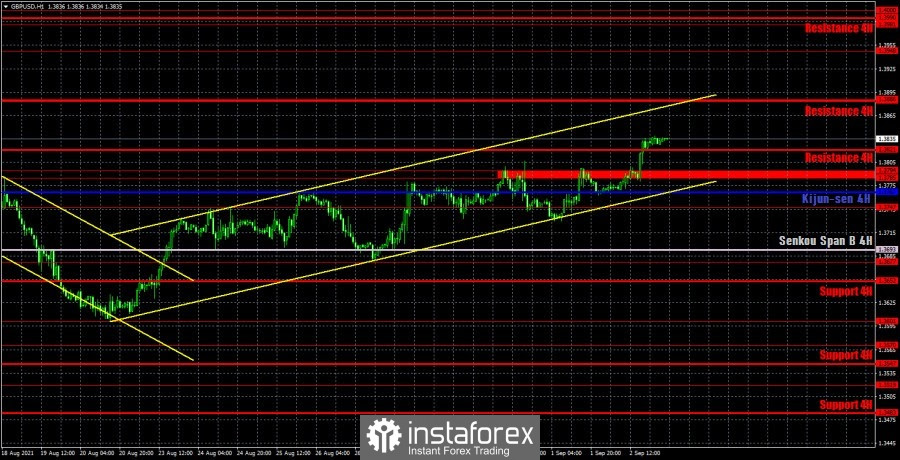 The pound/dollar pair continues its upward movement within the rising channel on the hourly timeframe. In some ways, the stability of the current movement clearly cannot be denied. After the bears tried to settle below the rising channel but failed, the upward movement resumed. Also, the price overcame the important resistance area at 1.3785-1.3794. So, now the chances of rising further have increased. However, everything will depend on today's NonFarm Payrolls report. We continue to draw the attention of traders to the most important levels and recommend trading from them: 1.3677, 1.3747, 1.3785 - 1.3794, 1.3886. Senkou Span B (1.3693) and Kijun-sen (1.3767) lines can also be sources of signals. It is recommended to set the Stop Loss level at breakeven when the price passes 20 points in the right direction. The Ichimoku indicator lines can move during the day, which should be taken into account when looking for trading signals. On Friday, September 3, the UK will release its Service Business Report for August. Let us recall that it is the service sector that reacts most sharply to any social or epidemiological crisis. Therefore, if the increase in cases of Covid in the UK and the United States in recent weeks affects the economies of these countries, then this can be seen in the decrease in business activity in the service sectors. As such, the US ISM index in the afternoon will also make a difference for traders and markets. But the main focus, of course, will be on the report on the number of new jobs created outside the agricultural sector. Reports on wages and unemployment will remain in the shadows. So, today there will be a fairly large amount of macroeconomic statistics and, in principle, each report can somehow affect the movement of the pound/dollar pair. You should be cautious and careful. 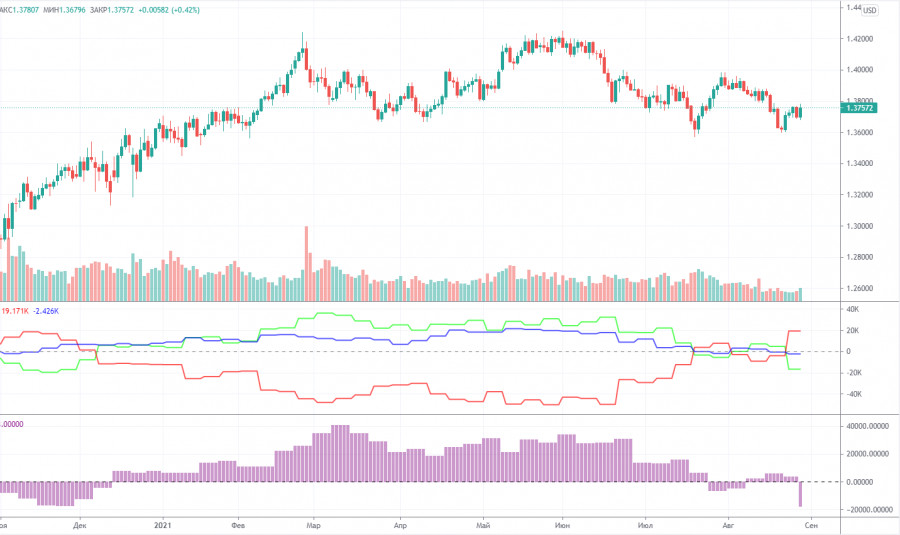 The GBP/USD pair fell by 120 points during the last reporting week (August 17-23). And the number of Buy contracts (longs) of a group of "non-commercial" traders decreased by only 2,000 during the same time. However, the number of Sell contracts (shorts) increased by 19,000. Therefore, something happened in the pound that has not yet happened to the European currency. The mood of large traders has officially changed to bearish, as now they have more open contracts to sell than buy. A bit unexpected. It turns out that major players reduced their net positions in both the euro and the pound in the last reporting week. Was it connected with the same expectations of hawkish rhetoric from Federal Reserve Chairman Jerome Powell, which was not destined to be voiced? One way or another, according to the Commitment of Traders (COT) reports, much more interesting prospects for a decline are opening up for the pound than for the euro. True, all other fundamental and technical factors continue to speak in favor of the dollar's decline, and not vice versa. Therefore, we believe that at this time it is necessary to rely on technical factors. This is the 1.3600-1.3666 area for the pound. A confident breakthrough will allow us to expect a succeeding decline in the pair's quotes. However, since Powell did not report anything that could support the US dollar, it will be difficult for the greenback to count on a new round of appreciation. We also remind you that the "factor of the Fed's cash infusions" continues to work against the dollar, which inflate the money supply and provoke an increase in inflation. In general, even with the readings of the COT reports, the further growth of the dollar is far from obvious.