Forecast and trading signals for GBP/USD for September 17. Detailed analysis of the movement of the pair and trade deals. 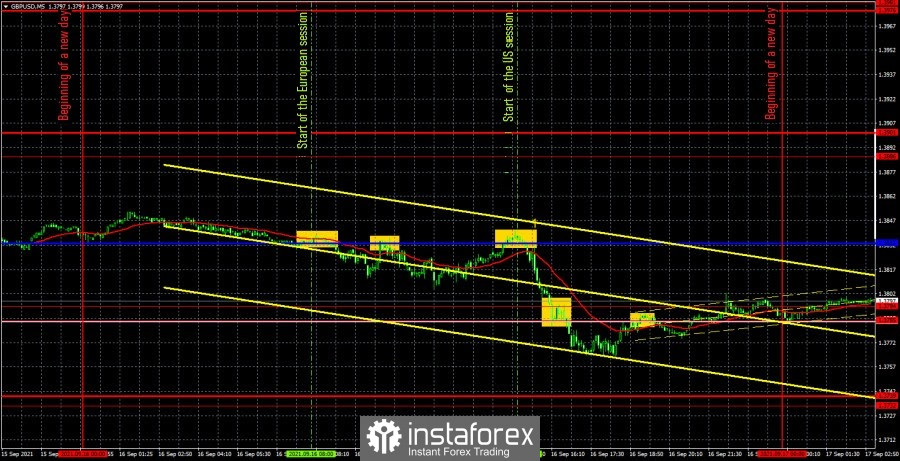 The GBP/USD pair traded as well as the EUR/USD pair on September 16. The volatility of the day was 90 points. Not much, but still better than before. Several good trading signals were immediately formed, which made it possible to earn good money. However, let's first deal with the macroeconomic background. By and large, there is nothing to deal with here, since during the past day there was only one report that deserves attention. Retail sales in the US (the number "1" in the chart) grew much stronger than the experts predicted, so the dollar's appreciation in the US trading session is absolutely logical. However, if there are differences in the movement with the euro/dollar pair, which practically did not react to the same report. However, the pound/dollar pair reacted, as the main downward movement began just after the publication of retail sales. It is good that by that time, as many as three strong sell signals had already been formed in the form of a breakthrough and rebounding from the critical line. Basically, traders only had to open two positions. The first (on the first signal) captured the second signal as well, since the price returned to the Kijun-sen line, but Stop Loss was not set, therefore, when rebounding from this line, one should simply remain in short positions. However, the price once again returned to the critical line after a stronger downward movement, and the short position was closed at breakeven by Stop Loss. But almost immediately, another sell signal was formed, which should also be worked out with a short position. It was this position that brought profit, as the price began a powerful fall and broke through the levels of 1.3794, 1.3785 and the Senkou Span B line. The short could be manually closed only when the price returned to Senkou Span B. The profit on it was about 40 points.

Overview of the EUR/USD pair. September 17. The dollar went up unexpectedly. Did the markets believe in the removal of incentives? 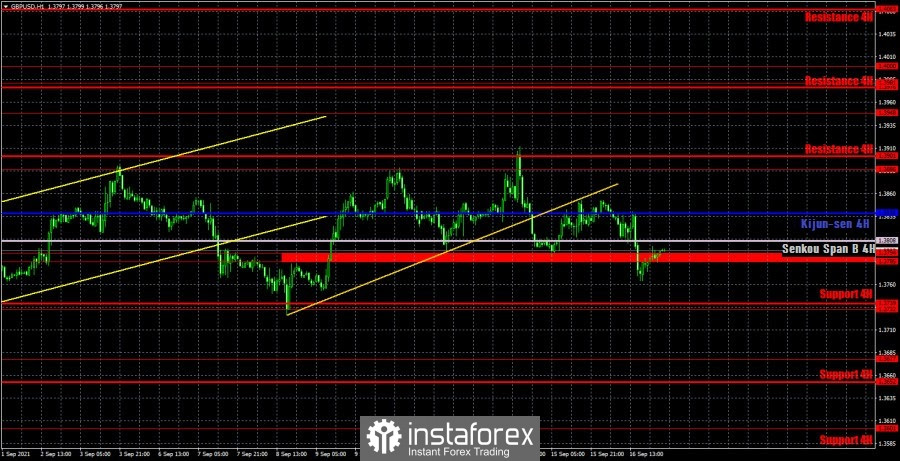 The GBP/USD pair made a significant breakthrough on the hourly timeframe, but at the same time it continues to remain in the channel, which is limited by the levels of 1.3732 and 1.3886. Thus, we have the right to expect that the downward movement will continue to the level of 1.3732, but the dollar's succeeding prospects will depend on whether the bears are able to overcome this level. Recall that we expect the pair to resume an upward trend, but so far the technical picture speaks of a downward trend, therefore, trading should therefore be downward. We also continue to draw the attention of traders to the most important levels: 1.3677, 1.3732, 1.3785 - 1.3794, 1.3886. Senkou Span B (1.3808) and Kijun-sen (1.3838) lines can also be signal sources. It is recommended to set the Stop Loss level at breakeven when the price passes in the right direction by 20 points. The Ichimoku indicator lines can move during the day, which should be taken into account when looking for trading signals. On Friday, September 17th, the UK will release a rather important retail sales report for August. This report can also be reflected in the chart of the currency pair, as well as yesterday's for the US. But in the United States, it is planned to publish only an insignificant consumer sentiment index from the University of Michigan, which will most likely be ignored. 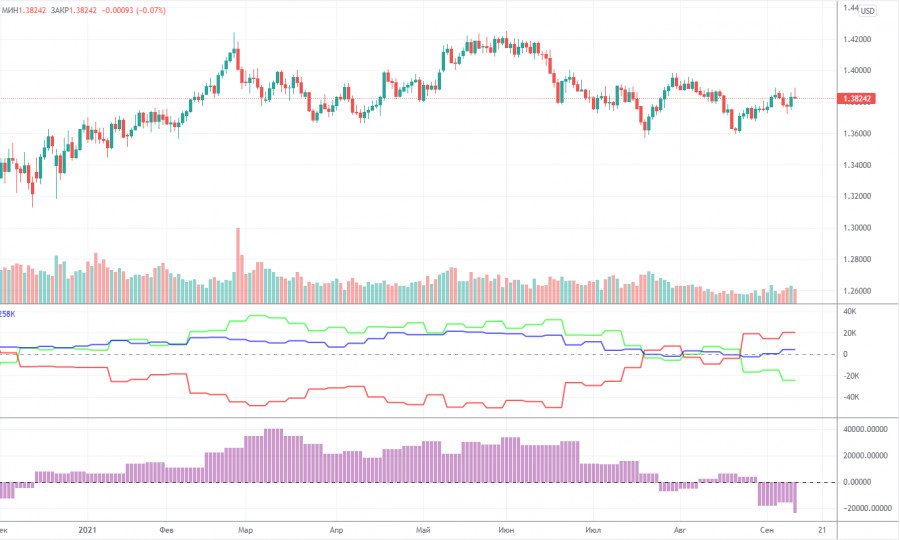 The GBP/USD pair gained 80 points during the last reporting week (August 31 - September 6). The most important group of non-commercial traders continues to decrease their net position, and their mood is becoming increasingly bearish. These changes are clearly visible on the indicators in the chart above. The first indicator clearly shows that the green line (the net position of the "non-commercial" group) has already gone below the zero level and continues to decline. Simply put, the mood of the major players has already changed to bearish and is now only getting stronger. However, we still cannot conclude that the upward trend is over due to the too weak correction against this trend (recall: only 23.6%). It is the weakness of the correction over the past six months that does not allow us to conclude that a new downward trend has begun to form, and not just a correction. Thus, the major players continue to sell off the pound, while the currency itself, after three attempts, could not even go below the target area of 1.3600-1.3666. Therefore, we believe that in the first place in terms of importance is the factor of infusion of hundreds of billions of dollars into the US economy by the Federal Reserve, which ensures the depreciation of the dollar in the long run and does not allow it to strengthen too much in the short term. During the reporting week, non-commercial traders closed 5.5 thousand buy contracts (longs) and opened 2.5 thousand sell contracts (shorts). But despite the fact that the major players are bearish, this does not help the pound/dollar pair to continue moving below 1.3600.

Interesting? Write a comment below.
 Forecast and trading signals for GBP/USD for September 17. Detailed analysis of the movement of the pair and trade deals.
Forward 
Backward 